You can make dulce de leche (a sweet, addictive caramel-like sauce popular in Latin America) three different ways. Whether you prefer to use the stove, an electric pressure cooker, or a slow cooker, you really can’t go wrong!

Each method has slightly different ingredients and preparation, and I share the pros and cons of each one in this post.

When I tested all three methods – stovetop, Instant Pot, and slow cooker – I found that the results were quite different:

From top to bottom, this image shows the dulce de leche made on the stovetop, in an Instant Pot, and using a slow cooker. Each one is totally delicious, but by no means do they taste the same.

Is it worth the effort? If you have the time, the answer is a resounding yes! We had all three in jars in our refrigerator at once and this is the one that I reached for every time.

Aside from the clear visual difference (the color is so much darker), this version has a far more robust flavor than its hands-off counterparts. It is almost like the difference between baking with regular butter rather than browned butter or eating dark chocolate rather than milk chocolate.

It’s also much thinner than the Instant Pot or slow cooker versions, although it can be thickened up.

The Instant Pot produces my second favorite version. It thickens up really nicely and has a full flavor – its flavor is not quite as robust as the stovetop version, but nobody will complain about it. And, for many, this milder flavor is what they think of as the taste of dulce de leche.

It’s the one I reached for when I made my dulce de leche cake.

Finally, we come to the slow cooker method. It is the absolute easiest!

I used to love slow cooker dulce de leche until I tried the other two methods. But, the transformation from sweetened condensed milk to a new caramel-like substance isn’t as dramatic as the other versions.

The problem with this method is inconsistencies between slow cookers.

A mini slow cooker yielded unchanged sweetened condensed milk after a long wait. My full-sized slow cooker produced exactly what I was hoping for. Other slow cookers will produce slightly darker results than what I’m showing here.

If you want easy, definitely give the slow cooker method a try. When you figure out the cooking time required to make it properly with yours, stick with that.

When using these appliances, you will need a can of sweetened condensed milk and water.

Start by combining milk, sugar, and baking soda in a medium-sized saucepan. Use one that is larger than you think you need so that it doesn’t boil over.

Baking soda raises the pH of the liquid (meaning that it becomes less acidic). Food chemists say that this makes the caramelization and Maillard reactions occur more quickly. The baking soda also helps to prevent the milk proteins from coagulating, which makes it easier to produce a caramel-like sauce that is smooth and free from lumps.

Bring to a boil, whisking constantly.

Turn the burner down and cook on a very low heat (just barely boiling) for about two and a half hours.

Stir and scrape the bottom of the pan periodically to make sure it is cooking evenly and not developing lumps.

When it has turned a dark color like you see here, whisk in vanilla extract (optional).

If needed (which likely won’t be the case), use an immersion blender to remove any lumps and to make sure that your sauce is smooth and creamy.

It will thicken more as it cools, but you’ll need to thicken it even more if you want it to be more of a spread than a syrup.

Tip: To thicken stovetop dulce de leche, make a slurry of 1/2 tablespoon cornstarch with 1 1/4 teaspoons milk. Bring it to a very slow boil over medium heat, whisk this slurry into the dulce de leche, and continue to boil slowly for five minutes before removing from heat and cooling.

Smell the silicone ring inside of the Instant Pot lid before you start. If it smells like garlic from some dinner you made, give it a good clean before using it or buy a second one [paid link] and designate it for desserts. You don’t want that garlic smell to permeate your dulce de leche! Now that everything smells fresh, you can begin.

Pour one cup of water into your Instant Pot.

Because of the intense pressure inside of an Instant Pot, never put a can of sweetened condensed milk directly into the Instant Pot.

Place the lid on the Instant Pot, set to sealing, and pressure cook at high pressure for 90 minutes.

When the time is up, do a full natural release and carefully remove the bowl from the Instant Pot while wearing oven mitts.

Blend with an immersion blender until completely smooth. It will thicken up as it cools.

Start by lining your slow cooker bowl with foil. This prevents the slow cooker from getting rusty. I’ve been there and I don’t recommend it.

Peel the label off of a 14 ounce can of sweetened condensed milk, place it in the slow cooker, and submerge it in water. Make sure it is completely submerged with room to spare!

What is dulce de leche?

is a sweet caramel-like sauce that is used in Latin American countries as a spread for toast, a sweetener for coffee, and also as an ingredient or topping for cakes, tarts, and candies. (I like to drizzle it over my banana cookies.)

Cooked just a little, it is a thin syrup that can be used to pour over ice cream or anywhere else you would use caramel. If you cook it down more, it turns into a thick, rich milk preserve that can be spread like jam.

It’s famously used in sandwich cookies called alfajores [paid link], it’s fabulous over any cupcakes (particularly chocolate cupcakes), it makes amazing ice cream, and it is so good in or on top of flan! 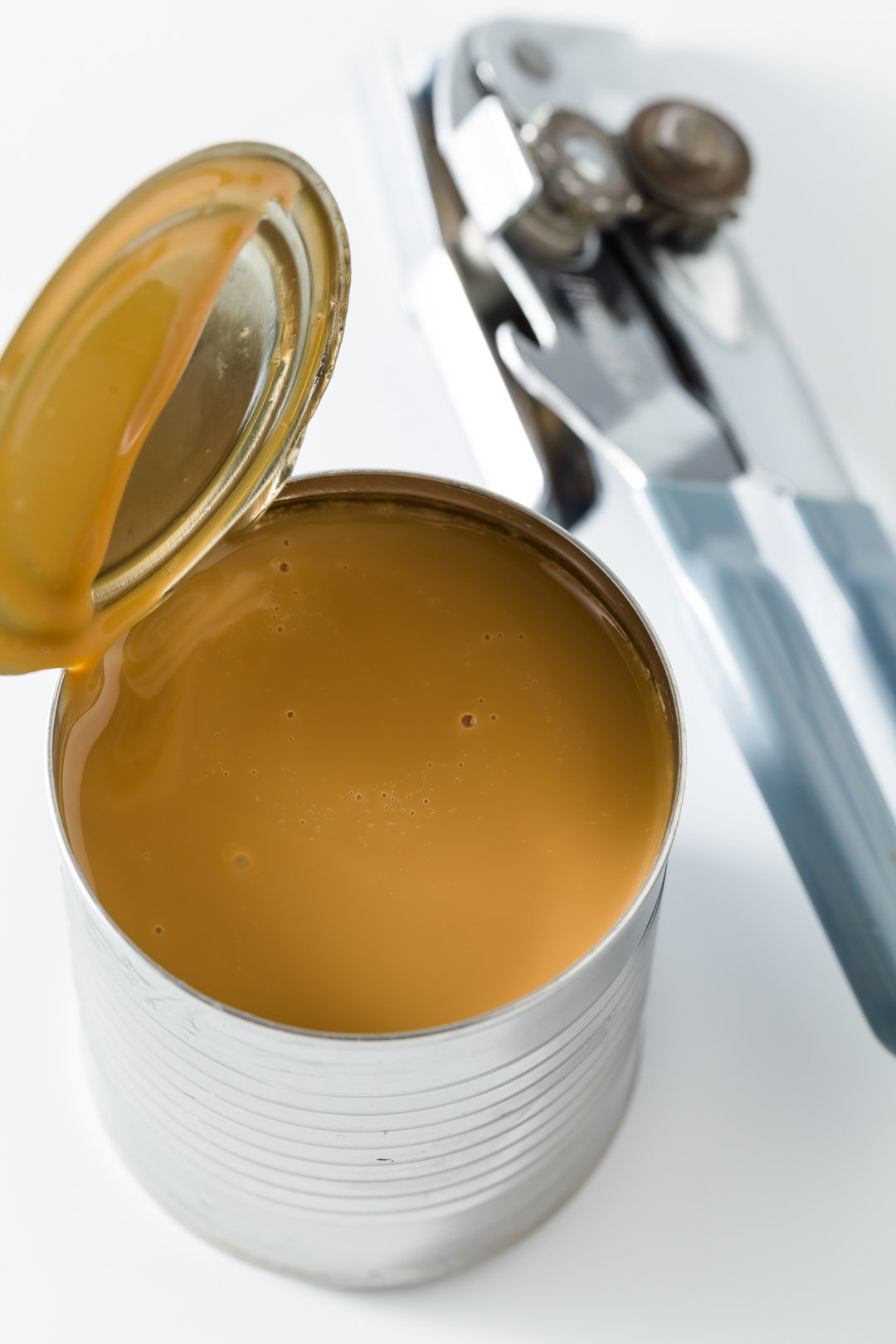 How is it different from caramel?

Caramel is simply sugar that has been heated for a while. Under heat, the sugars break down and re-form into thousands of new little molecules that smell and taste great. Most cooks add water when making caramel to help keep it from burning. When making candies or thicker caramel sauces such as caramel icing, they will add butter, cream, and other ingredients, too.

Dulce de leche has to be made with a combination of milk and sugar. Some of its unique flavors of come from the caramelization of the sugars, but some come from more complicated Maillard reactions between the proteins of the milk and the added sugar.

On the whole, dulce de leche will have a more subtle flavor and smoother mouth feel than caramel.

Will the can of sweetened condensed milk that I used explode after cooking?

No, it won’t explode if you wait until it cools down. Always wait for the can to cool to room temperature before opening!

How do you store dulce de leche?

You can refrigerate it in an airtight container for up to one month. You can also freeze it for several months. 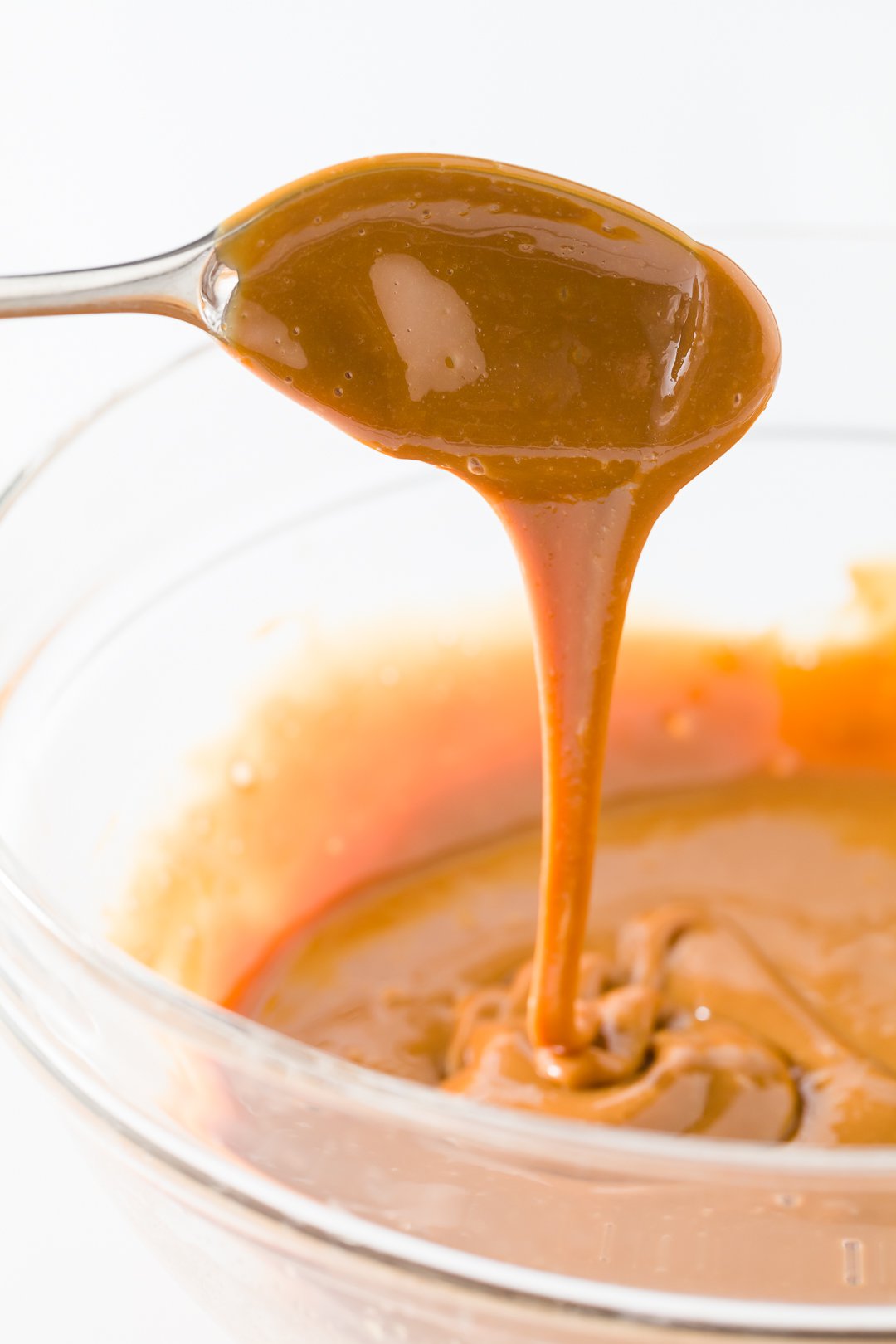