Stef
Cupcake Project
www.cupcakeproject.com
St. Louis, MO USA
Disclosure: I may earn a commission from purchases you make through affiliate links in this post at no additional cost to you.
Pin1K
Share44
Tweet
Yum3
Email
1K Shares
Jump to Recipe Print Recipe

Chiffon cake is a light, airy cake for when you want dessert but don’t want to be bogged down with something heavy. Chiffon boasts both the rich taste and crumbly texture of a yellow cake as well as the lightness and sponge of an angel food cake. This pumpkin chiffon cake recipe is tender and sweet with hints of fall spices! 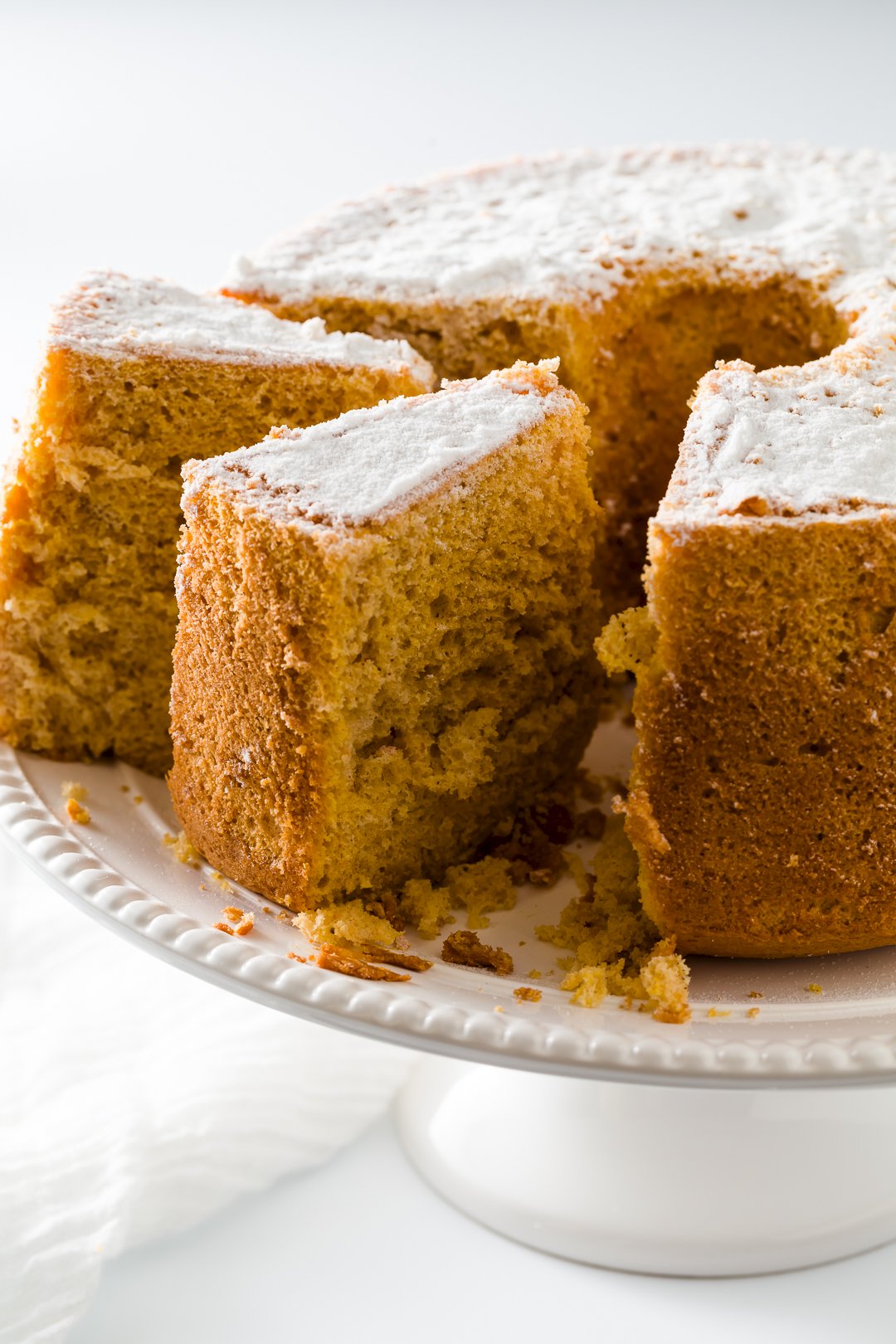 A revolution in baking. A celebration of decadence in the wake of wartime rationing. As mysterious as a film noir starlet and as elegant and insubstantial as a length of luxury fabric. Since its 1927 birth in the oven of Harry Baker, chiffon cake has been anything but ordinary.

What is Chiffon Cake? 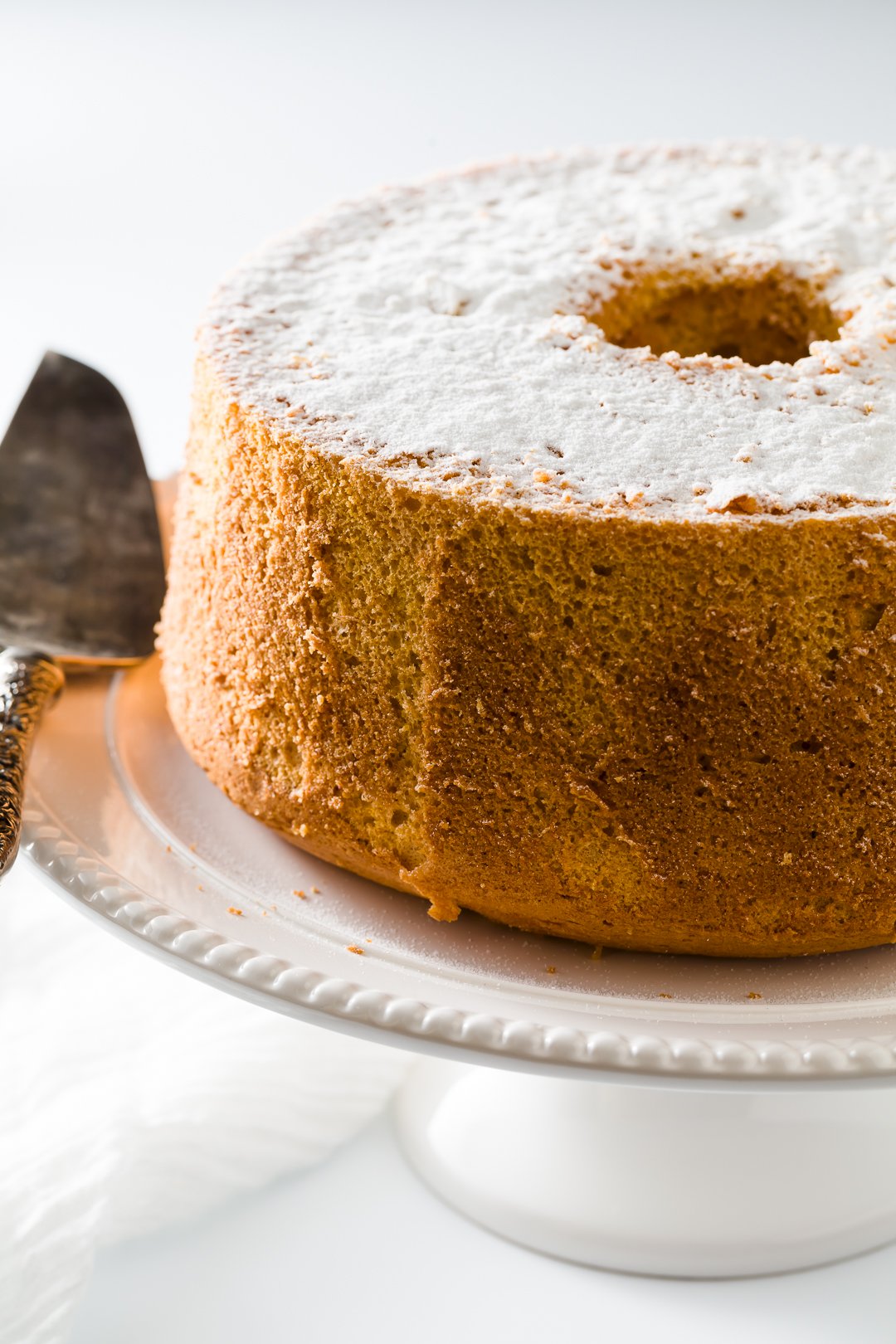 Chiffon cake is a combination of two types of cake:

Chiffon cake is leavened with both baking powder and egg whites, and enriched with vegetable oil in lieu of butter.

What Do You Need to Make Chiffon Cake? 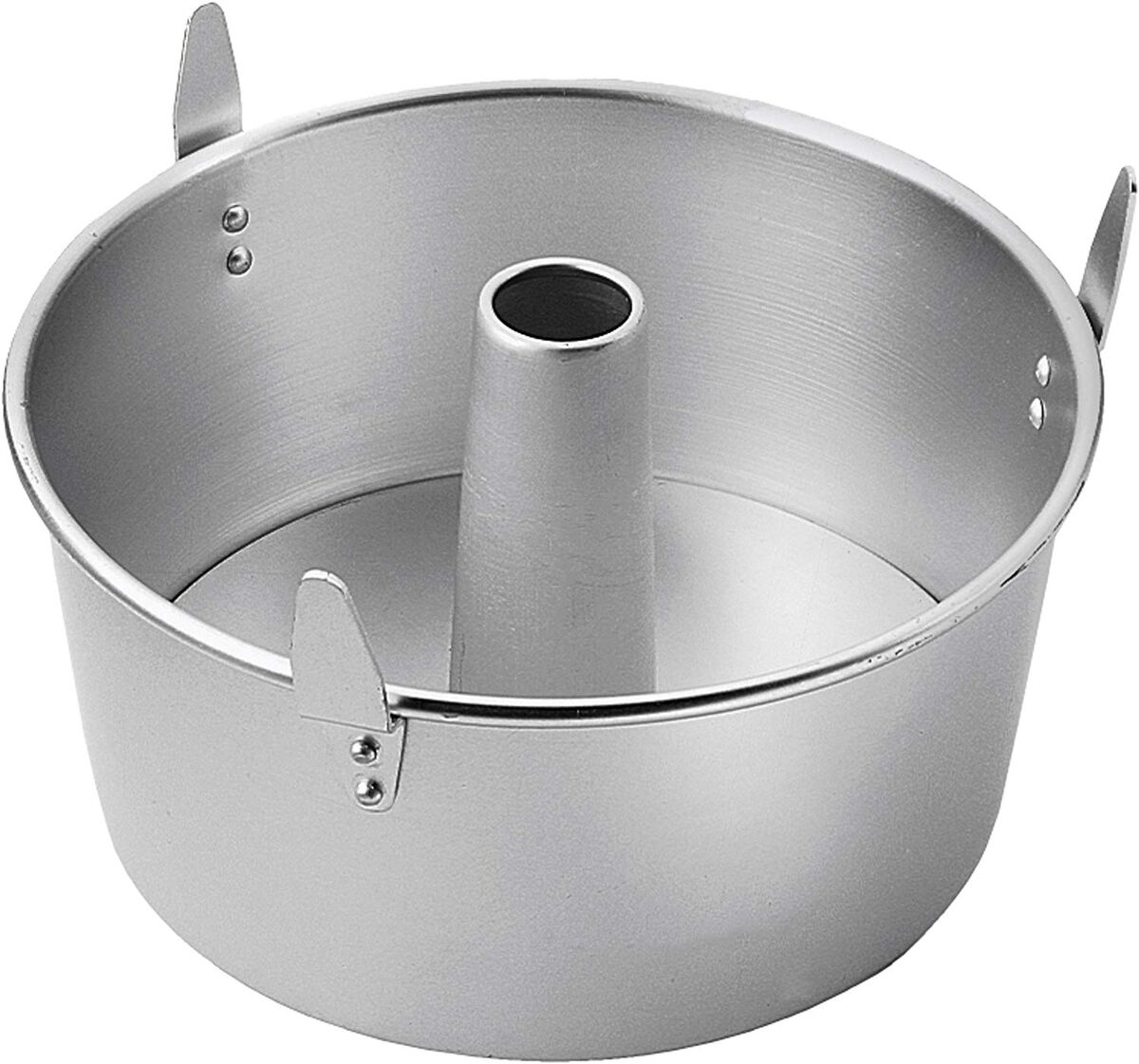 Chiffon bakes low and slow, most often in a tubular angel food cake tin. Make sure the pan isn’t nonstick as you want the batter to stick to the sides as it bakes. This helps the cake to become nice and tall.

However, any straight-sided pan (even a cupcake tin!) will do. You can also use unwaxed liners, just like I do when I make my angel food cupcakes.

How To Make Chiffon Cake

The Basic Formula to Make a Chiffon Cake

While there are countless possibilities when it comes to flavoring and decorating chiffon (think chocolate chiffon cake and raspberry chiffon cake), most recipes follow a basic formula:

Specific Steps to Make This Recipe

To make a pumpkin chiffon cake, follow the following steps:

Sift flour, sugar, baking powder, and spices into a large bowl. Sifting the ingredients helps to keep the cake light. I use the same fall spice blend that I use in apple crumb pie and pumpkin cupcakes, which includes cinnamon, nutmeg, ginger, and allspice. 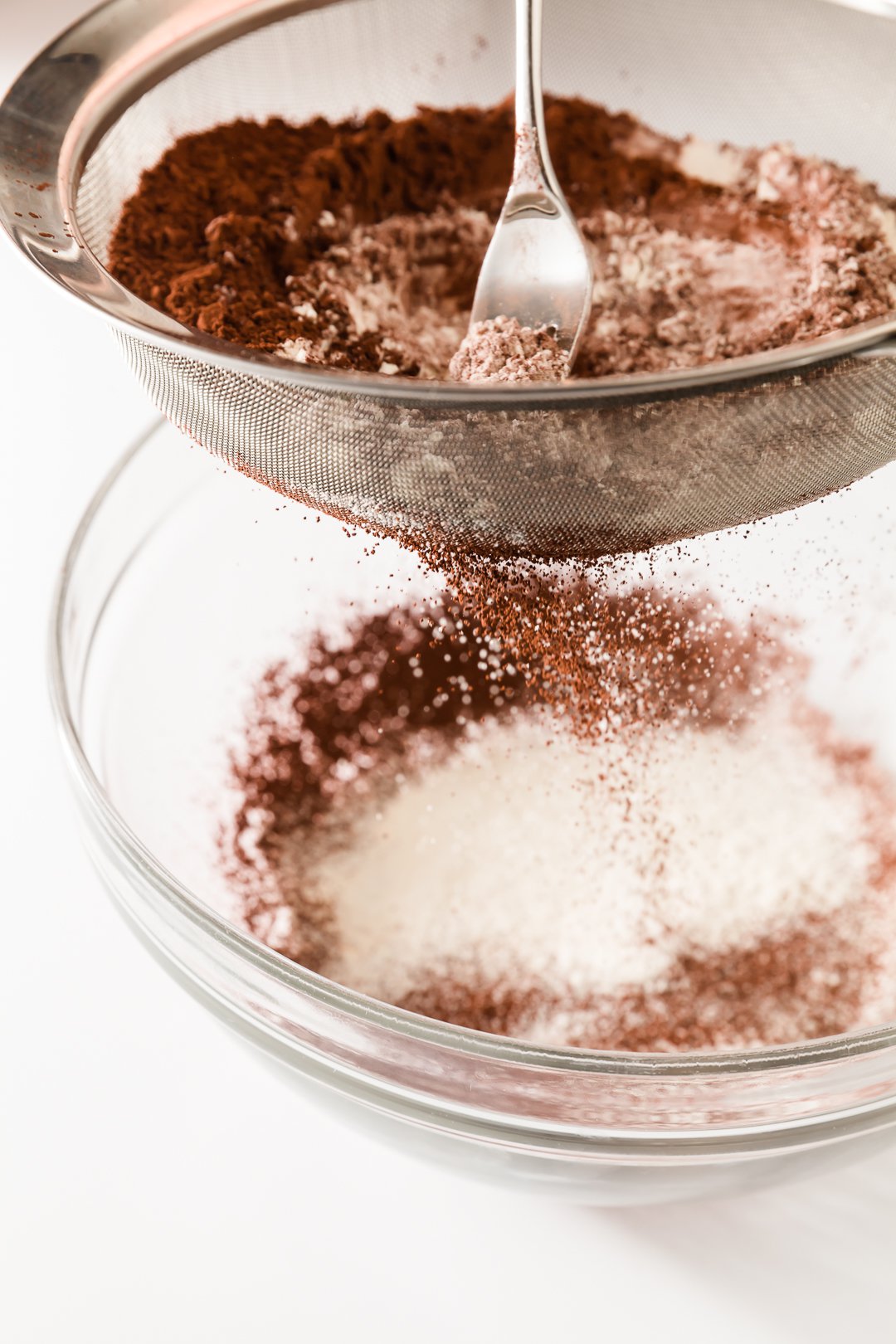 Add oil, egg yolks, pumpkin puree, and vanilla. Be sure to use pumpkin puree, not pumpkin pie mix – the latter has other ingredients that will adversely affect this recipe. (If you make homemade pumpkin puree, don’t forget to save the seeds to make toasted pumpkin seeds!)

Beat with a whisk or using a mixer on low speed until batter is smooth.

In another large bowl, beat egg whites and cream of tartar until the mixture forms soft peaks. A soft peak is a peak that holds its shape for a few seconds when you lift the beater, it isn’t shiny and it collapses back onto itself after a few seconds.

Gradually add sugar into the egg whites, blending until very stiff peaks form. These peaks will be shiny and completely hold their shape. 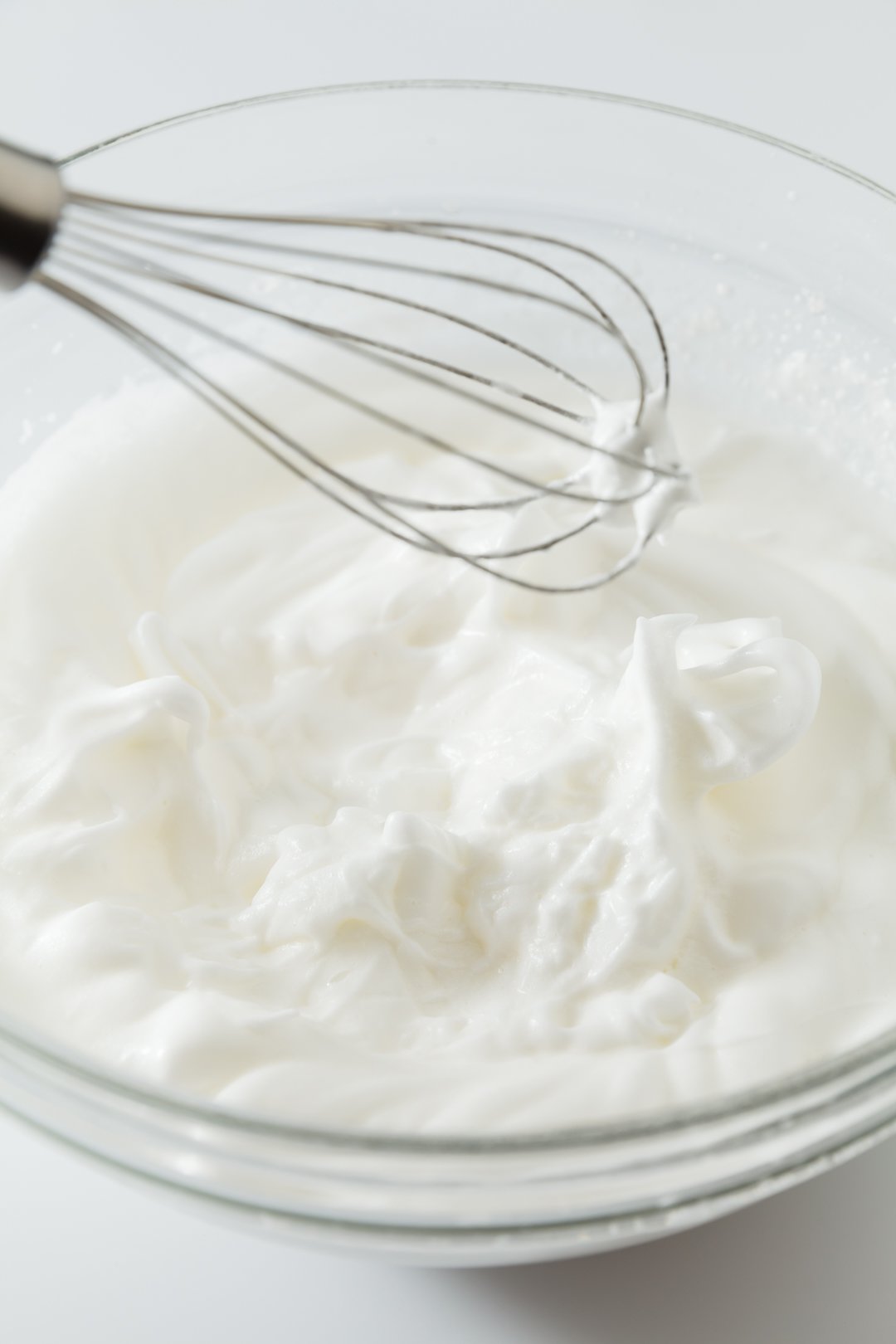 Use a rubber spatula to carefully fold egg whites into the batter. Do it a little at a time. Be sure to be VERY gentle so the egg whites don’t deflate. Never use an electric mixer for this. This will ensure that that sponge ends up light and airy.

Pour the batter into an ungreased angel food cake pan and bake for 50-55 minutes or until a cake tester inserted into the center of the cake comes out clean.

How to Remove a Chiffon Cake From the Pan

To remove the cake from the pan:

How to Serve Chiffon Cake 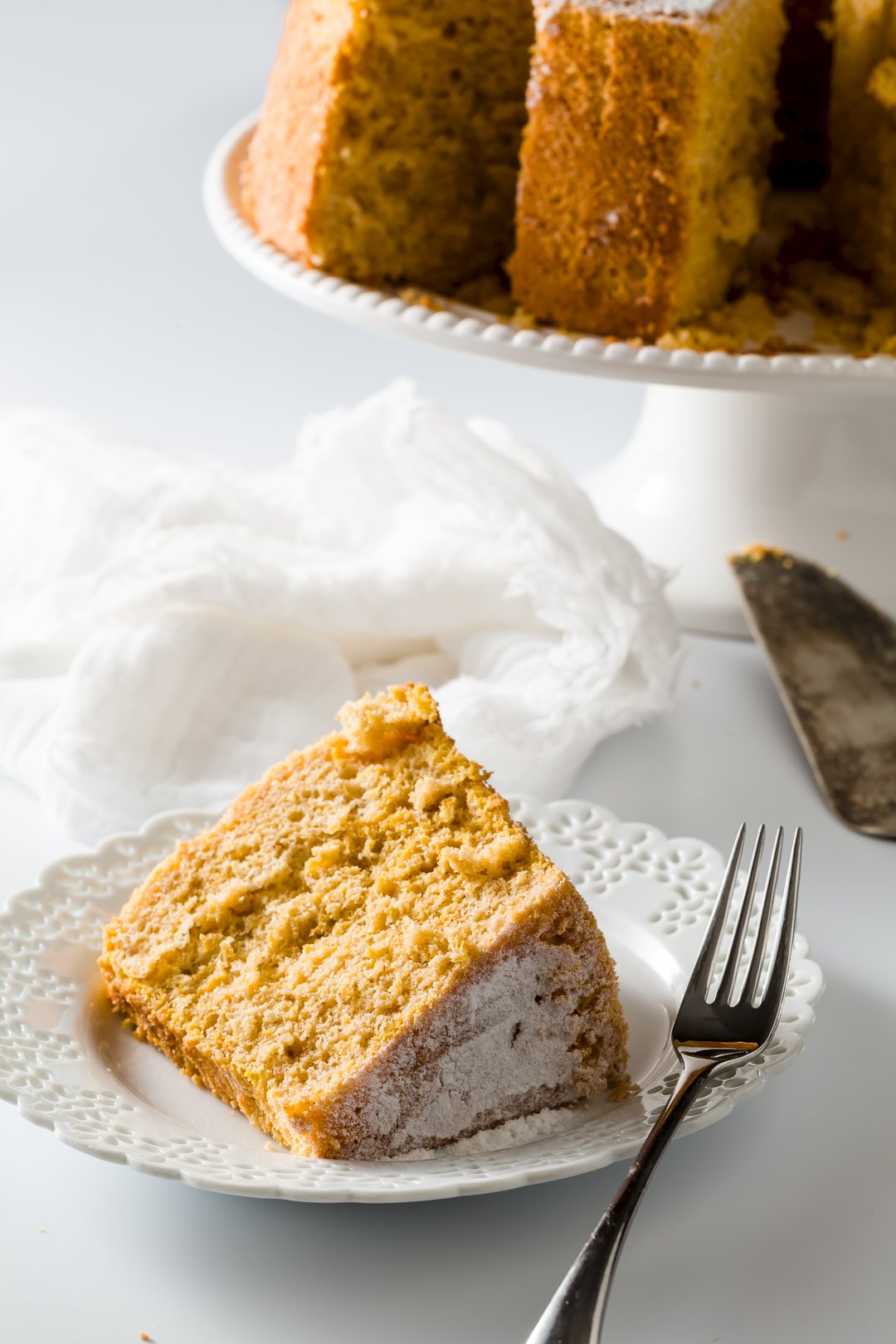 How to Keep a Chiffon Cake from Deflating

As when baking angel food cake, you’ll get the best results with an ungreased pan inverted during cooling to prevent deflation.

Though equal parts butter and foam cake, chiffon takes its name from its lighter side.

The word “chiffon,” derived from the French “chiffe,” meaning “rag,” was applied to the sheer fabric often used to make saris and scarves long before it was ever applied to food.

“Chiffon” first crossed over into the culinary world in the 1920s, when it was used to describe the fluffy, whipped egg white filling of a pie invented by “Pie King” Monroe Boston Strause. (Legend has it that it was Strause’s mother who coined the name chiffon pie, commenting that his meringue-like pie filling looked “just like a pile of chiffon.”) 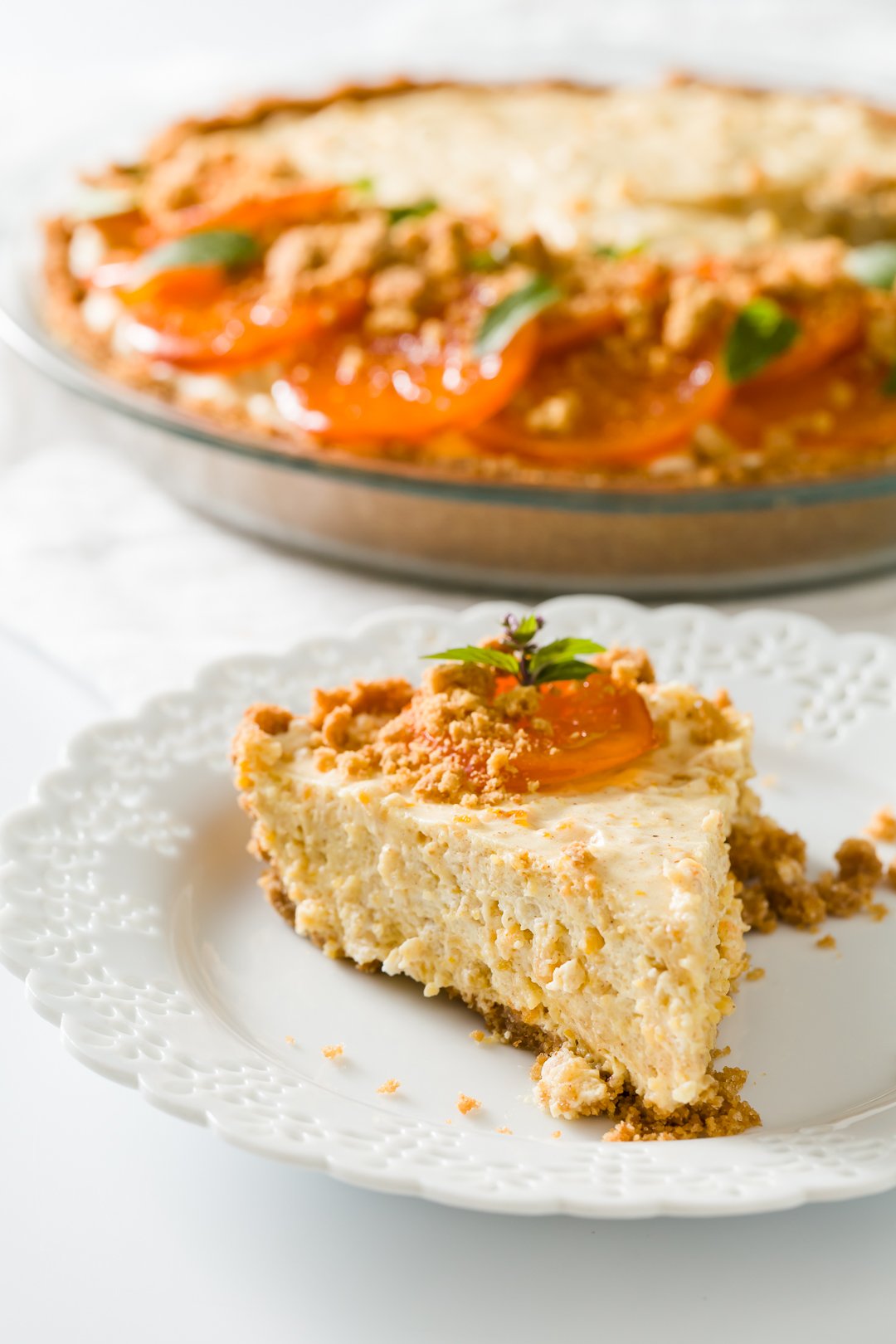 Around the same time that Strause’s new pie came on the scene, Hollywood insurance salesman Henry Baker set out to develop a dessert that combined the best qualities of both butter and foam cakes. In 1927, he succeeded in creating a cake praised for being at once rich, tender, light, and voluminous. 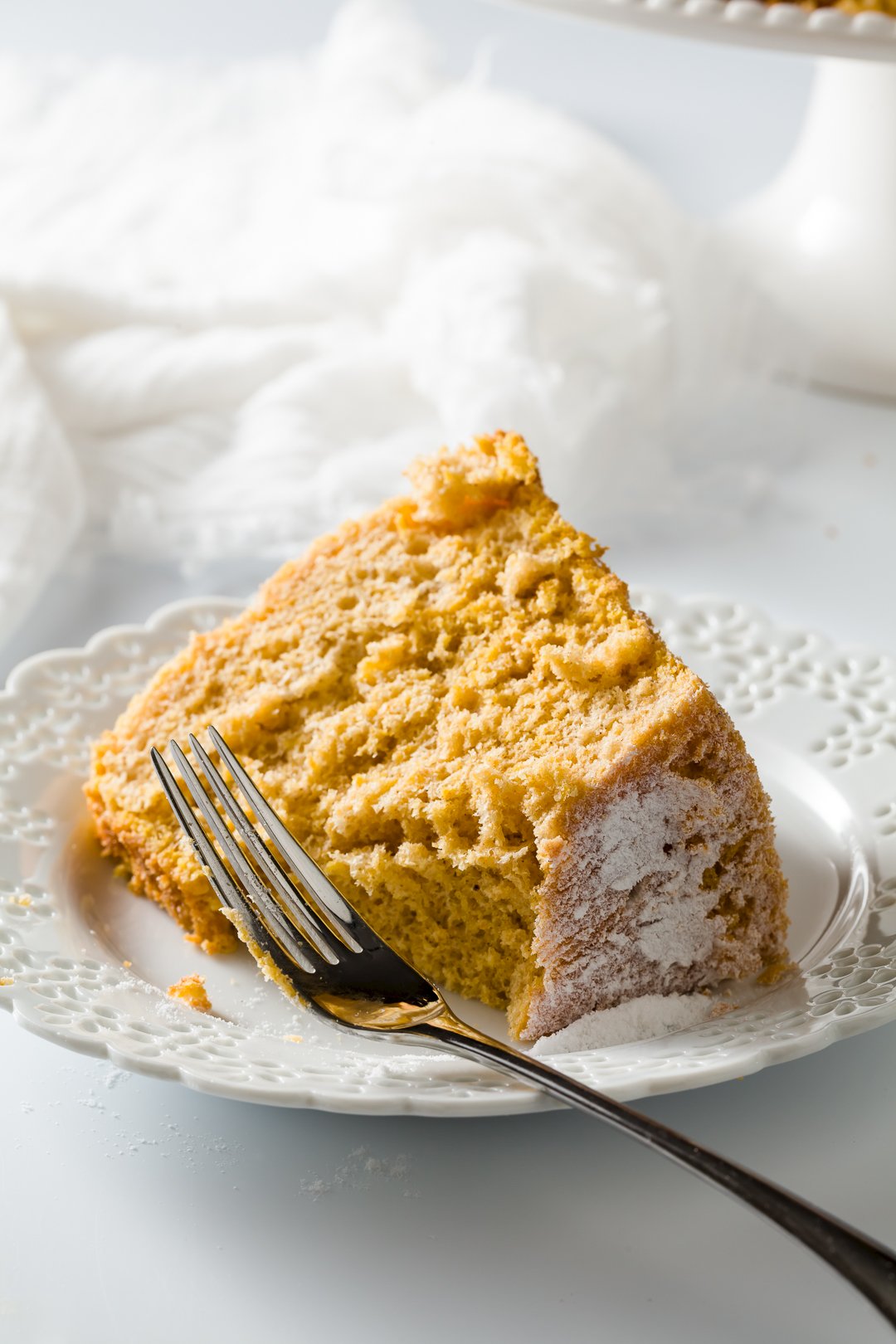 Baker’s skillful marketing of chiffon cake quickly made it a media sensation. He clothed the cake in secrecy, closely guarding the recipe and its “mystery” ingredient. It soon garnered the attention of Hollywood royalty, who sought out Baker’s chiffon cakes for private events.

The cake was given screen time by both MGM and RKO. Then, Baker began to make it for the Brown Derby Restaurant, still keeping the recipe under wraps. The cake became entwined with all the glamour and elegance of old Hollywood.

It was not until the 1940s that the recipe for Baker’s chiffon was published and the “mystery” ingredient – vegetable oil – was revealed.

Again demonstrating his savvy marketing abilities, Baker sold the recipe to General Mills in 1947, just as wartime rationing officially ended. His recipe was approved by Betty Crocker (by then a household name), refined in General Mills’ test kitchen, and printed in 1948 issues of Better Homes and Gardens, Ladies’ Home Journal, and McCall’s. From there, the cake, filled with once-rationed ingredients, enjoyed a period of popularity that stretched well into the 1960s.

You'll get the best results with an ungreased pan inverted during cooling to prevent deflation. This cake can also be made in muffin tins. Check for doneness at 20 minutes.

Jess Touchette is a special collections librarian living in St. Louis, Missouri. A food history enthusiast and an amateur baker, she enjoys poring over centuries-old recipes and attempting to bring them new life in a modern kitchen.
Love it? Share it!
Pin1K
Share44
Tweet
Yum3
Email
1K Shares