Flavored like black licorice and decorated with spiders made from licorice and gumdrops, my Halloween cupcakes are perfect for the holiday! Enlist kids of all ages to have fun while helping you to decorate them.

As I mentioned above, I flavor this recipe like black licorice to go along with the candy theme of the decorations. It’s a unique flavor profile that will make these treats extra special.

Black licorice is a love it or hate it kind of flavor. But, I’ve found that even those who don’t love black licorice enjoy these cupcakes. The flavor isn’t as poignant as it is in the candy.

To get as close as possible to the taste of black licorice, I looked up a recipe for homemade black licorice and used the same ingredients in my recipe: blackstrap molasses and anise.

Blackstrap molasses is the darkest kind of molasses. It has a very different flavor from the light molasses that you would use in molasses cookies.

Tip: If you can’t find blackstrap molasses, look for a molasses labeled dark.

For the anise flavor, I use ground anise (also called aniseed). You can either buy anise already ground or purchase whole anise and grind it in a coffee or spice grinder or by using a mortal and pestle.

Note: Anise is not the same as star anise, so don’t buy the latter for this recipe.

Aside from pantry staples, you will also need a can of sweetened condensed milk.

Candy is required to decorate these cupcakes for Halloween:

Start by mixing all of the dry ingredients together – cake flour, baking powder, baking soda, salt, and ground anise.

Mix in the sugar, molasses, and butter. Be sure to mix for a few minutes to make sure that all of the ingredients are fully incorporated.

Mix in the eggs, vegetable oil, and sweetened condensed milk.

Add milk to thin out the batter. Mix until just combined.

Fill cupcake liners 2/3 full and bake at 350 F for 20 minutes. You’ll know that the cupcakes are done when a toothpick inserted into the center of a cupcake comes out clean.

Place on a cooling rack or out on the counter to cool completely before frosting.

Like the cupcakes, the frosting uses ground anise. If you don’t like the look of the anise in the frosting, you can use 1 1/2 teaspoons of anise extract [paid link] instead.

A pretty star-shaped swirl will get in the way of the candy spiders that sit on top. Either spread the frosting on the cooled cupcakes with a spatula or pipe it on with a round tip.

This concept was inspired by Land O’ Lakes’s spooky spider cupcakes. I fell in love with the idea!

Each cupcake uses two gumdrops. Use the first gumdrop as the spider’s body. Cut the second gumdrop in half for the spider’s head. You can easily cut gumdrops in half with a knife or kitchen shears.

Tip: It’s fun to experiment with different color gumdrops. Since they usually come in multi-color bags, embrace all of the colors!

It’s easiest to find licorice laces in red and black. Either color will work great for your spiders. Cut the licorice into eight pieces per spider and arrange the pieces on top of the frosting so they touch the spider’s body and dangle off the edge of a cupcake.

Place two small black dots on the spider’s head for the eyes. Squeeze the black decorating gel just enough for some to come out, then just touch the gumdrop with the tip without squeezing to make the eyes.

Be very careful not to squeeze the decorating gel or it will drip all over.

I love making these as minis! You can still decorate them as spiders – simply cut everything much smaller – or you can place small pieces of licorice on top of the cupcakes for a different look.

When you make mini cupcakes, start checking for doneness at 15 minutes. I recommend that you read my post all about mini cupcakes to learn more.

How can I find ground anise for these cupcakes?

The easiest way to get ground anise is to make it yourself. Buy anise – not star anise – and use a spice grinder or mortar and pestle to grind it into a powder.

Why do you use blackstrap molasses?

Blackstrap molasses has a complex, rich, dark flavor. It’s more bitter than other types of molasses, too, and works well when combined with sweetened condensed milk.

Which spices can I use if I don’t like anise?

I recommend you switch out the cupcake and frosting entirely and stick with the spider decorations. Try my pumpkin cupcakes frosted with cinnamon cream cheese frosting. 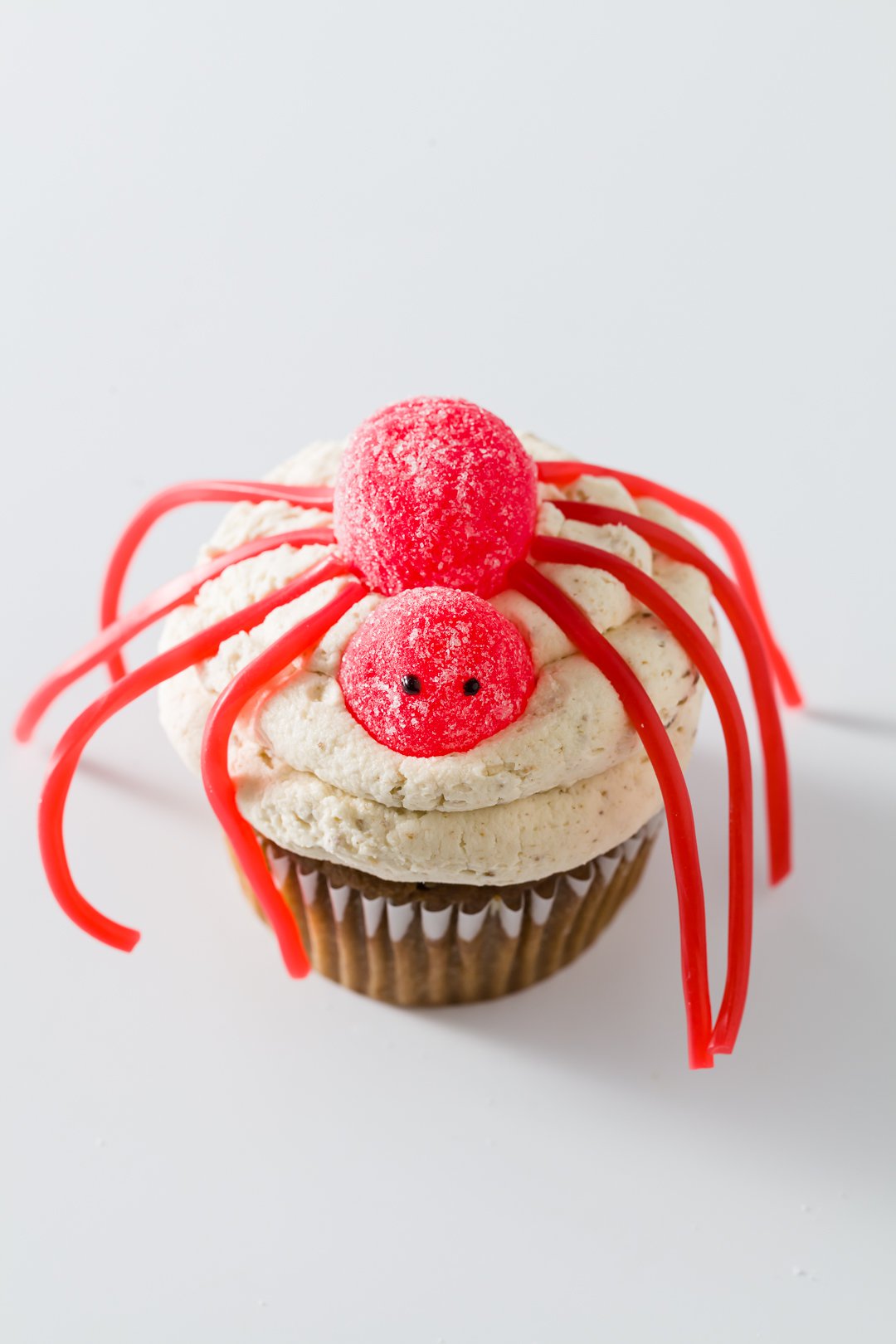 Anise is typically sold in the grocery store as seeds. Use a spice grinder, coffee grinder, or mortar and pestle to grind it. Anise is not the same as star anise, so don’t buy that for this recipe. If you don’t like the look of the anise in the frosting, you can use 1 1/2 teaspoons of anise extract [paid link] instead. Experiment with different color gumdrops and lace licorice.