Homemade maraschino cherries are easy to make, so tasty, and much better for you than store-bought ones. Use them to top ice cream sundaes, cupcakes, or as the perfect cocktail cherries!

When most people think of maraschino cherries, they think of the store-bought version [paid link] – dyed-red cherries that are super sweet from soaking in a sugar syrup. However, they can be easily made at home by steeping fresh cherries in either alcohol or juice.

My alcohol-free version is made by steeping pitted cherries in pomegranate juice and loads of spices. The cherries are tart, sweet, surprisingly complex, and incredibly inviting.

They’re used in many ways:

If you want to be really technical about it, this recipe should be made with Marasca cherries. It’s the cherry variety that was traditionally used and it’s the one used to create maraschino liqueur.

However, most of us don’t have access to that type of cherry, and really, any cherry will do. When selecting cherries:

I typically use Rainier cherries.

Tip: The cherries must be pitted. If you don’t own a cherry pitter, you will definitely want to invest in one. I like the pitters that can pit a bunch of cherries at a time [paid link].

The other special ingredient you’ll need is pomegranate juice. My recipe was adapted from a recipe that I found in a NPR story by Kara Newman, sourced from Raising the Bar by Nick Mautone [paid link]. While that one calls for grape juice, I switched it to use pomegranate juice for my version.

Start by pitting your cherries (see the tip above for a helpful hint) and set them aside.

Bring to a boil, then reduce to a simmer and stir until the sugar is completely dissolved.

Add in the pitted cherries and let simmer for 10 minutes or until the juice has taken on some cherry flavor. (You’ll have to taste it to check.)

Once done, remove from heat, transfer the cherries and juice to a jar to cool, then cover with a tight-fitting lid and refrigerate for three days before using.

The way that these cherries were traditionally made (and the way I make them) differs from both the process used to make store-bought maraschino cherries as well as the more modern, kid-friendly way of making them.

Traditionally, Croatian locals preserved Marasca cherries by pickling them and storing them in a liqueur also made from these cherries. These came to be known as maraschino cherries.

The modern, homemade version is frequently called Luxardo cherries. These are made by boiling fresh sweet cherries with maraschino liqueur, a clear, relatively dry liqueur made from these sour Marasca cherries.

Luxardo cherries taste like tiny shots of liqueur encased in a piece of fruit. They are most definitely not kid-friendly.

At the processing center, the cherries are bleached in a solution of calcium chloride and sulfur dioxide until they turn yellow. Next, they’re marinated in huge vats of high fructose corn syrup and Red #4.

Of course, this varies by brand. There are plenty of quality store-bought options. For example, Tillen Farms [paid link] makes one that is free from dyes, corn syrup, artificial colors, and flavors. I suggest reading the ingredients before you make a purchase of any store-bought maraschinos.

Which type of cherry should I use for this recipe?

Though the traditional recipe uses Marasca cherries, any fresh variety of red cherry with a long stem will work well. I use Rainier cherries.

How long can I store these cherries for?

These cherries, as well as my Luxardo cherries, get better with time; while you can eat them right away, the flavored syrup will seep into the cherries over time. I recommend waiting three days after making them before eating them and then storing them for up to a few weeks in the refrigerator. 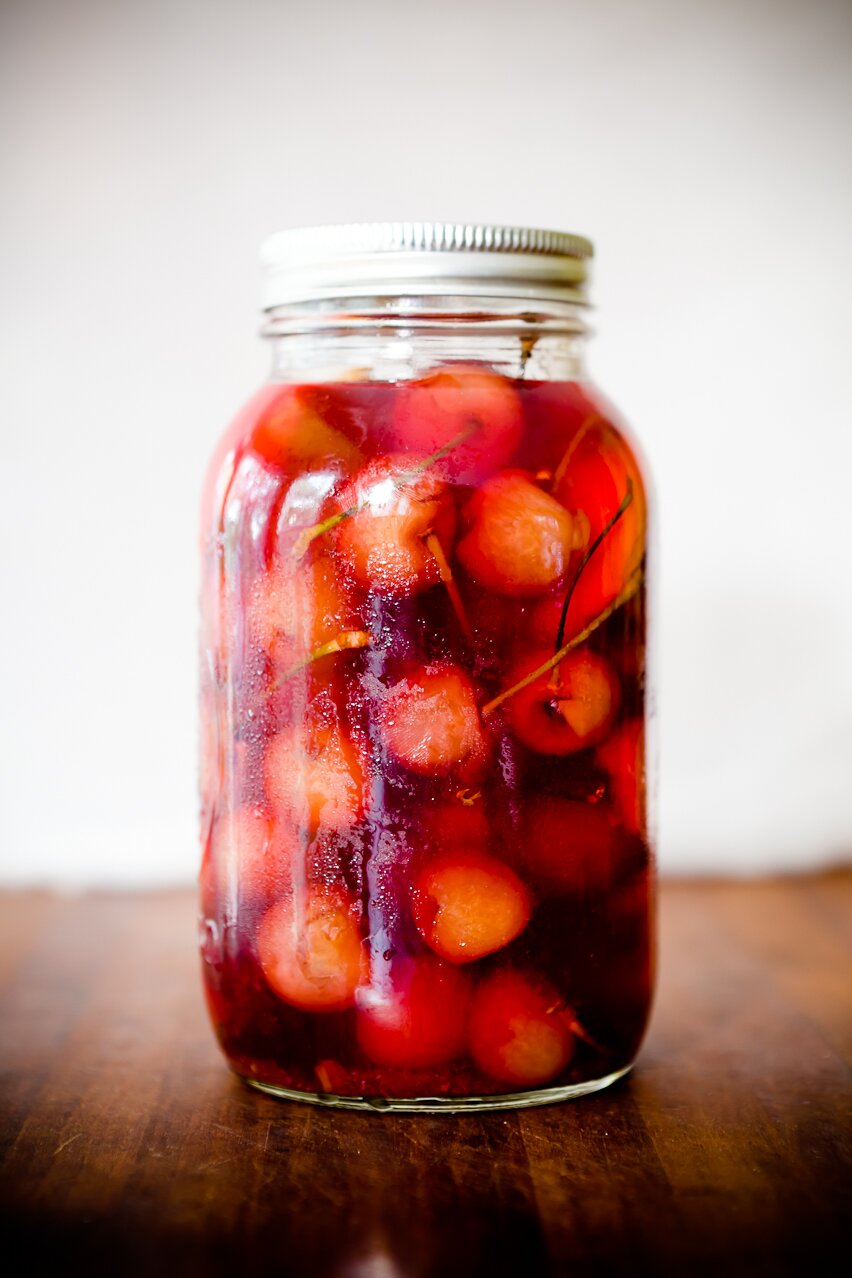 The recipe above is for the kid-friendly cherries. Follow the instructions in my post on Luxardo cherries if you are interested in making the alcoholic version.