My cinnamon chip scones are buttery, rich, and heavily spiced. They have an irresistible crunchy cinnamon sugar topping and cinnamon chips throughout!

They make a great breakfast with a cup of coffee, but they are also perfect for dessert. The flavor reminds me a lot of the cinnamon crunch bagel at Panera.

This recipe uses mostly baking basics like flour, sugar, butter, eggs, and cinnamon. The only unique ingredient you’ll need is cinnamon chips. You could leave the chips off and these scones would still be great, but adding them gives you fun bursts of cinnamon sugar flavor throughout your bite.

Depending on where you live, you may be able to find cinnamon chips in the grocery. If you can’t locate them, you can buy them online [paid link] or make them yourself.

I use coarse kosher salt rather than table salt in the recipe. It gives you pops of salty flavor which work really well. If you don’t have kosher salt on hand, substitute with 1/4 teaspoon of table salt.

To make the scones, preheat your oven to 400F and whisk together the dry ingredients – flour, sugar, baking powder, salt, and cinnamon.

Next, cut cold butter into small pieces and add it to the bowl. Mix with your hands until the butter looks pea-sized.

Tip: It is very important that you use cold butter. Warm butter will integrate into the batter too much. The little pieces of butter make the scones flaky.

In a separate bowl, whisk together the wet ingredients – eggs, sour cream, and vanilla extract.

Next, slowly mix the wet mixture into the dry mixture until just combined – it will be lumpy.

Use your hands to gently fold in the cinnamon chips.

Spread the dough out on a parchment-lined cookie sheet in a thick circle and sprinkle with a mixture made of sugar, cinnamon, and a touch of heavy cream. The heavy cream helps the topping stick to the scones.

Use a knife or a bench scraper to cut the dough into 8 wedges.

Bake for 20 minutes or until the sides are slightly browned.

You can eat scones all on their own, or you can slice them open and serve with clotted cream or homemade butter for extra decadence.

For a twist, you could also bake these scones with a crumb topping instead of the cinnamon sugar topping.

How long do these last?

Can I use a scone pan for this recipe?

Yes! Using a scone pan [paid link] ensures that the scones are evenly sized. It also gives them straighter edges. Simply grease the pan and divide the dough evenly between each section. A scone pan can also come in handy as a cornbread pan. 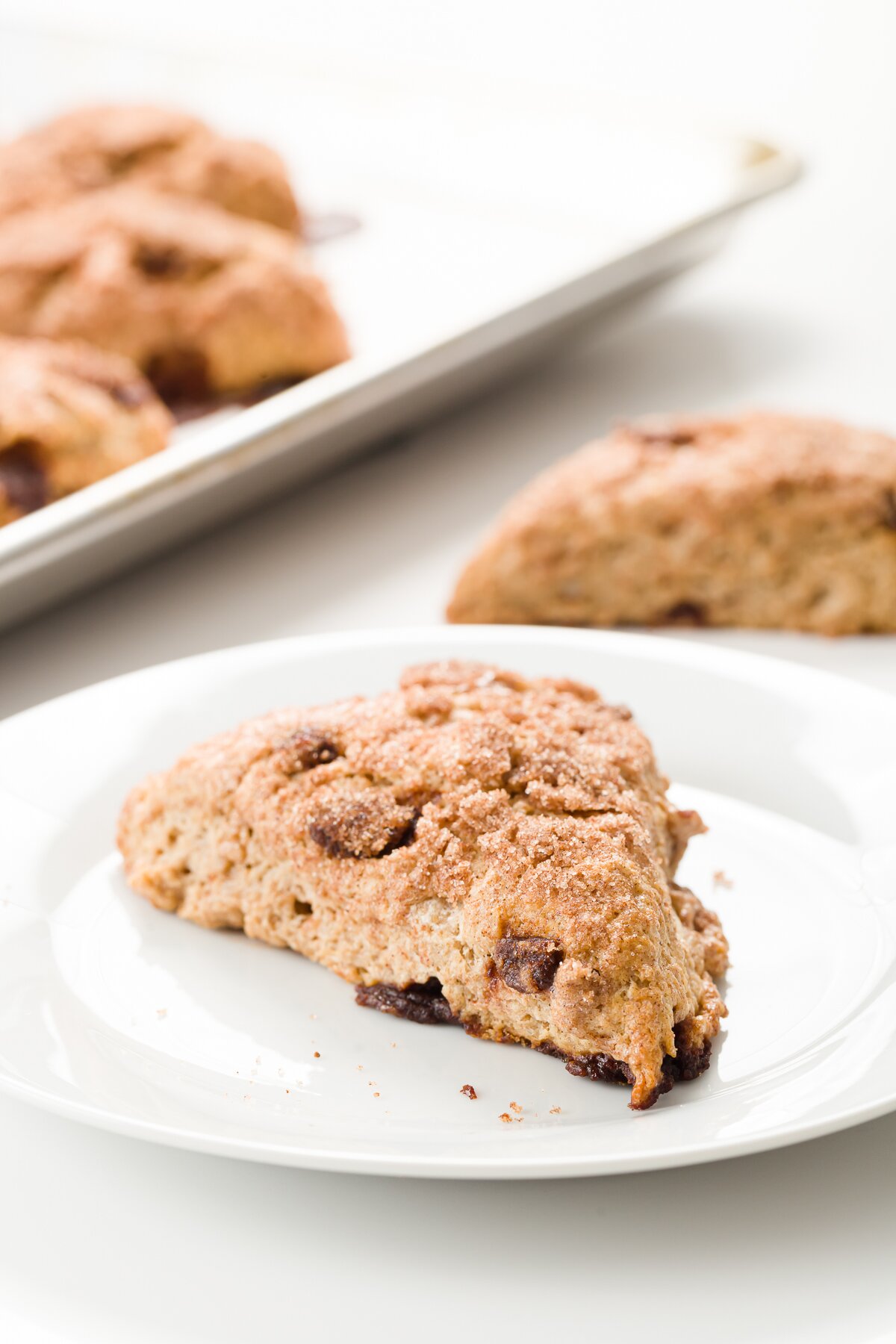 These scones are best on the day you make them. But, they will last for a few days at room temperature in an airtight container.  They will also last for months in the freezer.