The recipe is similar to my apple cupcakes, but without the apples – the cinnamon and brown sugar give them a bit of a fall cupcake flavor.

Aside from the usual pantry staples, you’ll also need Biscoff spread [paid link] (shown above) to make these cupcakes.

You can use light brown sugar like I do, or, for a more intense flavor, try using dark brown sugar. Either way, be sure to pack the brown sugar tightly in the measuring cup for the most accurate measurement.

Tip: If you are new to to making cupcakes, read my cupcake baking tips before getting started with the recipe.

Start by preheating your oven to 350 F.

Next, mix in the dry ingredients a little bit at a time until just combined. (Read my post about over-mixing cupcakes to see why mixing properly is important.)

Divide batter evenly among 12 cupcake liners, which should be filled almost all the way.

Bake for about 25 minutes or until a toothpick comes out clean. Let cool to room temperature on a cooling rack before frosting them.

Tip: Biscoff spread is very dense, so I lighten it up by using it in a meringue buttercream. Meringue buttercreams are frostings made with whipped egg whites – making them very light and fluffy – examples include Italian buttercream and marshmallow frosting. (Read my post on cupcake frostings to learn more about what makes this type of frosting unique.)

Start by setting a heat-proof bowl over a pot full of simmering water. Add egg whites, brown sugar, and salt.

Whisk constantly until the sugar is completely dissolved and the mixture reaches 160 F according to a candy thermometer.

Remove the mixing bowl from the heat and use an electric mixer to whisk the contents at medium speed for 10 minutes. Then, switch to high speed and beat for another 6 minutes or until the mixture is cool and fluffy.

Switch to the paddle attachment and mix on medium-low speed while adding cookie spread a little at a time.

Add the butter several tablespoons at a time, beating well at medium-low speed after each addition.

Tip: If the frosting appears to separate after the butter has been added, beat on medium-high until smooth again, 3-5 minutes more.

Pipe onto cooled cupcakes and enjoy!

My frosting fell apart – what happened?

It’s likely that your ingredients were too hot. You can try to fix this by refrigerating the mixing bowl for a few minutes, then mixing a lot more. Don’t give up; if you keep mixing, it should eventually come together.

How do I store leftover frosting?

Store leftover frosting in the fridge for up to one week or freeze it for several months. Always bring it to room temperature and beat it for a few minutes before using.

Do I need to refrigerate these cupcakes after I’ve frosted them?

No, they should be fine at room temperature for several days. 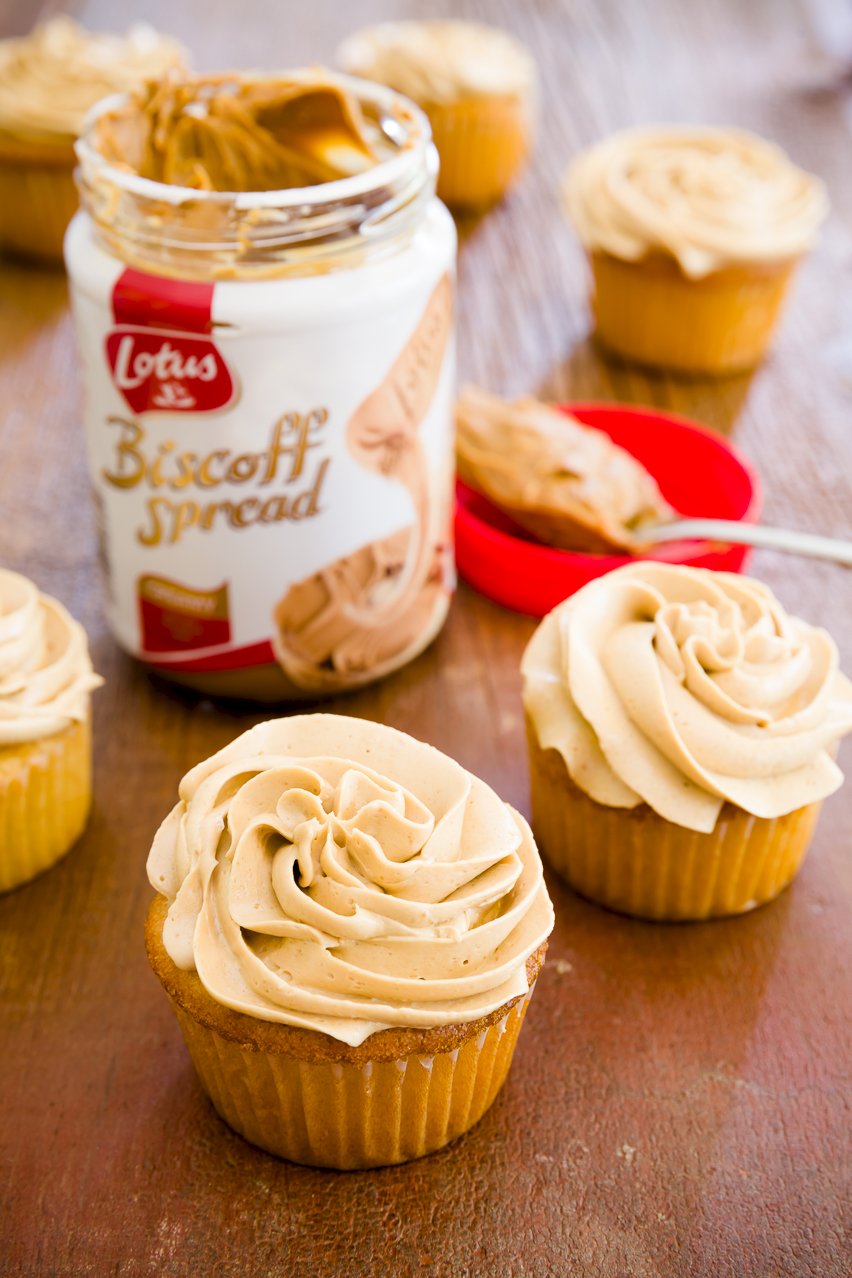