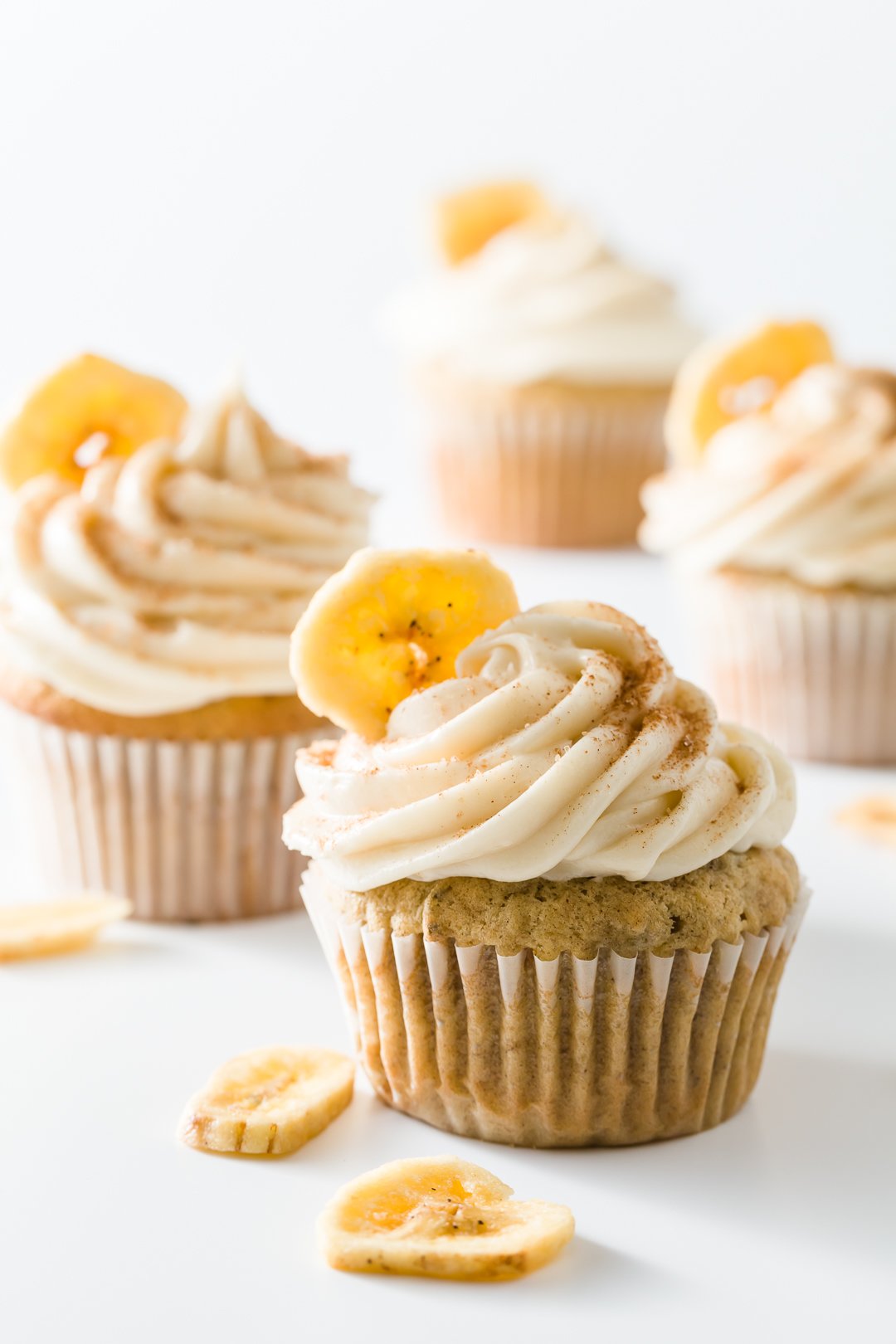 Grandma makes her banana cupcakes with vanilla as the only spice, but when my son Myles and I make them, we like to add a slew of spices to the recipe.

Spices or no spices, this recipe is top banana!

What’s the Difference Between a Banana Cupcake and a Banana Muffin? 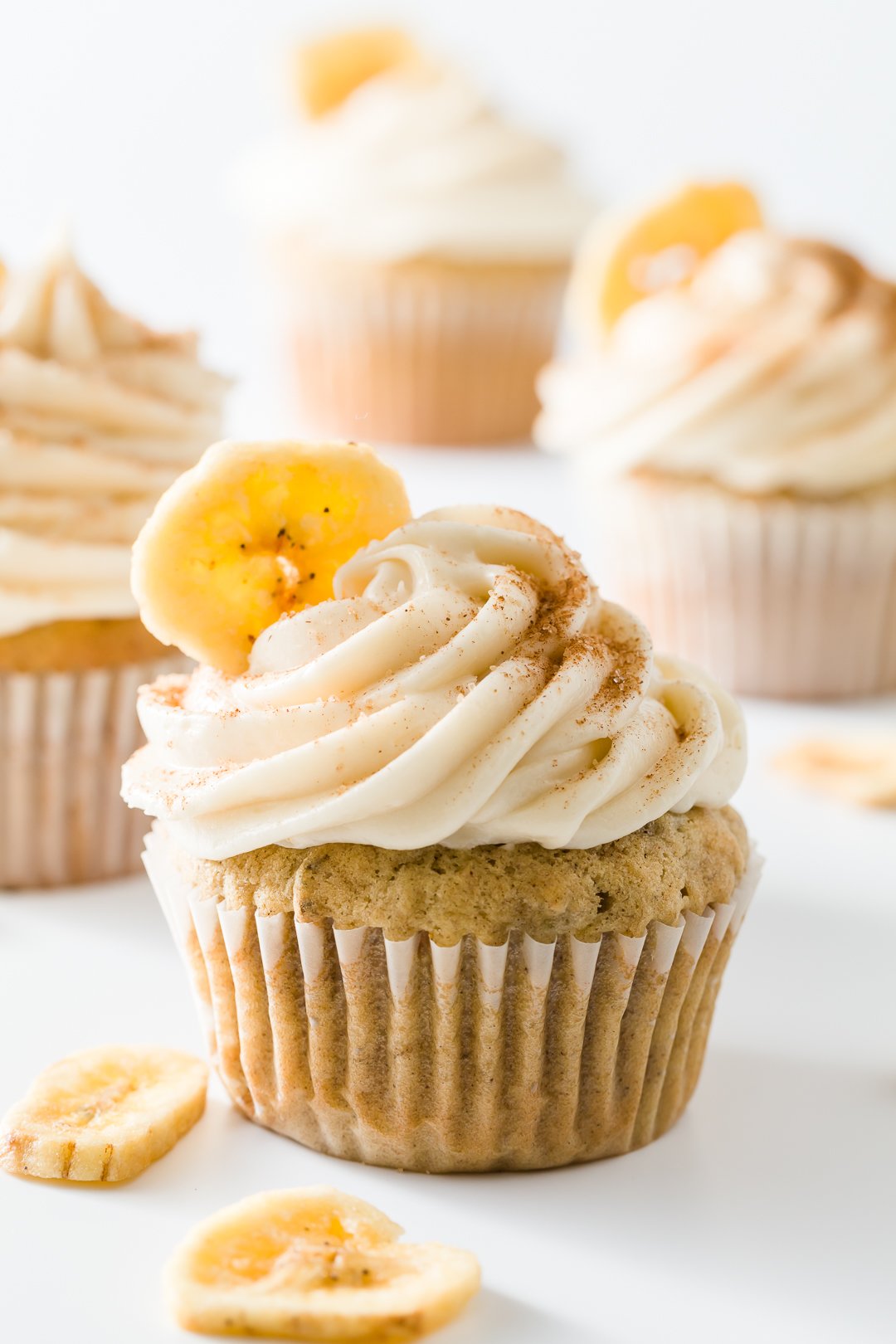 My banana cupcakes are much lighter than what you would expect from banana muffins. But, they still have a strong banana flavor.

Also, banana muffins aren’t frosted and my banana cupcakes have a heaping swirl of a vanilla cream cheese frosting!

What If I Don’t Have Ripe Bananas? 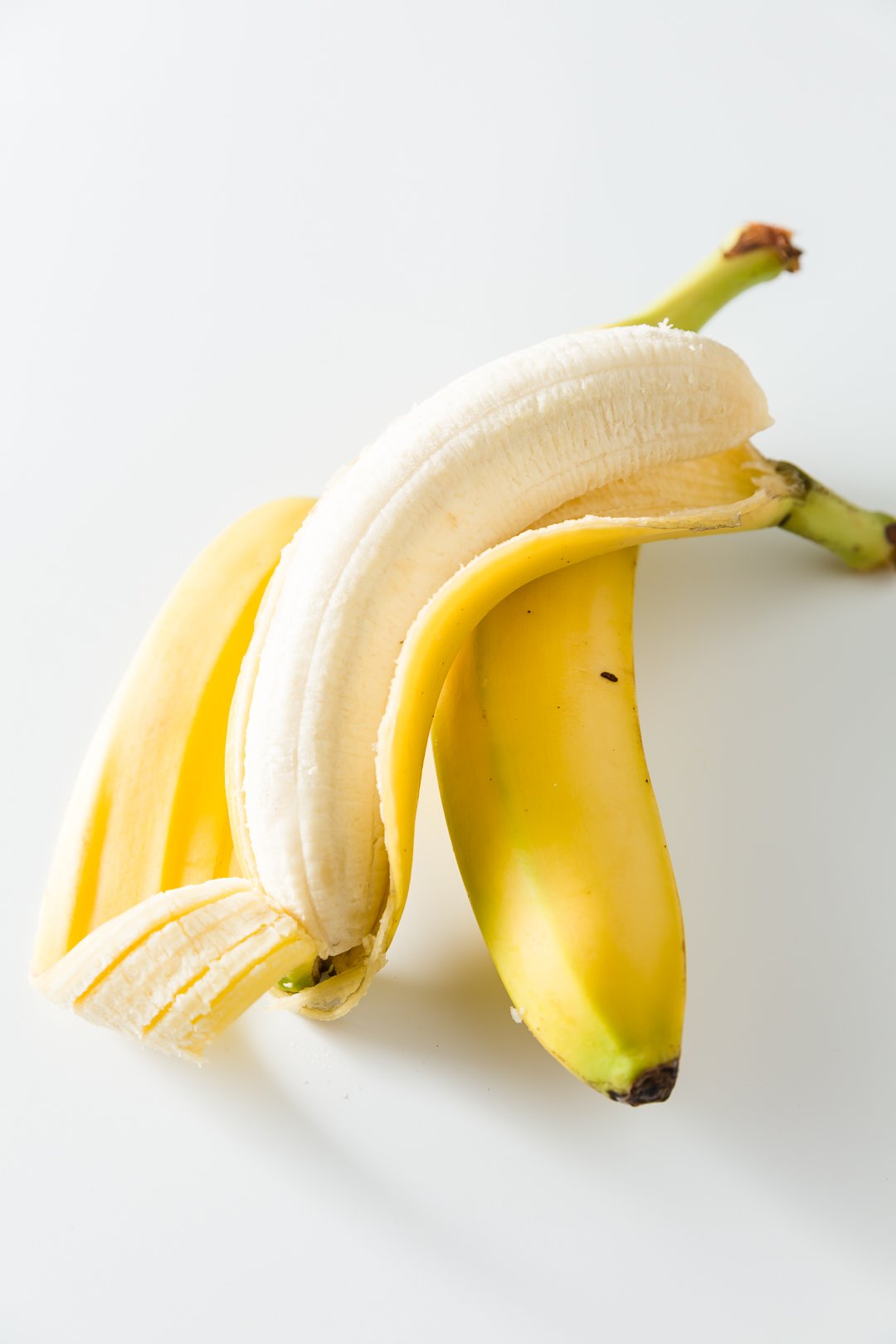 Banana cupcakes are best with super ripe – almost black – bananas. If you don’t have any ripe bananas around, you can peel your bananas and microwave them until they they get super soft, almost liquidy (this typically takes about 45 seconds). This will make them nice and sweet.

If your bananas aren’t super ripe yet and you want to make something special with them, I suggest making caramelized bananas and using them to make Bananas Foster French toast.

Which Spices to Use in Banana Cupcakes 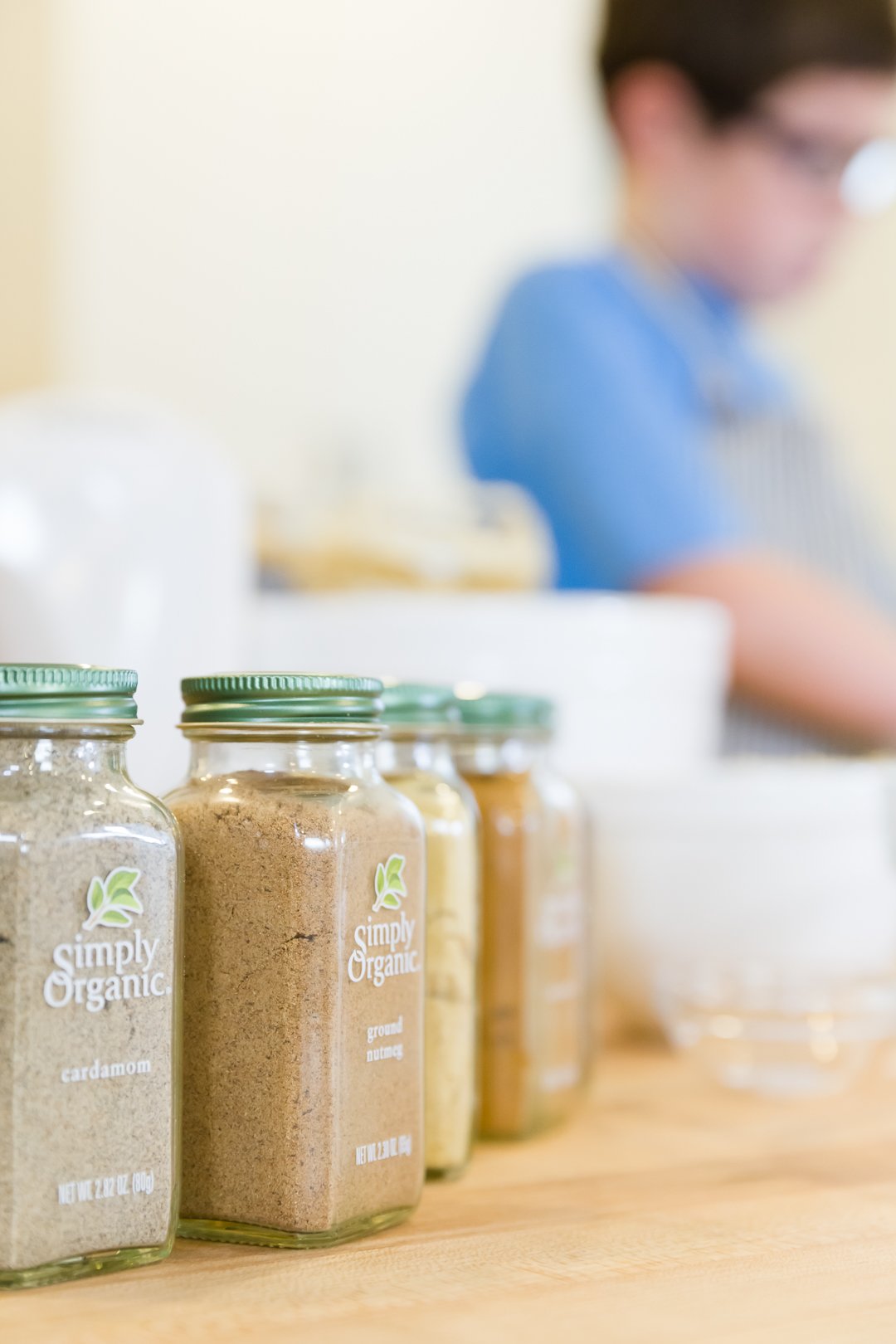 Myles and I like to put cinnamon, ginger, allspice, nutmeg, and cardamom in our banana cupcakes.

If you don’t like any of these spices, simply leave them off. But, we highly recommend you try them!

Can I Make These Cupcakes as a Cake?

Yes, you can make these cupcakes as a cake! Put the batter into a greased 8″ x 8″ square baking dish and increase the baking time to about 30 minutes, testing for doneness starting at 20 minutes.

Double the frosting recipe if you like large swirls.

A Family That Loves Bananas 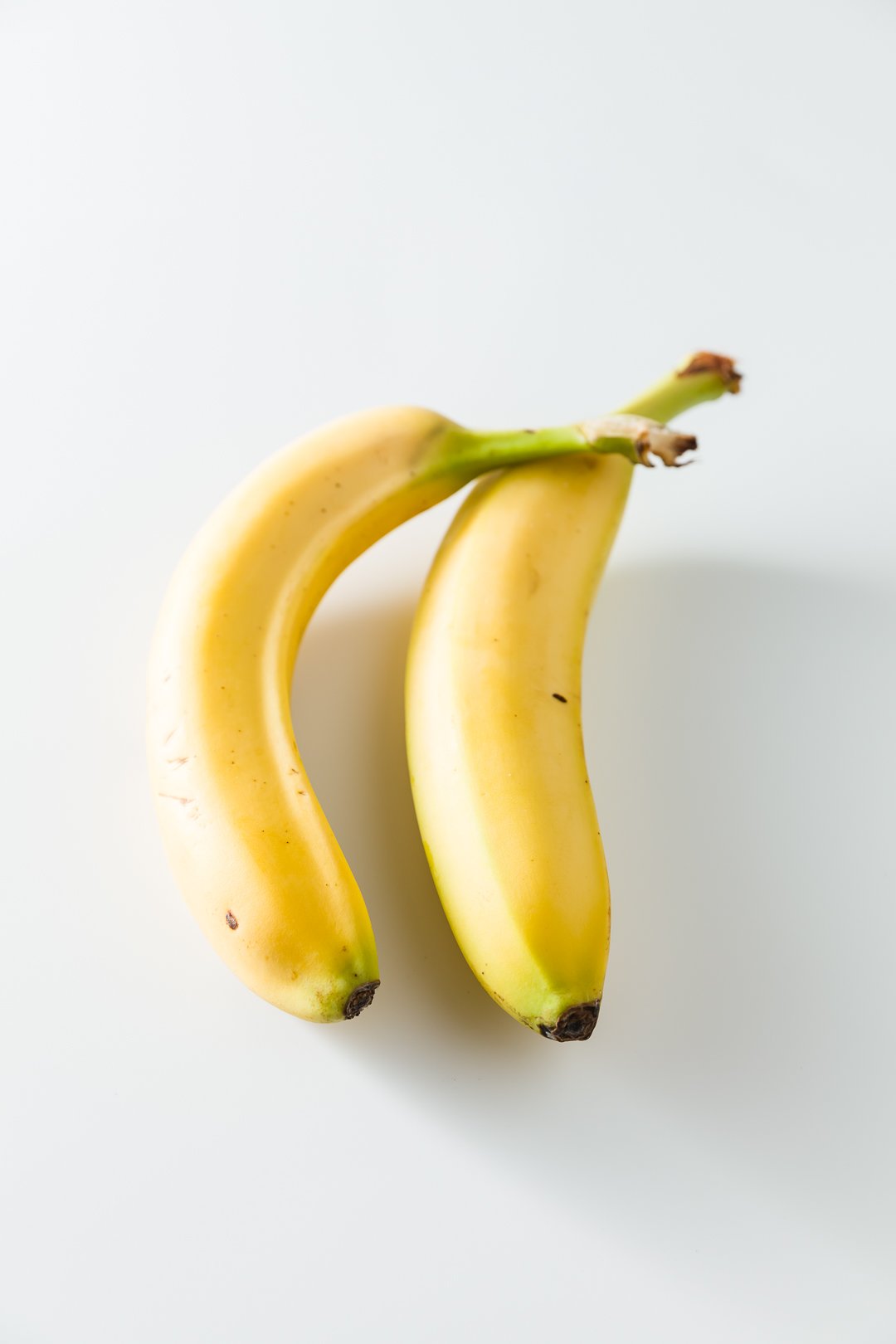 My Grandma did not at first understand my husband’s love for bananas. On our premier trip together to Florida (home of all Jewish grandparents, at least those originally from New York), my grandparents took my husband (boyfriend at the time) and me out for a typically early Floridian dinner. We returned to their condo and my husband headed to the kitchen for a banana. Had he reached for a piece of her golden glow cake or a scoop of ice cream, the world order might have been maintained. However, “Who eats a banana after dinner?” Surely my husband must be a strange bird with some kind of eating problem.

Grandma sent Grandpa out to the store the next day to buy more bananas. My husband was sure to eat them out of house and home – at least in terms of bananas.

During future visits, my grandparents learned to prepare in advance, keeping plenty of bananas on hand to avoid any big scares (like an empty banana bowl).

I even heard Grandma mention to my husband that eating bananas must be what keeps him so slim. “Everyone should eat more bananas.” I guess she’s come to terms with his second love, 94011 (the PLU code for organic bananas). Phew. 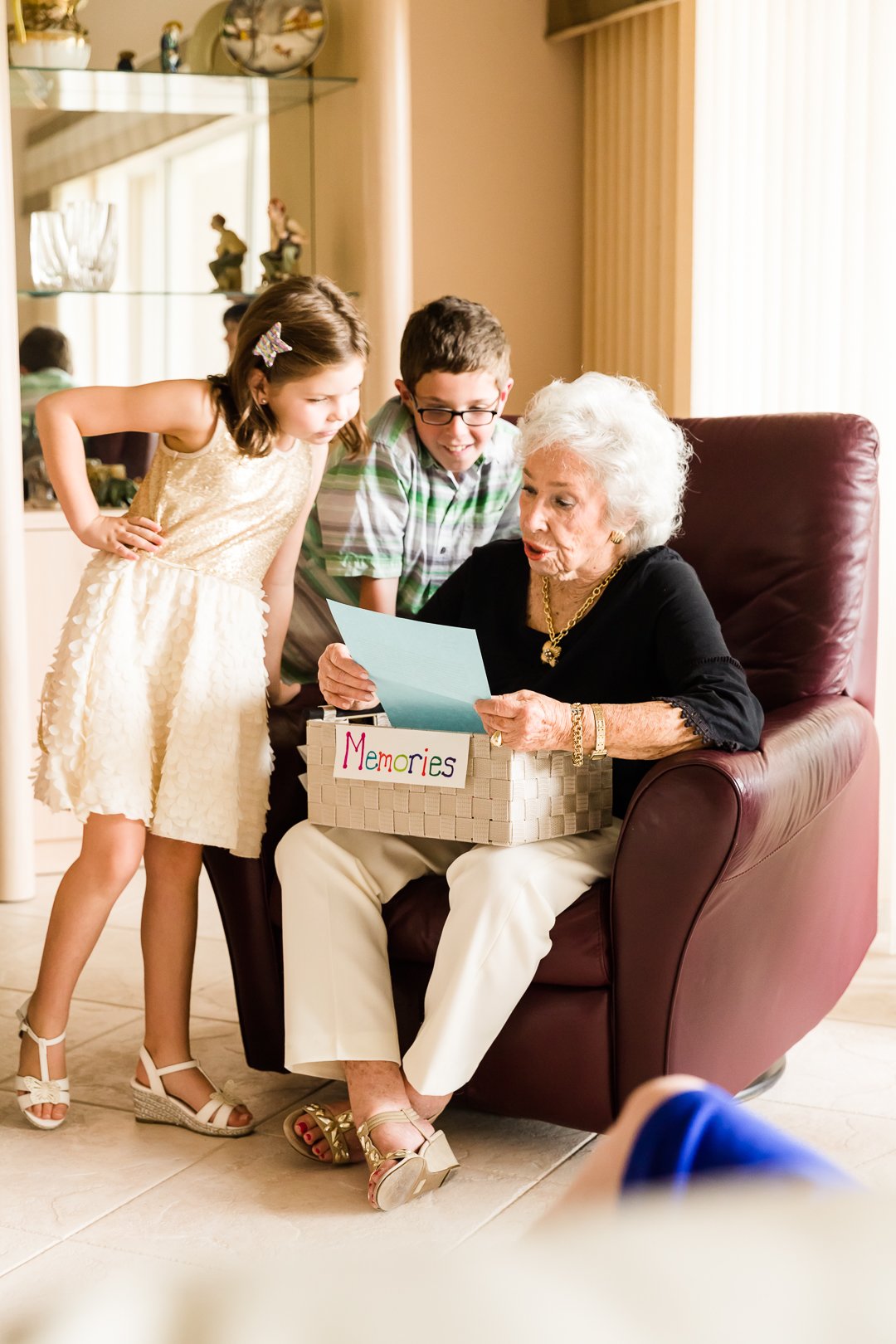 Grandma just turned 90 and we read through tons of memories shared by family and friends. We didn’t talk about the banana story. But, she can read it here!

As even further evidence of Grandma’s lack of concern about over-consumption of bananas, she sent me her favorite banana cake recipe and encouraged me to give it a go as cupcakes. I think she also liked the idea of the fame of being mentioned in my blog.

The nice thing about all of Grandma’s recipes is that they are easy. The week that I first made these cupcakes, I logged 62 hours at work. I also had a brunch to go to on Sunday and banana sounded like a good breakfast cupcake flavor.

These are some of the easiest and best cupcakes I have ever made. I love them! 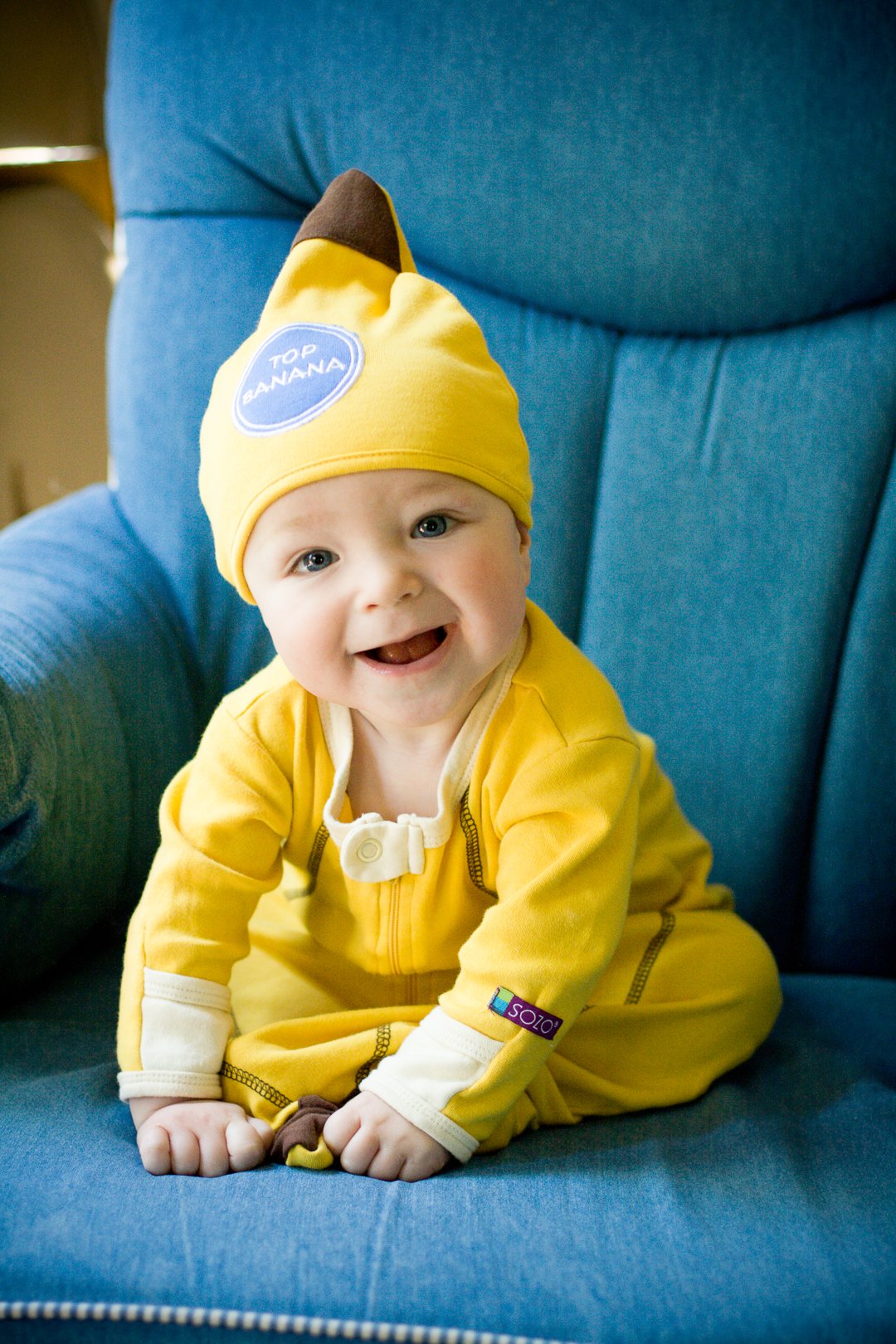 We even dressed Myles as a banana when he was a baby.

This was all before Myles was born.

It turns out that he ended up being a banana lover too!

One of his first words ever ended up being, “Banan,” and today, at age nine, a day isn’t complete for him if he doesn’t eat three bananas. The boy is a little obsessed.

If you have a banana-loving family, I hope you love these cupcakes as much as we do!