This simple, classic cinnamon crumb cake is topped with big, fat crumbs and has a sweet stripe of cinnamon and sugar down the middle!

This is the perfect brunch cake, but it’s also wonderful for snacking on at any time of the day. I can’t help but pick crumbs off the top whenever I walk by.

You’ll need a full tablespoon of cinnamon for this cake to make the wonderful cinnamon swirl. You may also want to have a little extra cinnamon on hand, to do a sprinkling of cinnamon and sugar on top of the crumbs.

I use full-fat sour cream to make the cake nice and moist and highly recommend you do the same. The cake won’t taste exactly the same if you make a substitution, but you can use yogurt or Greek yogurt if that’s what you have on hand.

Rolled oats, not steel-cut oats, are essential for the amazing crumb topping.

The rest of the recipe’s ingredients are pantry staples – sugar, brown sugar, butter, eggs, flour, and the like.

Start by mixing cinnamon and sugar in a bowl and putting that aside. You’ll use it in a bit.

Next, cream butter and sugars in a mixing bowl until the mixture is light and fluffy. Beat in eggs, one at a time, then add the sour cream and vanilla.

In a separate bowl, whisk together dry ingredients – flour, baking powder, and salt. Add the dry ingredients a little bit at a time to the wet mixture until everything is just combined.

Now comes one of my favorite parts of this cake – the cinnamon sugar layer. It’s really easy to add; spread half of the batter in the pan, and then top with cinnamon and sugar.

Cover that layer with the second half of the batter.

Crumb cake would just be cake without the topping. People make crumb topping in many different ways, but my favorite topping is a mixture of melted butter, brown sugar, flour, and rolled oats. Spread the crumbs over the top of the cake before baking.

Once the cake is out of the oven, let it cool to room temperature and dust with cinnamon and powered sugar.

What can I use instead of sour cream?

I’ve done extensive testing and I’ve found that you can replace the sour cream with yogurt or Greek yogurt and not notice any difference in texture. Use whatever you have on hand.

How do you recommend presenting the cake?

I dust the cake with cinnamon and powdered sugar when I’m done because I love the taste and look. Although the cake is quite sweet and doesn’t really need it, it also looks nice with a simple glaze made of milk and powdered sugar.

How can I store the cake?

This cake lasts about three days in an airtight container. But, you can also freeze it for months or freeze individual slices and bring to room temperature before enjoying. 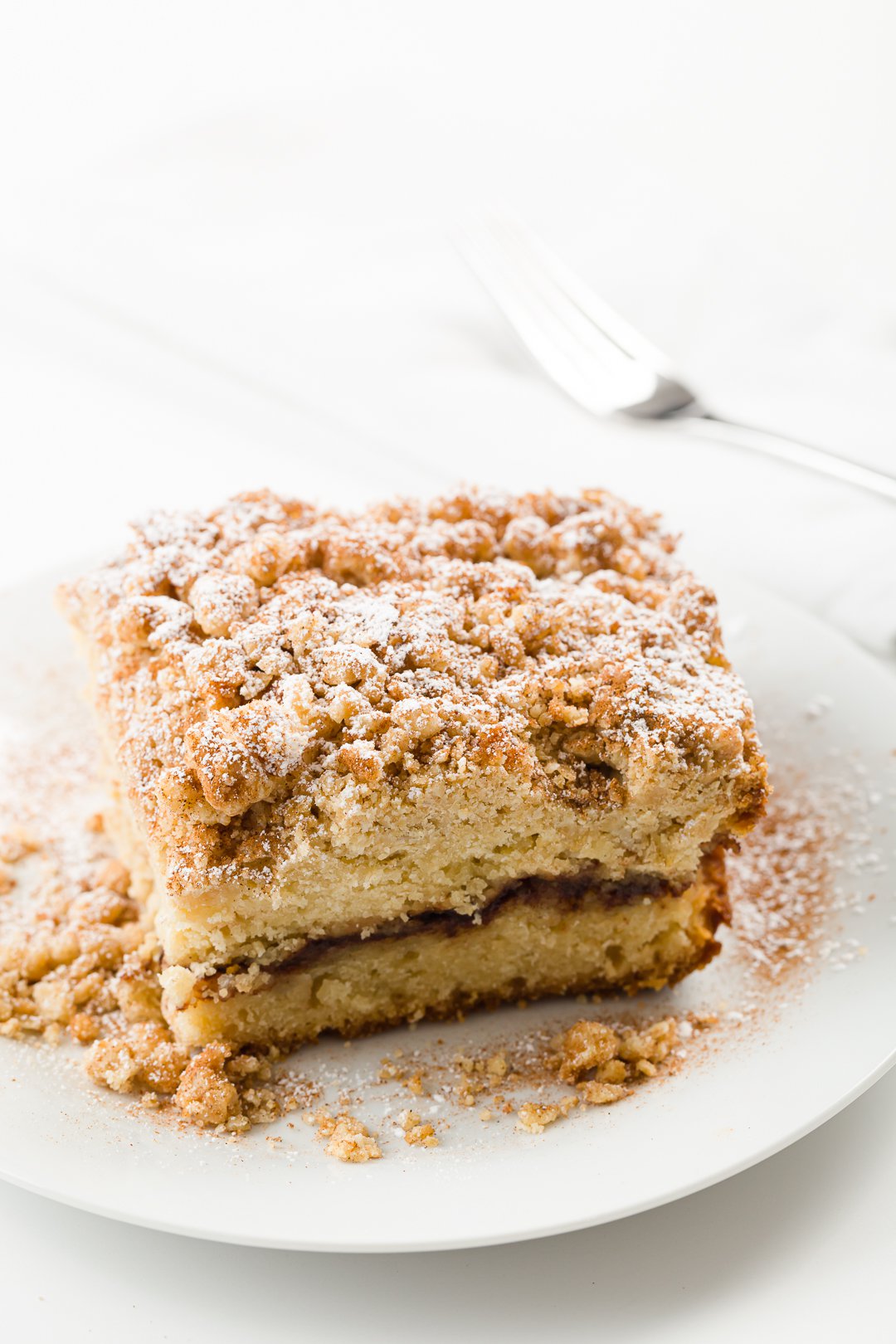 You can substitute yogurt (plain or Greek) for the sour cream if that’s what you have on hand. Adapted from AllRecipes Sour Cream Coffee Cake III.