These fresh blueberry cupcakes are loaded with berries and are even topped with a blueberry frosting swirled with vanilla! They are so moist and have a hint of lemon and vanilla.

In addition to the pantry basics in my favorite vanilla cupcakes, this recipe requires lemon zest and 6 ounces of fresh blueberries for the cupcake itself.

The frosting requires 3 ounces of fresh blueberries in addition to the butter and sugar found in my classic American buttercream frosting.

If you’ve never made cupcakes before, read my cupcake FAQ to learn some basics before getting started on this recipe.

Many of my best cupcakes are variations on my vanilla cupcake, and this one is no exception; that recipe is tried and true and, once you master it, it can be adapted to so many different flavors.

To make these cupcakes, start with the recipe for my vanilla cupcakes and reduce the amount of vanilla extract you use to 2 teaspoons. Add the zest of a small lemon into the dry ingredients when you start making that recipe, and gently fold in a half pint of blueberries just before baking.

I recommend that you make a swirl of blueberry and vanilla frostings.

Start by making vanilla frosting and then removing half of the frosting from the mixing bowl.

After around five minutes, the blueberries will break down and release their juices. Run the sauce through a sieve to make it nice and smooth.

Mix some of the blueberry sauce into the half of the frosting in your mixing bowl and it will turn a really pretty purple color.

Then, fill half of a piping bag with each frosting. (If you want to make the whole thing purple, then just skip the step of dividing the frosting in half.)

When you pipe the frosting, the two colors will swirl together.

Can I use frozen blueberries?

While I recommend fresh blueberries, you can use frozen blueberries if you bring them to room temperature first. For the berries in the cupcakes, drain off any extra liquid from the defrosted berries before adding them to the batter.

Store in an airtight container at room temperature for up to 3 days or in the refrigerator for up to 5 days.

What other toppings work well with these cupcakes?

If you use my crumb topping, they end up looking and tasting a lot like blueberry muffins. 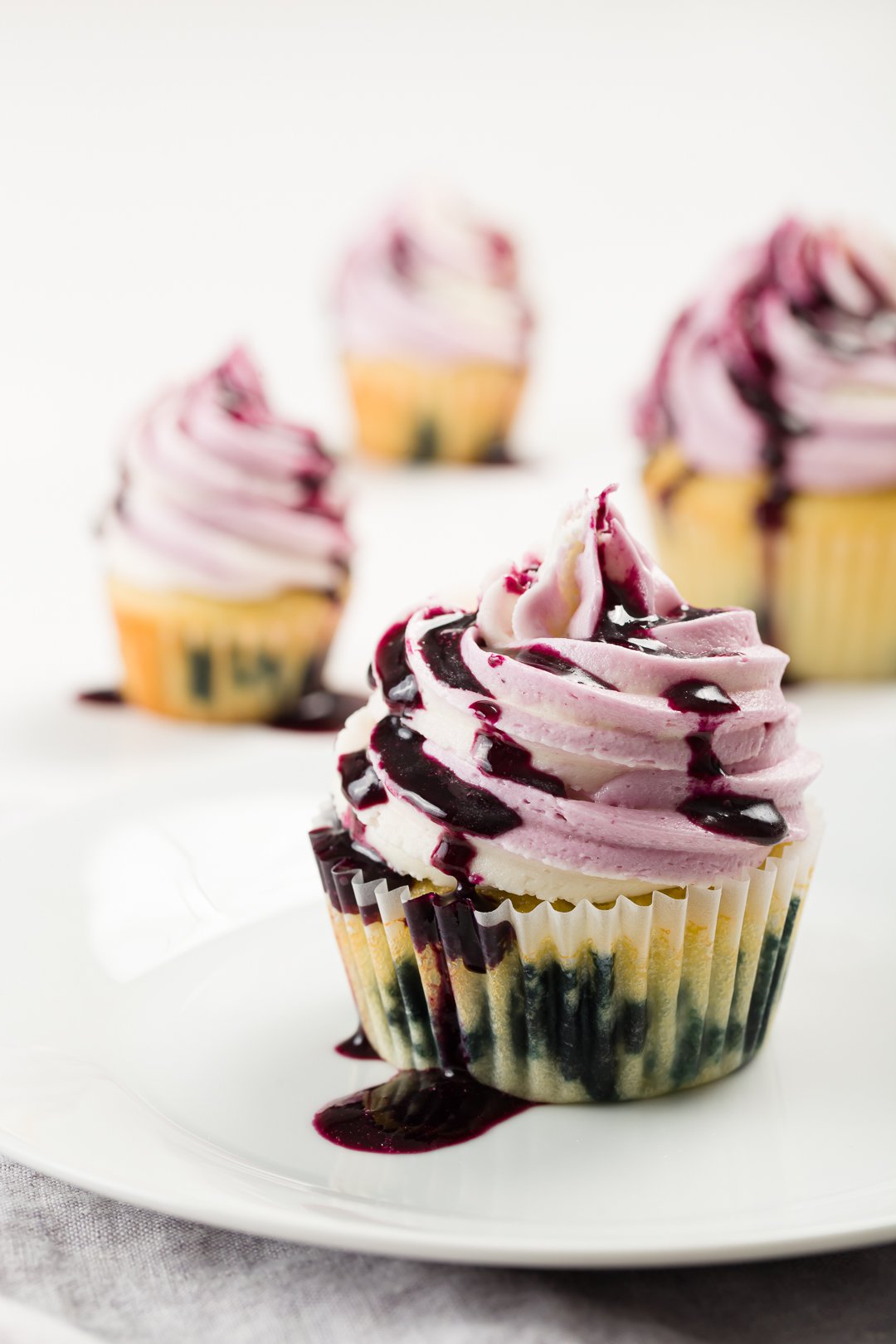