These tiramisu cupcakes are the real thing in cupcake form! The cakes themselves taste just like ladyfingers and they’re soaked in a mixture of espresso and rum. Then, they are gloriously topped with mascarpone custard, whipped cream, and chocolate.

I achieve the perfect topping to cake ratio by baking extra short cupcakes, leaving lots of room for the mascarpone custard and whipped cream.

This recipe takes time and effort, but it’s totally worth it. If you don’t have as much time, try using vanilla cupcakes and tiramisu frosting (that combination is still fantastic, but less authentic).

Tiramisu cupcakes use pantry staples as well as mascarpone, espresso, and rum (which you may not have sitting around).

The recipe requires a decent amount of heavy whipping cream, too; it goes in both the custard and on top of the cupcakes.

Many tiramisu recipes use egg whites in their custard, but I use heavy whipping cream instead so I don’t have to be concerned about getting sick from eating raw eggs.

While I recommend you use espresso to give this dessert the absolute best flavor, you can also use your favorite coffee as long as you brew it strongly. I also recommend that you use a good spiced rum as its flavor will definitely come through.

These cupcakes have three main components – the custard, the cake, and toppings.

Tip: Make sure you have a lot of bowls handy and read through the instructions thoroughly as each part of this recipe has a number of steps.

Start by whisking egg yolks with sugar in a heat-proof bowl. Once they’re completely combined, put the bowl over a double boiler set on your stove on low heat.

Keep whisking until the eggs become a pale yellow color and get thick enough to leave a ribbon when dropped back into the bowl from your whisk.

As soon as the mixture has cooled to the point that it is just warm to the touch, whisk in the mascarpone.

Refrigerate the custard mixture for one hour.

Fold whipped cream into the custard until completely incorporated.

Refrigerate until you’re ready to assemble the cupcakes.

This cupcake recipe is made just as you would make ladyfingers to make the dessert as authentic as possible. It uses separated eggs with beaten egg whites to make a light and fluffy cake.

Beat the egg whites with a little sugar until they get stiff and glossy.

In another bowl, beat egg yolks and the rest of the sugar together until the mixture is pale and thick – it should have a similar appearance to the egg yolks you prepared for the custard but it doesn’t get heated.

Tip: Be very careful to gently fold ingredients and to not overmix. You want the cake to be light and airy, not dense, and it gets much of its lift from the aerated eggs.

Fill a pastry bag with a 1/2 inch round tube or cut the end off of a piping bag or even a plastic freezer bag. Carefully load the bag up with the batter and distribute evenly among cupcake liners. The liners should be almost half full.

Tip: I suggest using foil liners or baking cups to make sure that the cupcakes maintain their shape. You can also drop the cupcakes into a second paper liner after they are done, like I did in these photos.

Bake for 13 minutes or until a toothpick inserted into the center of a cupcake comes out clean. Cool to room temperature on the counter or on a cooling rack.

Remove the custard mixture from your refrigerator and distribute it evenly over the espresso and rum-soaked cupcakes.

Refrigerate cupcakes for 4-6 hours. Then, pipe or spread whipped cream on top of the custard mixture on each cupcake.

Sprinkle with cocoa powder and chocolate shavings and serve!

Can I make and serve these immediately without waiting 4-6 hours while the custard-topped cupcakes rest in the refrigerator?

You can, but they won’t taste as good. I recommend that you make the cupcakes the day before you plan to serve them. The time they spend in the refrigerator will let the flavors meld together.

How do I store them?

Once they’re assembled, they will last about three days in the refrigerator. Do not freeze them.

Are there any shortcuts I can take?

You can save a little bit of time by using store-bought whipped cream instead of making it from scratch. You could also use a vanilla cupcake mix instead of the ladyfinger-like cupcakes (just be sure to fill the liners less than you normally would to leave room for the topping).

Can I leave the rum out of this recipe?

Absolutely! The cupcakes won’t taste quite as authentic, but they’ll still taste great. 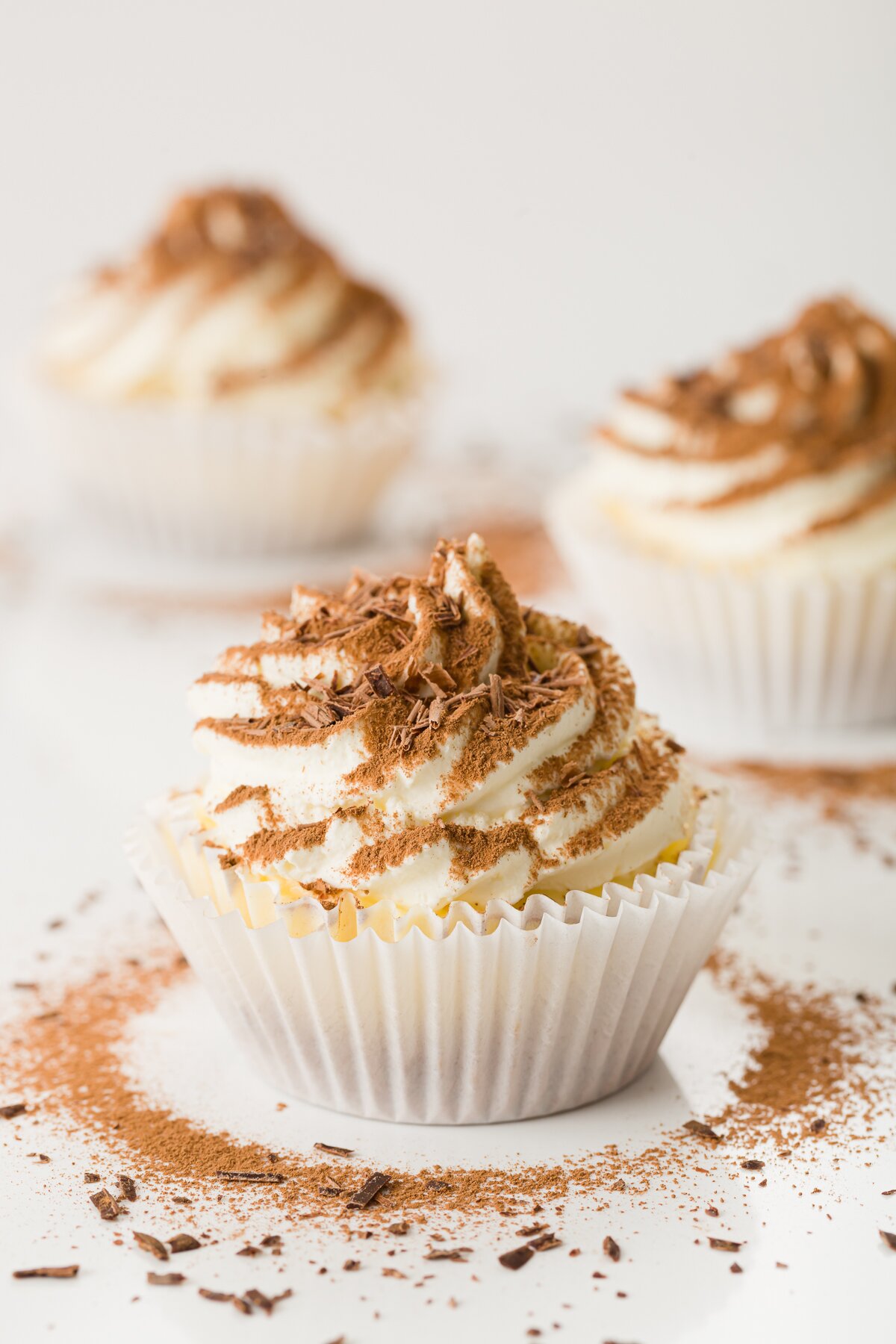 Once they’re assembled, they will last about three days in the refrigerator. Do not freeze them. I suggest using foil liners or baking cups to make sure that the cupcakes maintain their shape after soaking. You can also drop the cupcakes into a second paper liner after they are done.