Moist yellow cupcakes stuffed and topped with caramel icing make for perfect caramel cupcakes! The cake is dense and caramel-flavored (it’s made with sweetened condensed milk) and the icing is crunchy on the outside and smooth and soft on the inside.

The caramel icing is perfect as a thick coating on top of the caramel cupcakes. For an extra decadent dessert, I make them stuffed cupcakes by also filling them with caramel icing!

The caramel icing requires a candy thermometer and is made using more pantry staples:

While the cupcake recipe comes together quickly, the icing takes quite a bit of time to make. Expect to spend close to an hour making the caramel icing recipe.

Start by making the yellow cupcakes:

Fill the cupcake liners about three quarters full and bake at 350 F for 30 minutes or until a toothpick comes out dry.

Remember when I said there wasn’t much crumb to these caramel cupcakes? There is no baking powder or baking soda in the recipe so it doesn’t have much lift and lightness. The consistency is very similar to a pudding cake.

I generally recommend that you test cupcake doneness by seeing if the cupcakes bounce back when lightly touched. These cupcakes don’t have a bounce to them so that test won’t work. Instead, insert a toothpick into the center of a cupcake and it will come up dry when the cupcakes are done.

To make the icing, you will need a saucepan, a skillet, and a candy thermometer.

The key to making perfect caramel is to cook it low and slow. If you try to speed up the process by raising the heat, you will very likely burn your caramel and you’ll have to start over.

Start by putting 2 cups of sugar, butter, and evaporated milk into the saucepan on medium heat. Give a periodic stir to make sure everything is combining nicely.

Reduce the heat to low as soon as the sugar is melted. Do not let this mixture come to a boil!

Next, while leaving the saucepan alone at low heat, put the remaining 1/2 cup of sugar into a skillet on medium-low heat. Move the sugar around the skillet periodically to make sure that it heats evenly.

The sugar will start to melt and clump. Keep heating it and stirring it regularly.

After ten minutes or so, the sugar will completely melt into a glorious caramel-colored liquid.

Do not try to speed up this process by raising the heat; doing so can easily burn your sugar and you’ll have to start over again!

Return your attention to the saucepan, and raise its heat to medium-low. Very carefully pour the hot caramelized sugar into the saucepan and stir immediately. Be careful; it will bubble and steam like crazy.

Put a candy thermometer in the pot and stir continuously for the next 30 minutes or so until the temperature reaches 235 F (the soft ball stage).

Remove from the heat immediately, stir in vanilla extract, and wait about 15 minutes for the caramel icing to cool.

You can get a smooth top (but far less caramel) by dipping cupcakes into the hot caramel. This produces a better appearance than making the recommended filled cupcakes – but you get so much less caramel in each cupcake!

Instead, I recommend that you make filled cupcakes:

Do I have to make these cupcakes from scratch?

What’s so special about these cupcakes themselves?

The cupcake recipe that I use is a yellow cake made with sweetened condensed milk. The cupcakes are quite sweet; they’re a little crunchy on the outside (the cake itself almost tastes caramelized), and moist to the point of having almost no crumb at all.

The recipe would not be my pick for a classic vanilla cupcake with a swirl of buttercream, however it’s the perfect vessel for this amazing caramel.

How do I store these cupcakes?

Store these cupcakes covered at room temperature for three to four days. I don’t recommend refrigerating them, as doing so will affect the consistency of the caramel. 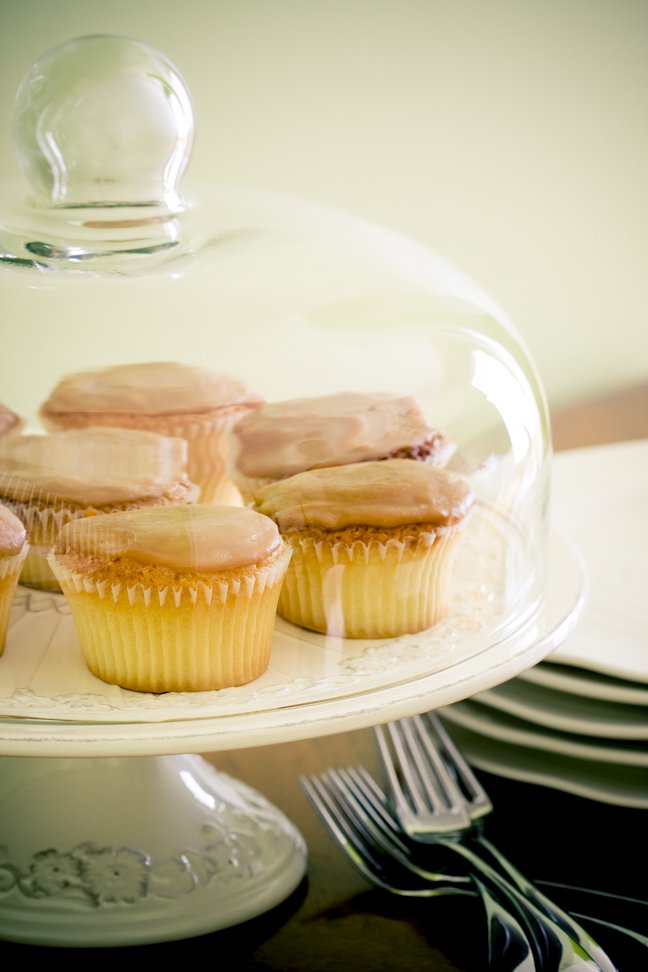 You can start making the icing while your cupcakes bake. Be sure to plan for about an hour of time on the icing. These cupcakes are not supposed to dome. Don’t be upset when they turn out flat-topped. You didn’t do anything wrong. I didn’t leave off baking powder or baking soda in the cupcake ingredients. This recipe doesn’t use them. The cupcakes are more dense and moist like a pudding cake rather than light and crumby like typical cupcakes.