Apple pandowdy is a historic recipe that needs to reclaim its rightful place as one of the stars of fall baking. It has an extra juicy spiced apple filling topped with a rustic pie crust caramelized in the brown sugar apple goodness.

The secret to apple pandowdy lies in its two-part baking process. You first bake it until the crust is lightly browned. Then, you remove it from the oven, cut the crust into squares, push the squares down into the filling, and bake again. The crust tastes so spectacular this way that I almost want to do this every time I make a pie!

The apple filling in pandowdy is more wet than what you’d find in a pie or cobbler. You want the extra liquid to caramelize the crust. In my recipe, this extra liquid is maple syrup. If you like the taste of molasses, you could use it instead. Some other recipes use a mix of maple syrup and apple cider, which also works really well.

For your apples, use a mix of apple varieties – some sweet and some tart. I use a combination of Golden Delicious, Jonathan, and Granny Smith.

I spice the apples with cinnamon, nutmeg, and ginger. You can also experiment with adding allspice, cloves, and cardamom if you like those flavors.

You’ll need one 9″ pie crust. A store-bought crust works fine for this, or make your own! Erin McDowell explains how to do this better than anyone I’ve seen.

Start by peeling and thinly slicing your apples, tossing them in lemon juice, and mixing in brown sugar and spices. Place the apples in a 9″ square pan.

Mix maple syrup and vanilla extract and pour over the apples.

Top with small pieces of butter and cover with pie crust, tucking in the sides. Don’t worry about the pie crust looking perfect since you’ll be cutting it up later on. Cut a few slits into the pie crust to let the steam escape during baking, too.

Tip: You may need to first roll out the pie crust so it completely covers the 9″ square pan.

You could bake the dessert right then, but I like to brush the top with a little milk and sprinkle on some coarse sugar to give the top a sparkly look.

Bake at 400 F for 30 minutes – the top should be lightly browned. Then, remove from the oven, cut the crust into squares, and lightly push each square into the apple filling.

Lower the oven temperature to 350 F and bake for another 30 minutes or until the crust is nicely browned.

Let the dessert set for an hour before digging in!

Why is it called pandowdy?

Cutting the crust and pressing it into the warm apple filling is called “dowdying”. The word “dowdy” means shabby and not neat, so it makes sense that dowdying is making the crust look messier.

Can I make this in a round pan or a skillet?

Yes! You can make this in a 9″ round pan or a skillet.

Can I add a bottom crust?

Sure! Traditional pandowdy doesn’t have a bottom crust, but you can definitely add one if you like.

How long does it last for?

You can store it covered at room temperature for three days or in the refrigerator for up to a week. 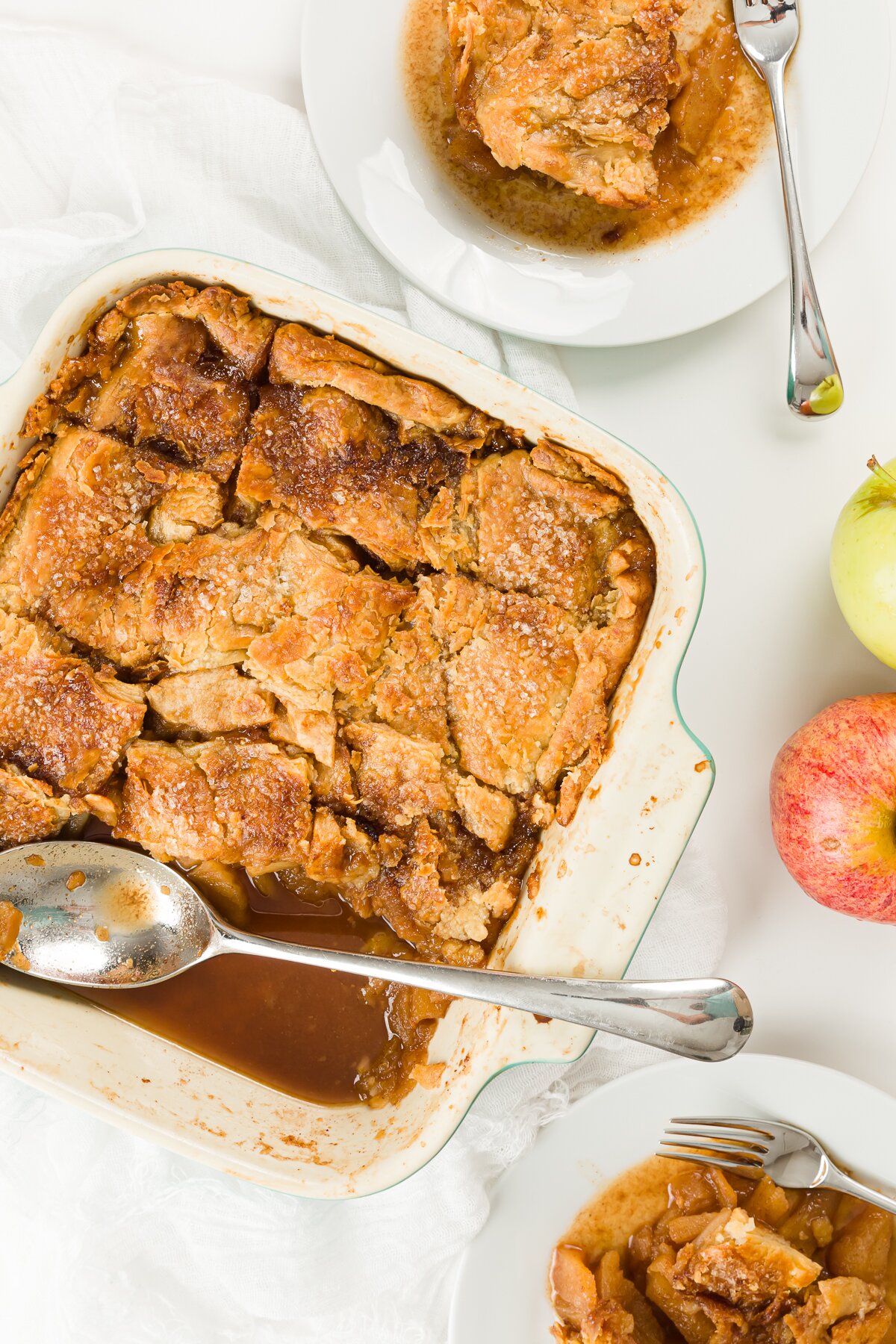 Serve warm with ice cream or whipped cream. Store at room temperature for up to three days or refrigerate for up to one week.