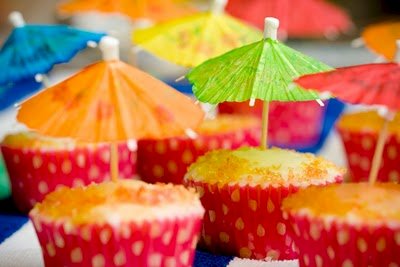 The Margarita Cupcakes Back Story

I was invited to a Memorial Day game of wiffle ball (a game I hadn’t played in years – and as it turns out still haven’t). The last two parties that were hosted by the wiffle ball couple involved margaritas in some way so I felt that this one should, too.

Although we were were sitting on picnic tables in a shady St. Louis park, the cupcakes transported us to a glistening island shoreline

.  There was no alcohol allowed in the park, but who would suspect that the margarita cupcakes I brought contained tequila?

I found a recipe for margarita cupcakes on Baking Bites, one of my favorite blogs.  The margarita cupcake recipe originally came from a Vegan cupcake cookbook called Vegan Cupcakes Take Over the World

. I’m not a vegan, but one nice feature of this cupcake was that the party’s host, who is lactose intolerant, was able to eat them (he put up with the small amount of butter in the frosting).  I may a very slight adaption to the frosting recipe, but the rest has not been changed.

Depending on how much frosting you like, you might consider cutting the frosting recipe in half. I ended up with a lot more frosting than I needed.

The margarita cupcake was chosen for the wedding! The others that were selected were Soda Fountain Cupcakes and Gingerbread Latte Cupcakes.