Tres leches cake is popular in Mexico and all across Latin America. It is translated as three milks cake as it is made with evaporated milk, sweetened condensed milk, and heavy whipping cream (or whole milk).

Tres leches cupcakes are the cupcake version of that cake.

Tres leches cupcakes are airy, like angel food cupcakes (another one of my cake-to-cupcake transformations), as they are made by incorporating whipped egg whites.

Most tres leches cakes are made in a single layer topped with whipped cream or toasted marshmallow frosting. In my cupcake version, I switch up my frosting between both. I’m showing it here with whipped cream frosting as it’s the easier option (and it’s totally delicious).

While you’ll need a number of kitchen staples, the important ingredients here are the three milks (tres leches) you need to make the cupcakes: heavy whipping cream, sweetened condensed milk, and evaporated milk.

After baking the cupcakes, you’ll mix these three milks and pour them into the cupcakes so they can soak overnight. This is what makes the dessert so amazing!

Start making the cupcakes by whipping egg whites until soft peaks form. Soft peaks just barely hold their shape. They fall over shortly after you lift the beater.

Then, add sugar to the egg whites and keep beating until stiff peaks form. Stiff peaks are glossy and hold their shape when the beater is lifted.

Next, beat egg yolks and sugar. As you beat them, they will double in volume and become a pale yellow color.

Add milk, vanilla, flour, baking powder, and salt, and mix until combined. I recommend using whole milk, but any milk will work here.

Next, gently fold the stiff egg whites into the batter.

Tip: Always fold in stiff egg whites by hand rather than using an electric or stand mixer. The speed of an electric mixer can remove the air from the fluffy egg whites and cause your dessert not to rise.

Fill cupcake liners 3/4 full. The recipe should yield 24 cupcakes if you are using standard sized liners.

Bake for 20 minutes or until a skewer inserted into the center of a cupcake comes out clean. Remove from the oven and set on a cooling rack for the next step.

Use a skewer or toothpick to poke lots of little holes in the cupcakes. These will help the cakes absorb the three milk mixture.

Mix heavy whipping cream, sweetened condensed milk, and evaporated milk and slowly pour over the cupcakes. Pour just a little at a time onto each cupcake. Then, go back for a second pass after some of the liquid has been absorbed.

Top with Chantilly cream or marshmallow frosting and dust with cinnamon. Serve immediately or refrigerate for up to three days.

Should I have liquid leftover after pouring it into the cupcakes?

You may have a little leftover liquid after pouring it into the cupcakes. That’s normal. Don’t try to use it all if it isn’t being absorbed.

What do I do if my cupcakes sank after removing them from the oven?

This is totally normal for this recipe. It doesn’t matter since you are topping them with whipped cream or marshmallow frosting!

Do I need a specific type of liner for this recipe since I’m pouring in a lot of liquid?

I initially thought that the liquid would soak through normal paper cupcake liners, but I found that the liners stayed totally dry. So, feel free to use whichever liners you prefer. 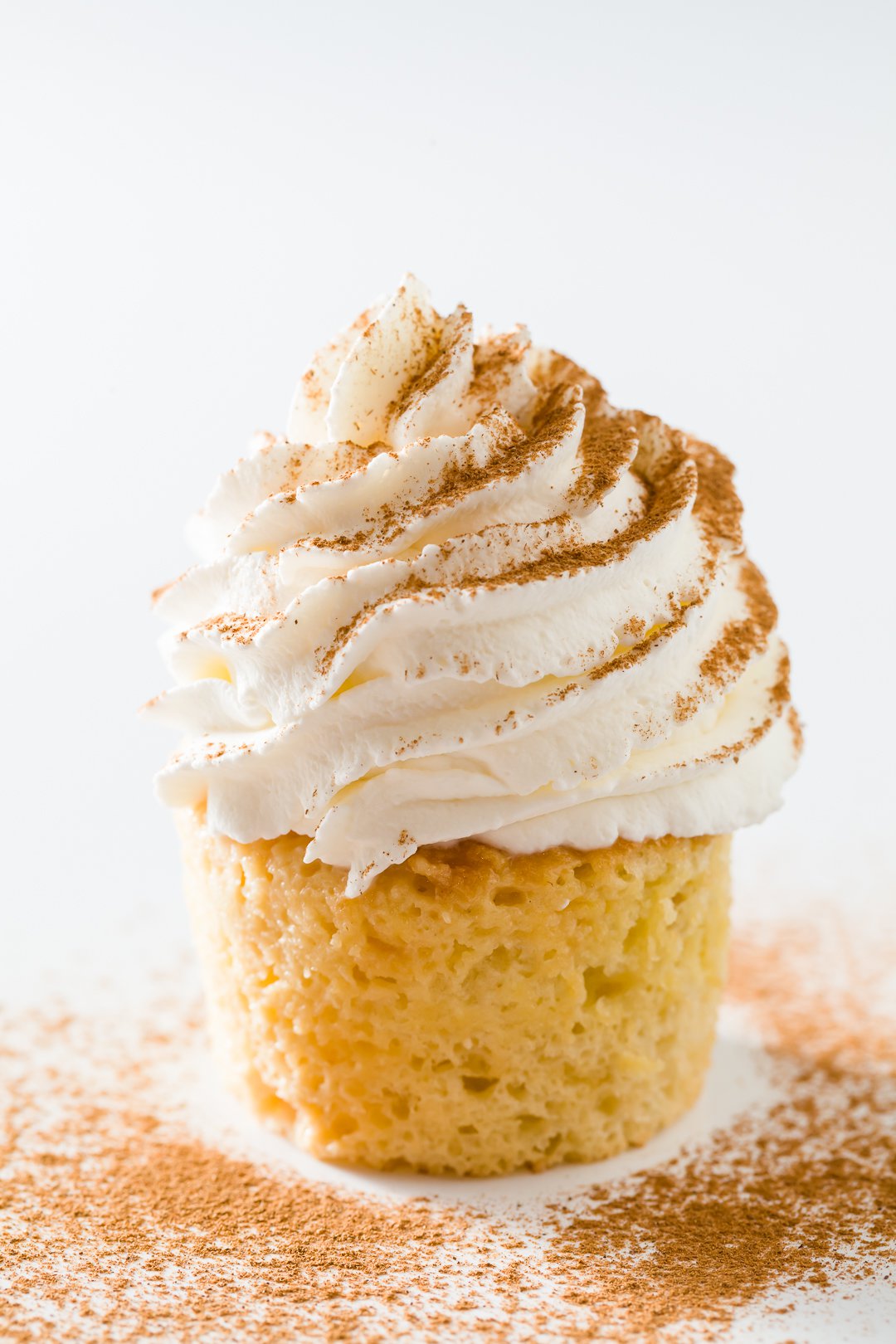 You may have a little leftover liquid and that’s OK. Don’t try to use it all if it isn’t being absorbed. The cupcakes may sink a little bit after being removed from the oven. This is normal. Don’t worry, you are topping them with whipped cream! At first I thought that the liquid would soak through normal paper cupcake liners, but I found that the liners stayed totally dry. So, feel free to use whichever liners you prefer.