Tea and Crumpets the British Way 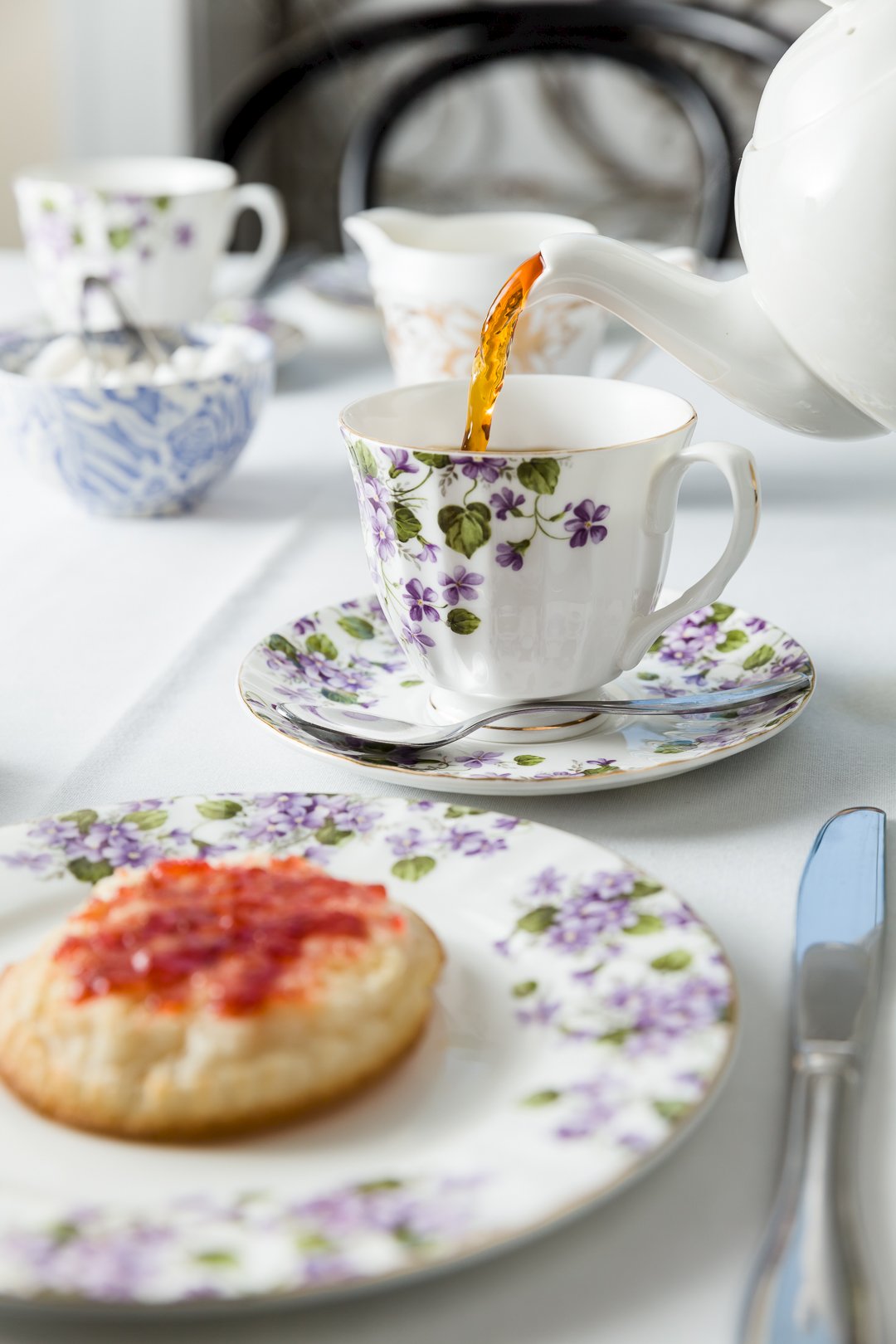 Ever since I wrote about making homemade crumpets, I’ve been answering questions about tea and crumpets for friends, family, and readers.

A crumpet is a type of bread most closely related to the English muffin. Crumpets taste very similar to English muffins and even look like them. The difference is that crumpets are a bit lighter than English muffins. While they have a crust on the outside, their interiors are airy, spongy, and yeasty – and you don’t cut them open. 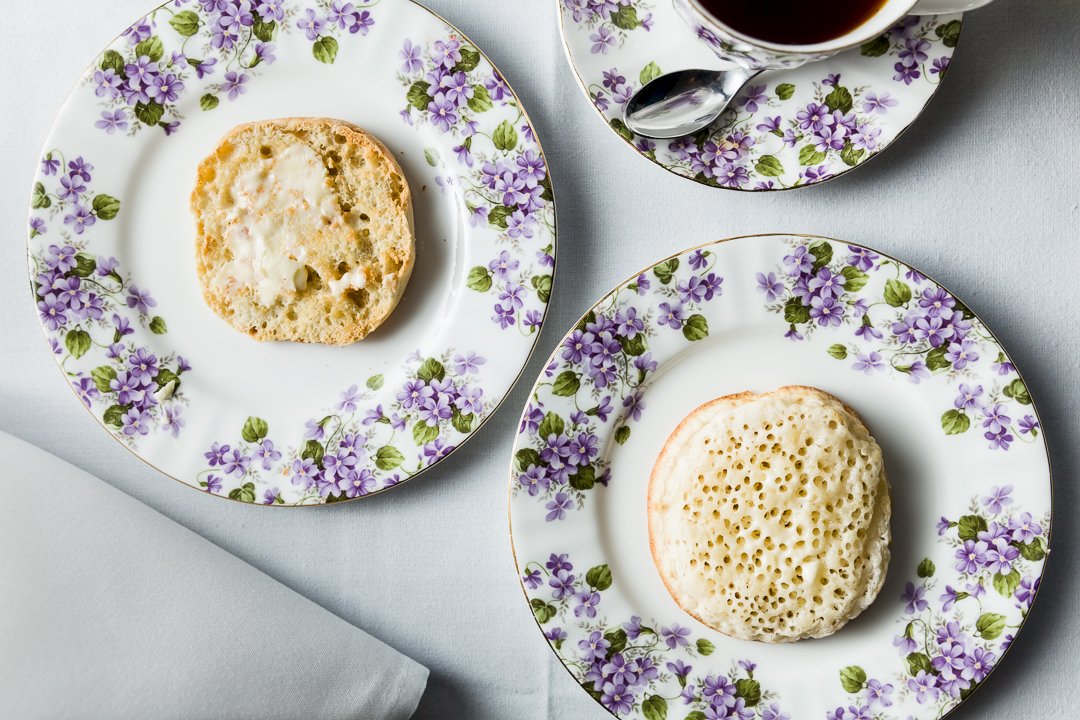 To tell you more about tea and crumpets, I’ve enlisted Jackie James. 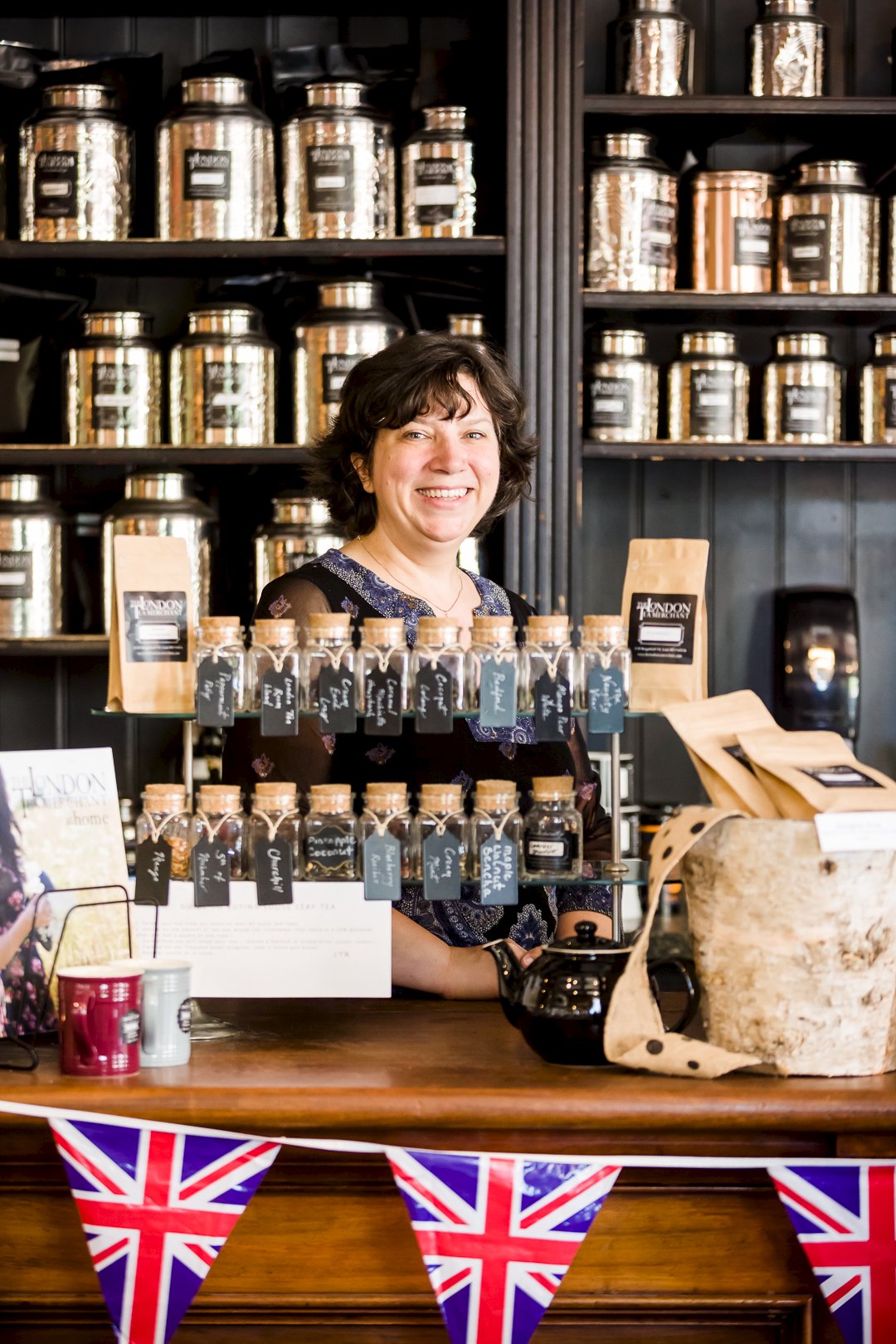 Jackie, a British expat, has enjoyed working in the tea industry for over ten years. Her passion for tea led her to study and graduate as a tea sommelier and tea professional from the World Tea Academy. Jackie spent several years baking and setting up both the tea and the food menus that are currently offered at The London Tea Room in St. Louis. In addition to running the cafe, Jackie enjoys teaching tea education classes which are offered at the tea room every month. 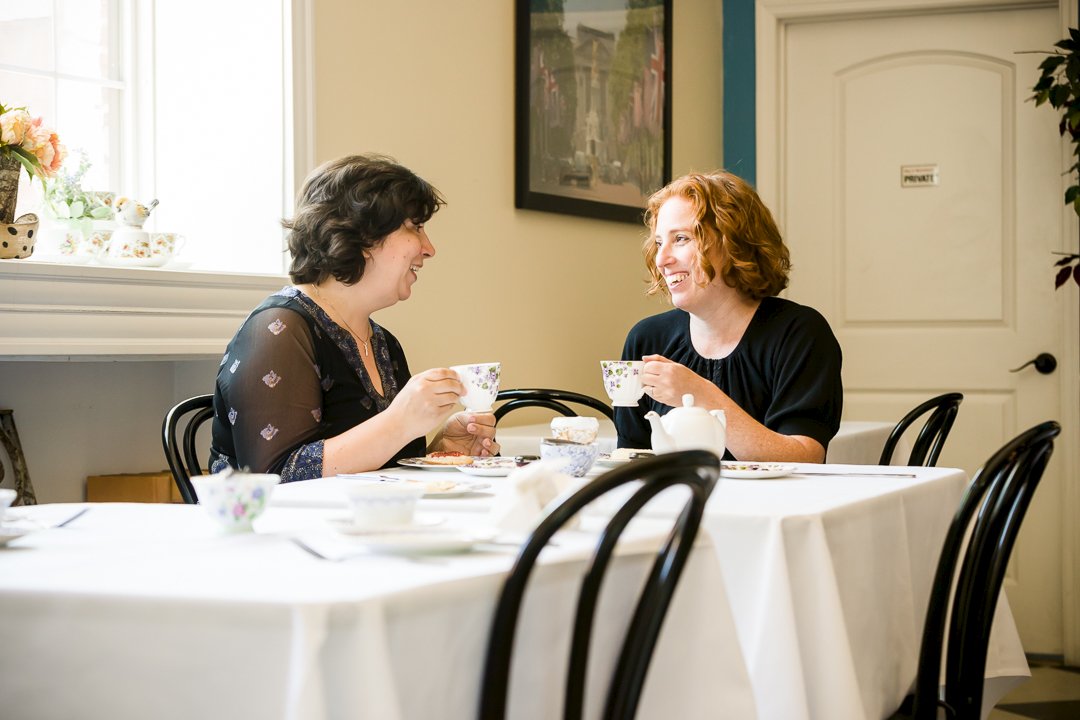 She’s the perfect person to tell us the best way to eat crumpets and the best teas to serve with them. Read on! Her post is below.

As a British expat, I have come to recognize that Americans always associate crumpets (if they have ever heard of them before, that is!) with tea. Crumpets are quite the mystery to those who have never eaten one before.

I have the most wonderful memories from my childhood of toasted crumpets, served hot, with lashings of creamy butter that would ooze and melt into the strange little holes in the top of the crumpet. 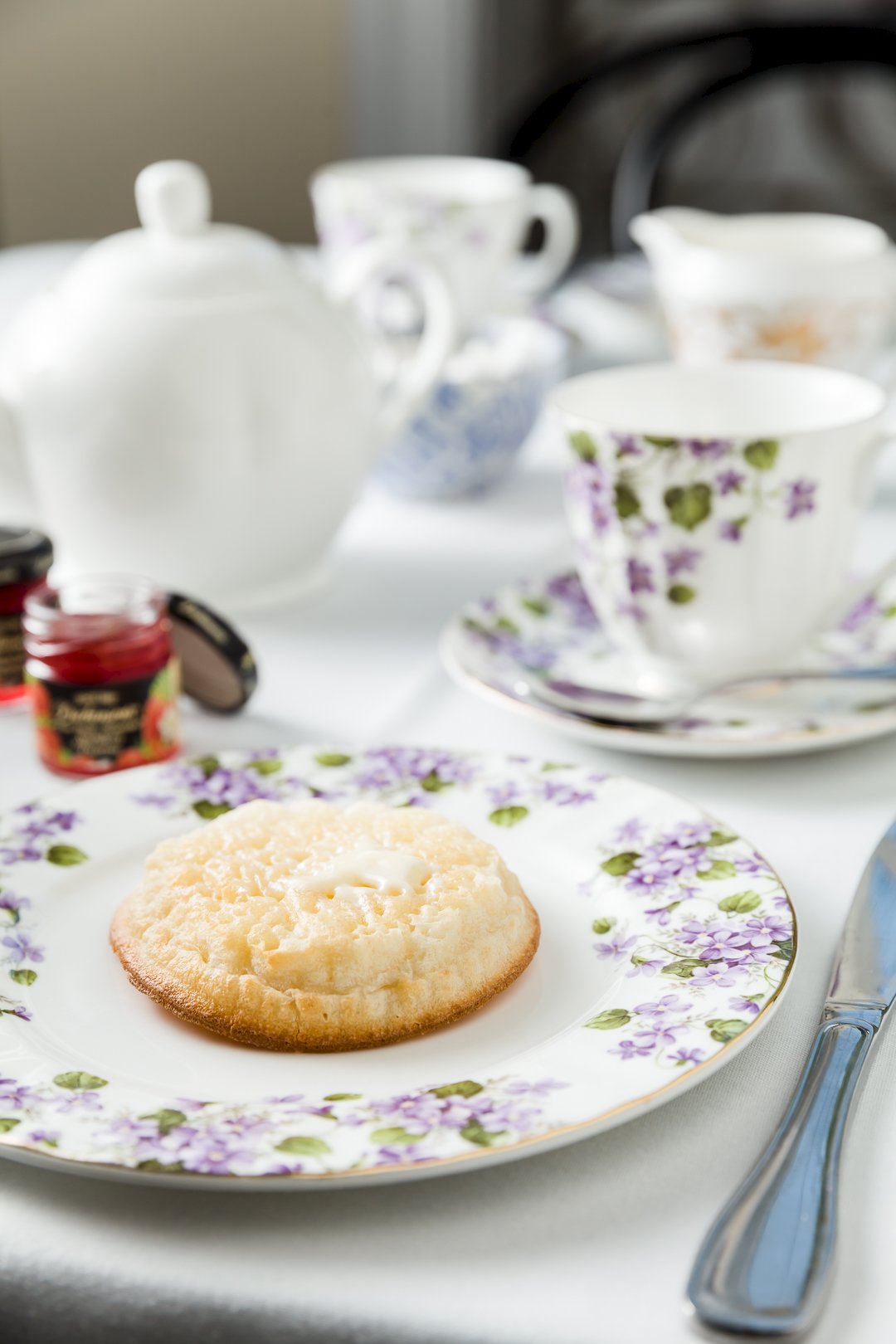 Crumpets were usually purchased at the grocery store and we always found them in good supply in the U.K. Over here in the States, not so much. It must be said that no matter where you are in the world, crumpets are even better when they are made at home.

Crumpets are made on a hot griddle on the stove, in special heavy rings [paid link] to keep their round shape. Most recipes today use yeast to make the crumpets rise. The perfect crumpet should be about three inches across and about one high. They should be lovely and crisp on the outside and light inside.

I enjoy my crumpets with just butter, but many people will add jam, cheese melted on top, or even marmite [paid link] (I can’t even begin to explain what this salty, yeast extract tastes like!). I have a friend who likes to spread peanut butter on hers, but I can’t say that I have ever tried that yet! 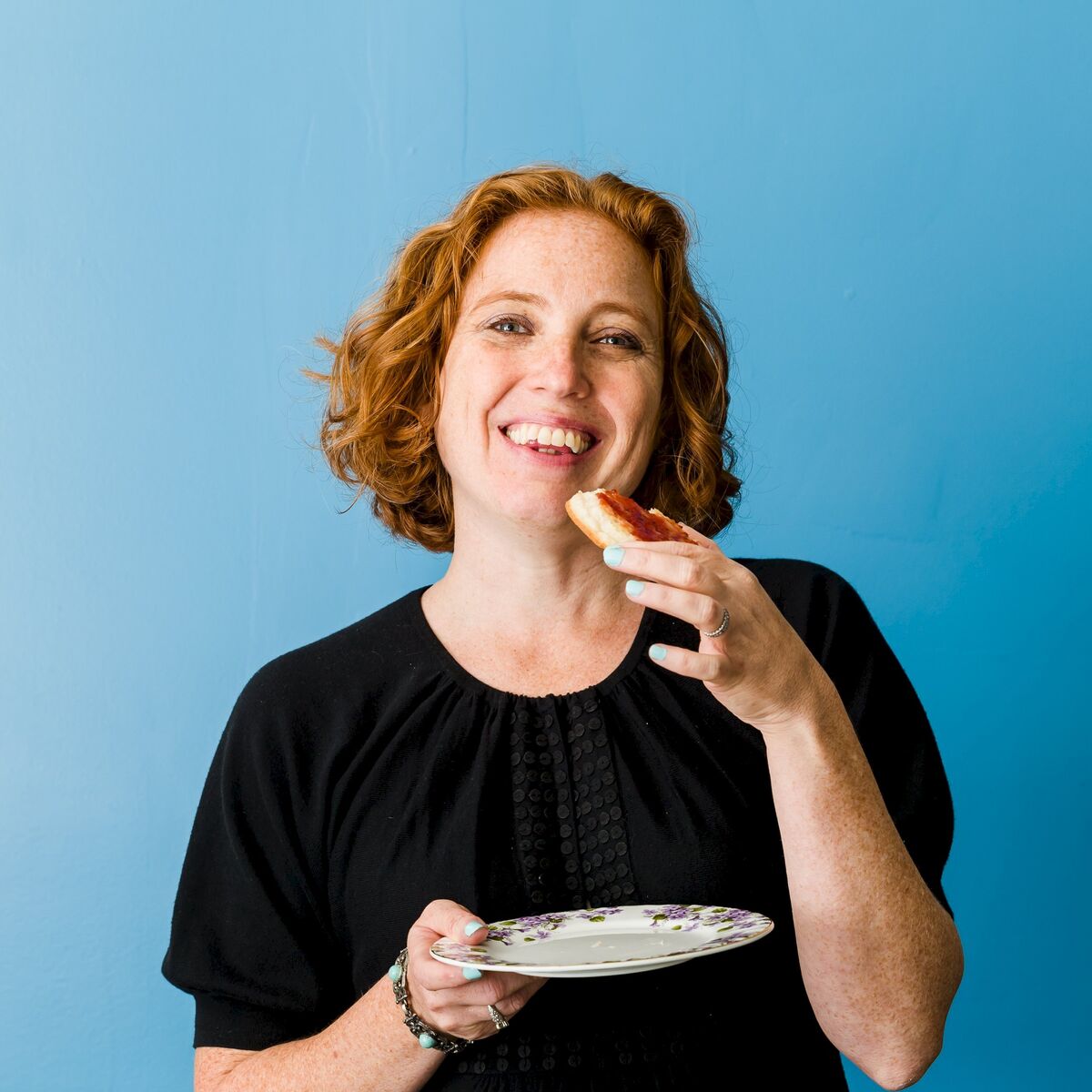 Jackie served me a crumpet with butter and jam!

Crumpets are most certainly a big part of tea time in Britain – not to be confused with drinking tea. Tea time is actually a meal – like supper, but of course hot tea is a staple of that meal. Serving your crumpets with a good hot tea is a must, in my opinion. 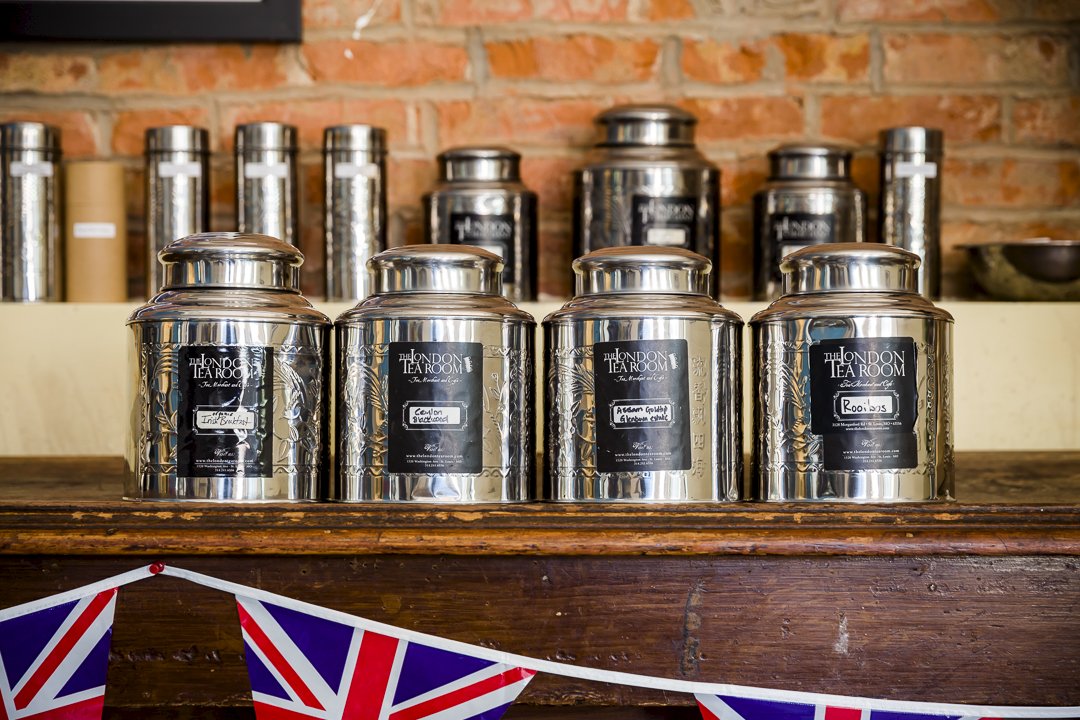 Personally, I love an Irish Breakfast, or a rich, malty Assam with a splash of milk to go alongside my toasty piece of heaven. Most tea we grew up with in England was always a strong, hearty black tea which usually hailed from India. Served with milk and sometimes sugar if you preferred, it paired perfectly with a hot, buttery crumpet. I think I will always associate enjoying hot crumpets and tea with the colder winter nights back in England. Total comfort. For those who wish to avoid caffeine, I would suggest pairing with a rooibos tea. Rooibos is native to South Africa and is a member of the Fabaceae family of plants. Its rich, slightly nutty taste is a perfect compliment to crumpets!

For those who want specific recommendations, here are my top four picks from our shop:

Crumpets have actually been around for several hundred years. John Wycliffe, an early English bible translator, spoke of them as the crompid cake in 1382! I think that goes to show that crumpets are here to stay.

If you have never experienced a traditional British crumpet before, I would definitely encourage you to give it a try. Don’t forget to put the kettle on and make yourself a lovely cup of tea to go along with it. You may end up making crumpets your own tea time tradition.