Homemade Spam Recipe – What, Why, and How

Spam. Mystery meat. No thanks. Nasty. Who eats that stuff? I wanted nothing to do with Spam. I didn’t even know what Spam was – only that it was something to be avoided at all costs. I heard that it was popular in Hawaii and that there, people eat it on rice as Spam musubi. Really?? Then, Heidi Berger posted several times on my Facebook page about Spam cupcakes. “Trust me when I say Spam cupcakes are NOT gross ;-),” she insisted.

I didn’t trust Heidi. I knew that Spam cupcakes would be gross because Spam is disgusting – meat in a can just isn’t right (I blindly thought, having never ingested it). Would homemade Spam be better? What gives Spam its flavor, and could I make a version myself that I would feel comfortable eating? Would my homemade version of Spam then make for a tasty cupcake flavor? I had to find out.

As many of you know, Spam stands for spiced ham. It’s made with pork shoulder and ham. The ingredient list is actually quite small and contains nothing too scary: Pork with Ham, Salt, Water, Modified Potato Starch, Sugar, Sodium Nitrite. Before I made my homemade Spam, I had to buy a can to see what it tasted like.

I found that Spam tastes like salty ham – very, very salty ham. It wasn’t nearly as bad as legend had it. If I ever bought Spam again, I would definitely buy the low-sodium version [paid link].

The best reason for making homemade Spam or homemade anything is that when you make it yourself, you know exactly what is going into it. Homemade Spam is decidedly not mystery meat. It’s just plain old pork and ham.

How Does the Homemade Version Compare to the Canned Spam?

The end result tasted pretty close to Spam. It was just about the right color, the texture was similar (not quite as slimy as the original), and the taste was the same, although significantly less salty.

It was really hard to find a recipe for homemade Spam. The closest thing that I could find was a post on Morgans Menu which describes the general idea of how to make Spam, but it’s short on specifics. I used that post as a guideline, however I strayed from her suggestion of using duck and chicken in addition to the pork and ham; I wanted to stick with the classic mixture. I also got some assistance from local chef Chuck Friedhoff who pointed out that Spam is really just a pâté and encouraged me to look at pâté recipes. I never thought of that before, and I now wonder if a gourmet restaurant could get away with serving Spam if they just called it pork pâté.

Begin by preheating your oven to 300 F.

Finely mince the ham with the garlic in a food processor (I used my mini Cuisinart [paid link]) or by hand.

Dump the pork shoulder, ham/garlic, and Tender Quick into a large bowl and mix by hand until fully combined.

Pack the meat mixture into a bread pan and cover with foil, then place the bread pan into a large baking dish filled 3/4 full with water.

Place the baking dish into the oven and bake for three hours. You want the internal temperature of the Spam to reach 155 F.

Remove from the oven, uncover the bread pan and try not to be too grossed out by all of the fat that has emerged from the meat. Nonchalantly dump all of the fat into a jar or can to dispose of later.

Note: During my first attempt at making homemade Spam, I neglected to dump out the fat. When I later pulled the Spam out of the fridge, it had a layer of white creamy fat on top of it and a layer of natural Jello under that. I could barely stomach it.

Next, cover the bread pan loosely with foil and place a heavy weight on top of the foil. I took bricks and put them in another bread pan and put that bread pan on the Spam. You may need to get creative, but I’m sure you can find something in your house that will work. The whole point of adding weight to the top is to compress the meat and help to extract melted fat and liquid.

Once the Spam has cooled to room temperature, place it into the refrigerator and keep it there overnight.

In the morning, your Spam will be ready to use however you choose to use it.

Note: Since homemade Spam is not canned, it will not last forever. Keep it as long as you would keep ham.

Where can I find Morton Tender Quick?

You can buy it in many grocery stores in the United States or find it on Amazon [paid link]. If it’s not available near you, try an online retailer or consider using another curing mix containing salt, sugar, sodium nitrite, and sodium nitrate.

Why do you use curing salt in this recipe?

Tender Quick (which isn’t a tenderizer) gives the Spam a good mixture of salty and sweet and adds preservatives to keep it from spoiling quickly once refrigerated. The sodium nitrite in the cure also gives the finished product its proper pink color.

What can I do with homemade Spam?

Use it anywhere you’d normally use Spam. For some ideas, you could mix it with greens and black eyed peas for a rich and flavorful casserole (don’t add any extra salt to the mixture as there’s more than enough salt in the Spam), eat it on rice as Spam musubi (I’m still a little skeptical about that one, Hawaii), or save some for homemade Spam cupcakes.

How long will this last?

Homemade Spam is not canned, so it will not last forever. Store it in the refrigerator and keep it as long as you would keep ham. 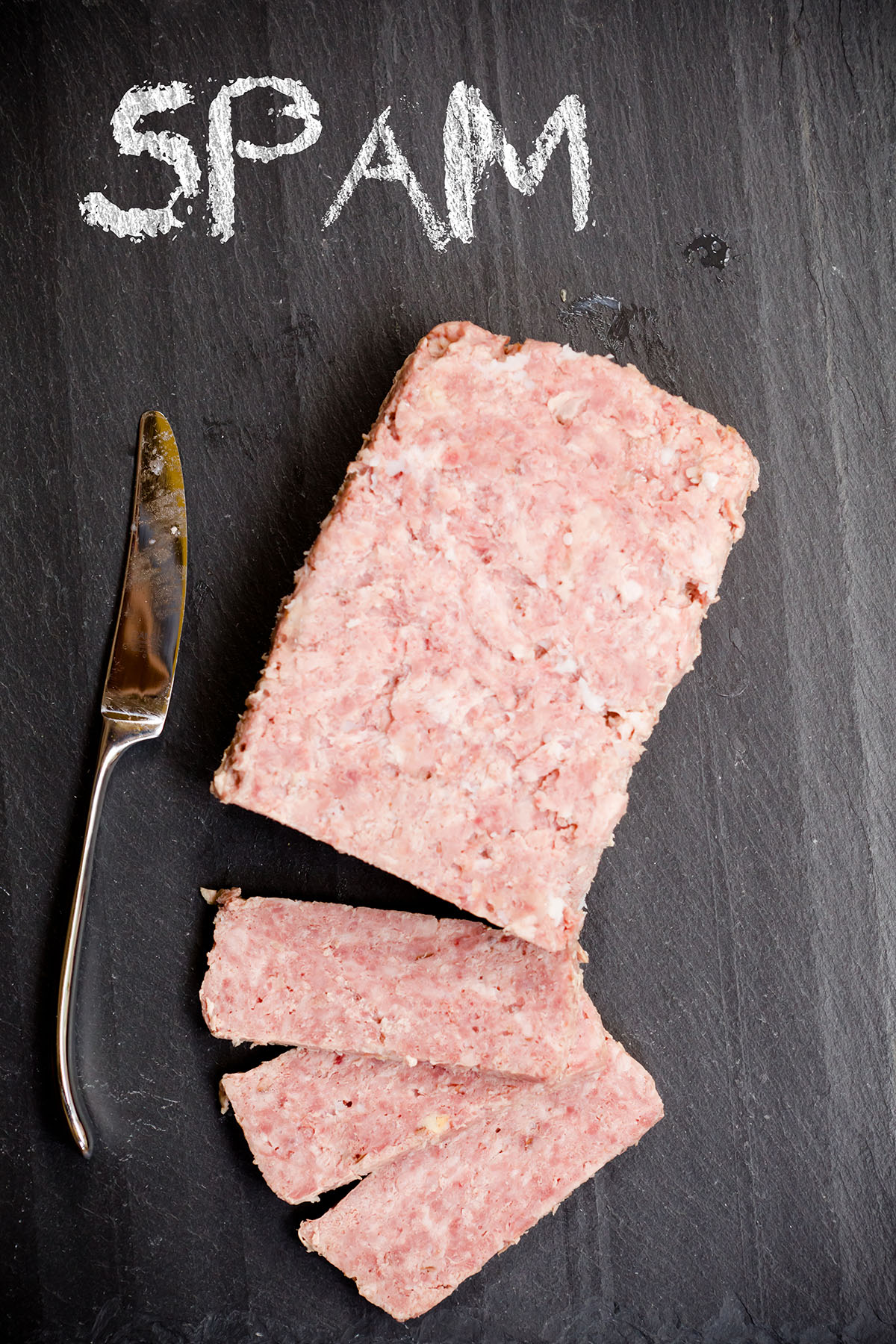 If you can’t find Morton Tender Quick where you are, look for a fast curing salt mix that contains salt, sugar, sodium nitrite, and sodium nitrate. Homemade Spam is not canned, so it will not last forever. Keep it as long as you would keep ham.