My chocolate rugelach are some of the best rugelach I’ve ever tasted (and I am Jewish and grew up in New York!). They are flaky, buttery cookies made with a cream cheese dough and a chocolate cream cheese filling. 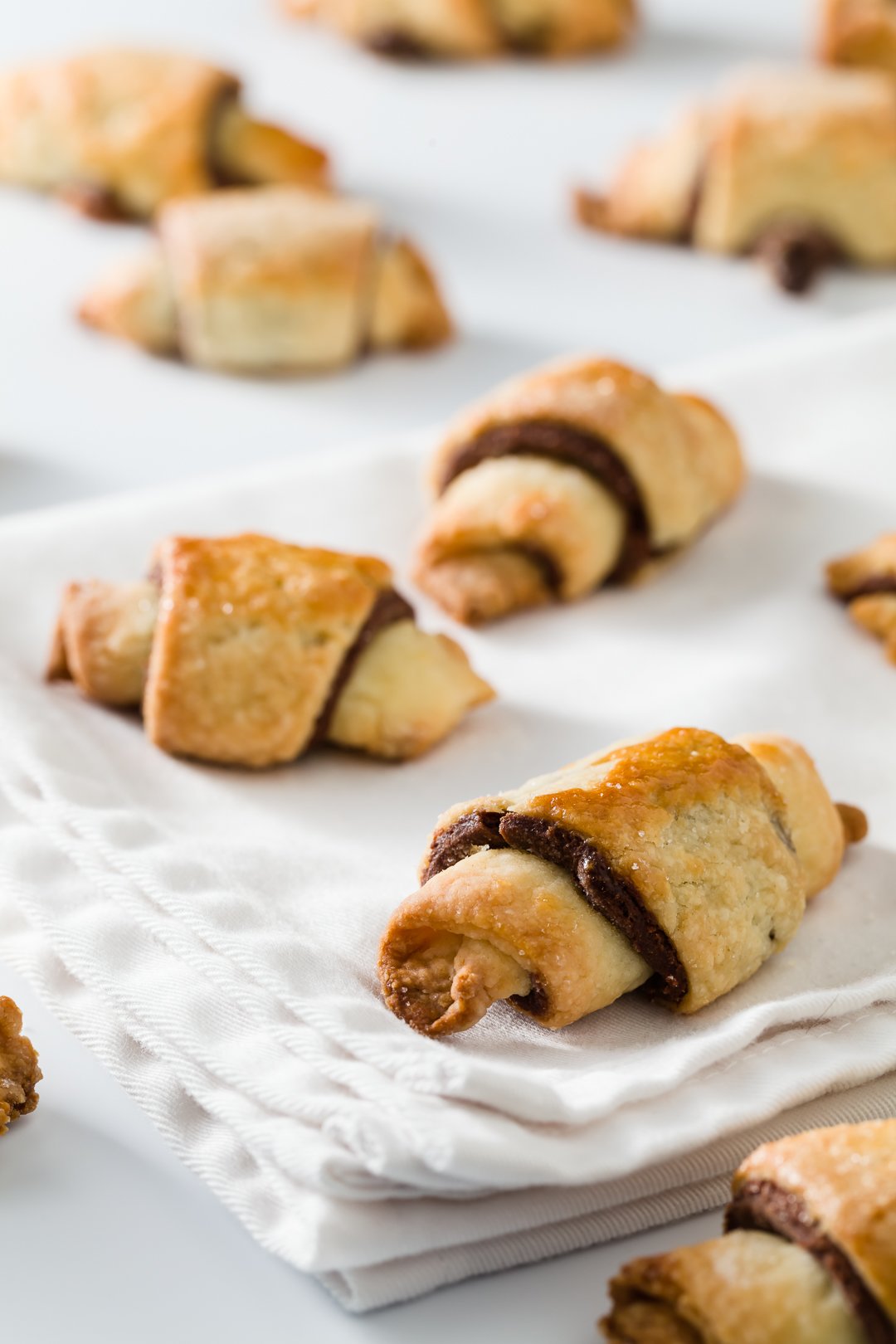 Rugelach were a regular nosh in my house – ever-present beside platters of bagels, lox, and whitefish.

While a rugelach recipe is traditionally filled with jam, poppy seed filling, and/or nuts and raisins, as with Hamantashen, rugelach fillings stray from the classics and you can often find poppy seed, marzipan, or my favorite, chocolate rugelach! 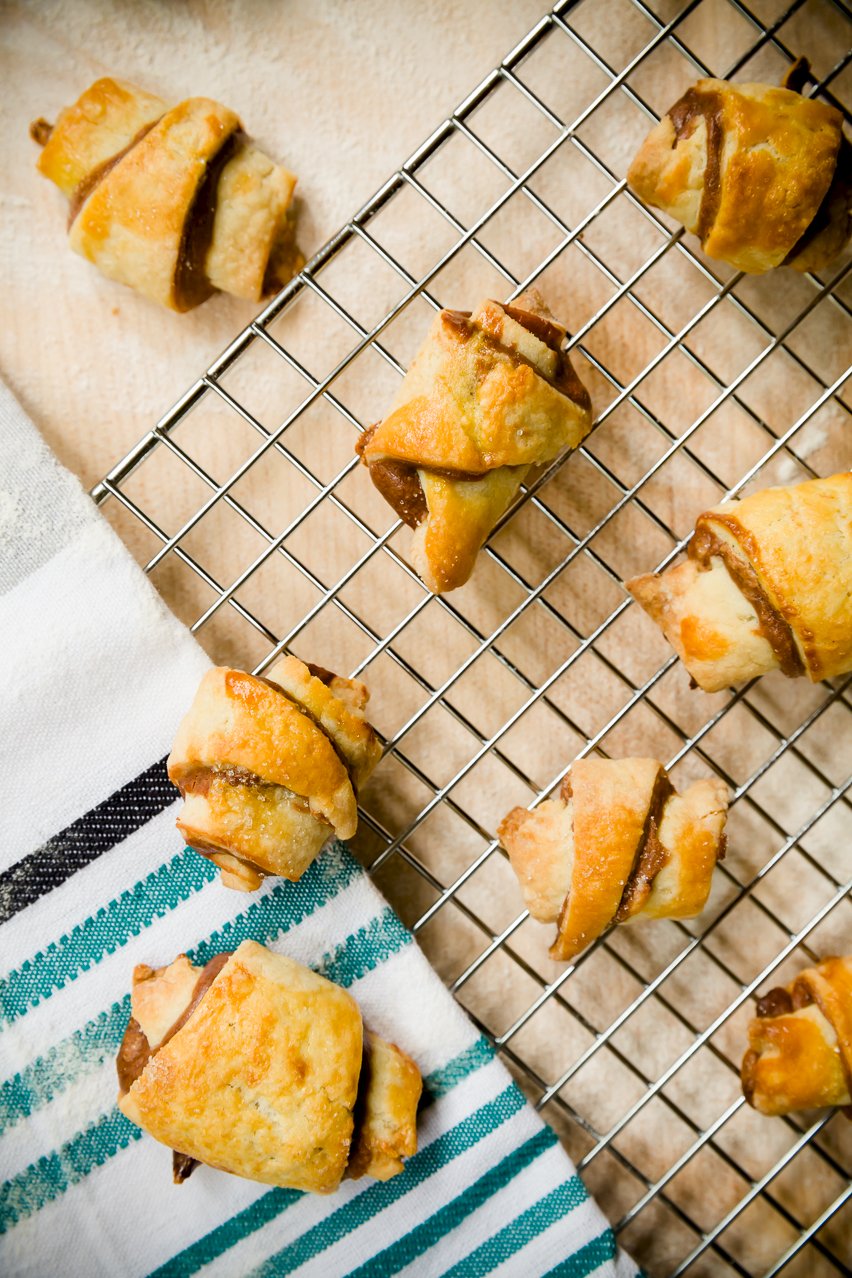 Honestly, I don’t care what the filling is; you could fill rugelach with thin air and I’d still be all over them like Pinterest users pinning Internet memes. 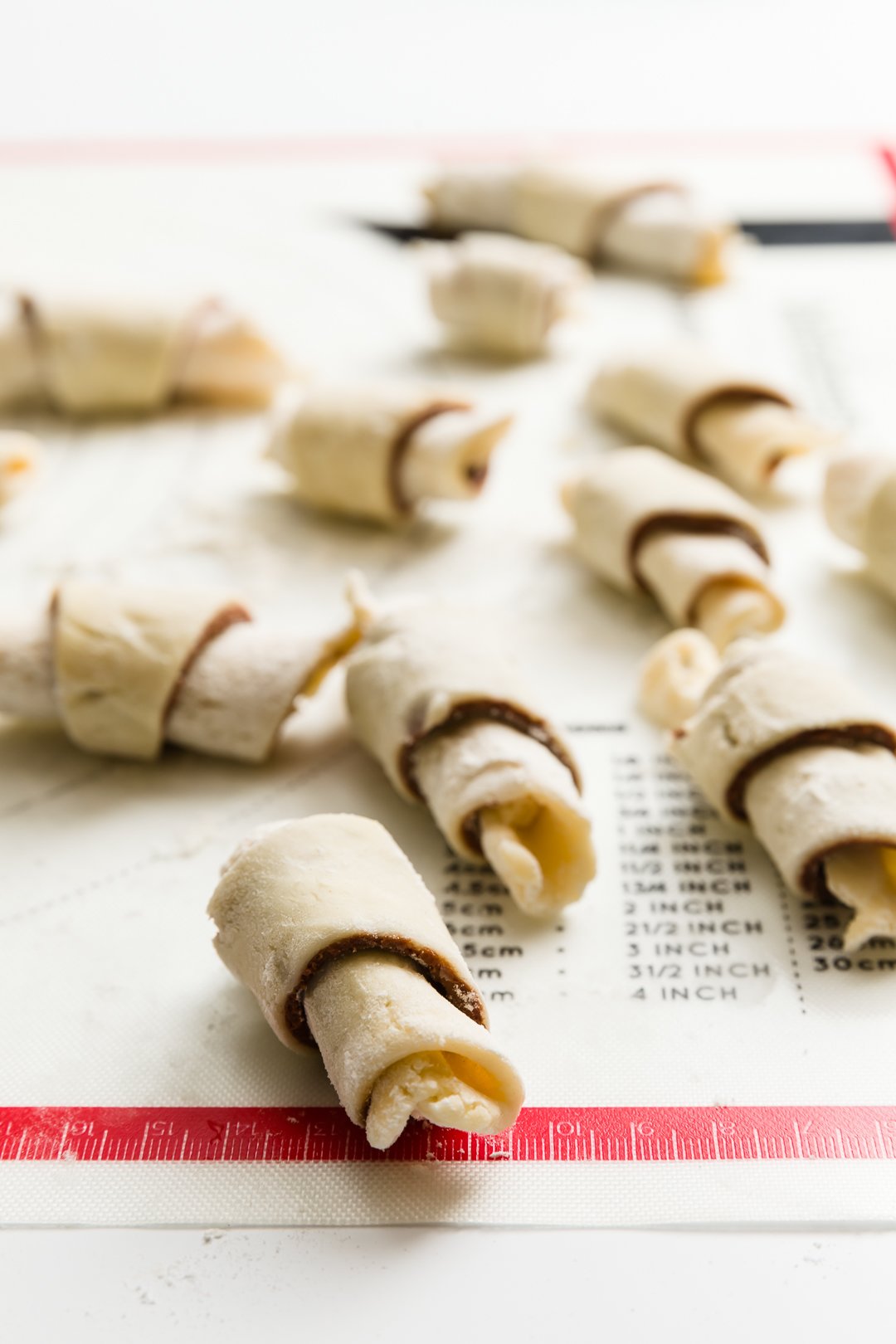 There are two camps of rugelach recipes, yeast-based and cream cheese-based.

The yeast-based rugelach are lighter and more flaky, while the cream cheese-based ones are heavy, buttery, and incredibly rich.

The cream cheese dough that I use in this recipe is incredibly sticky so I suggest working on a non-stick baking mat [paid link] and still throwing down a lot of flour. 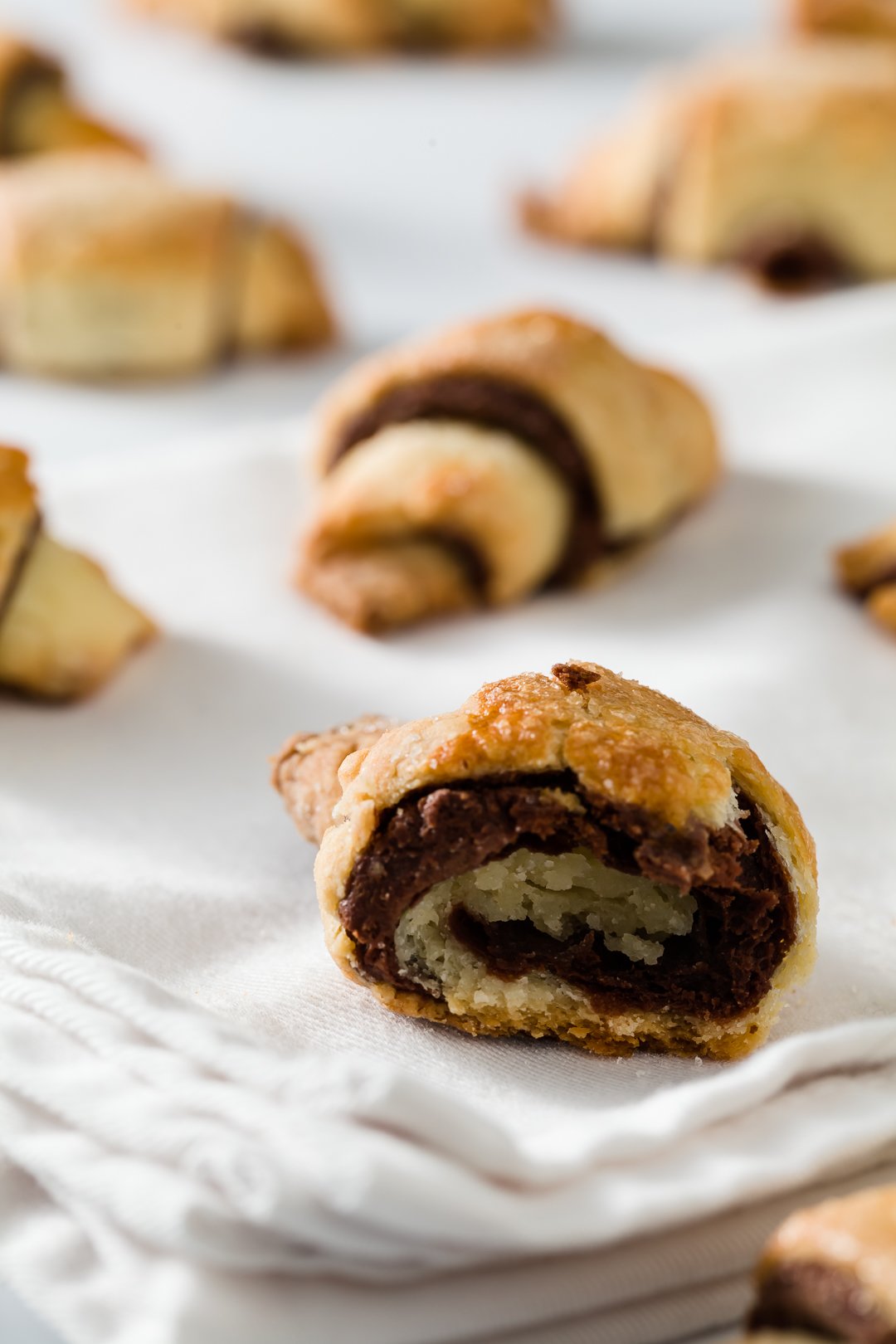 While most chocolate rugelach is filled with a mixture of chocolate and sugar, my filling uses cream cheese (are you seeing a cream cheese trend with my preferences?) to create a chocolate cheesecake-like flavor.

If you want, experiment with other cheesecake fillings or use your favorite cheesecake recipe. You’ll likely have to quarter the recipe so you end up with just one cup of batter.

If you don’t want want to take the time to make the cheesecake filling, but still want something unique and chocolaty, you can use any chocolate spread – like Nutella.

Which Type of Chocolate to Use

I prefer using dark chocolate in chocolate rugelach. However, any kind of chocolate that you love will work just fine.

As always, I encourage you to buy Fair Trade chocolate.

When a company in the United States or elsewhere in the world buys a Fair Trade product to sell, that company pays a fair cost for the product plus an extra percentage, the premium, that is managed by the workers and used on projects to benefit them and their families. 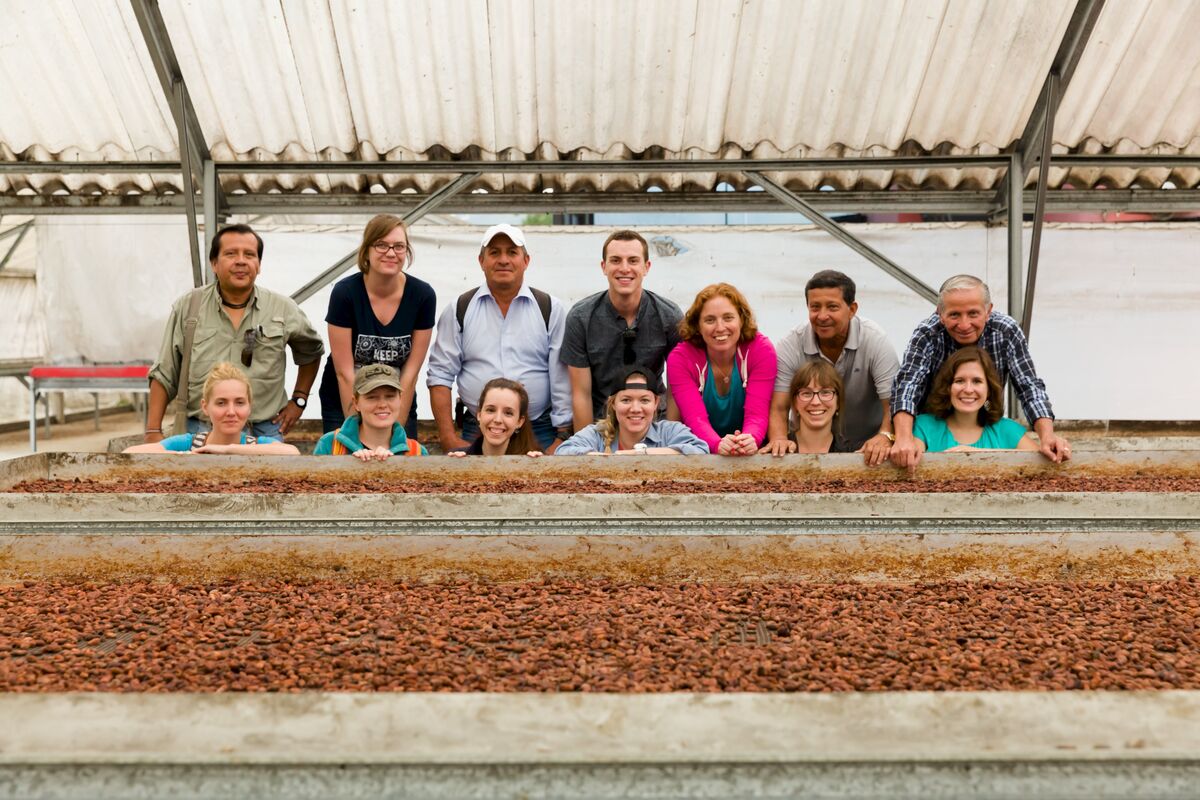 I’m in the pink, trying to lean in to all those tasty smelling cacao beans!

In the case of Fortaleza del Valle, one of the Fair Trade chocolate companies that I got to visit in Ecuador, Fair Trade premiums have been used to invest in pre-harvest financing, pruning and replanting of trees to rehabilitate the farms, education and training, and infrastructure for local organizations. Premiums are also used for things like upgraded machetes and irrigation.

Who you buy your chocolate from really can make a difference in the world. (You can also use Fair Trade sugar and vanilla for this recipe!)

How to Roll Out and Shape Rugelach

Can You Freeze Rugelach?

Just put them into an airtight container and take them out several hours before you are ready to eat them!

When to Eat Rugelach 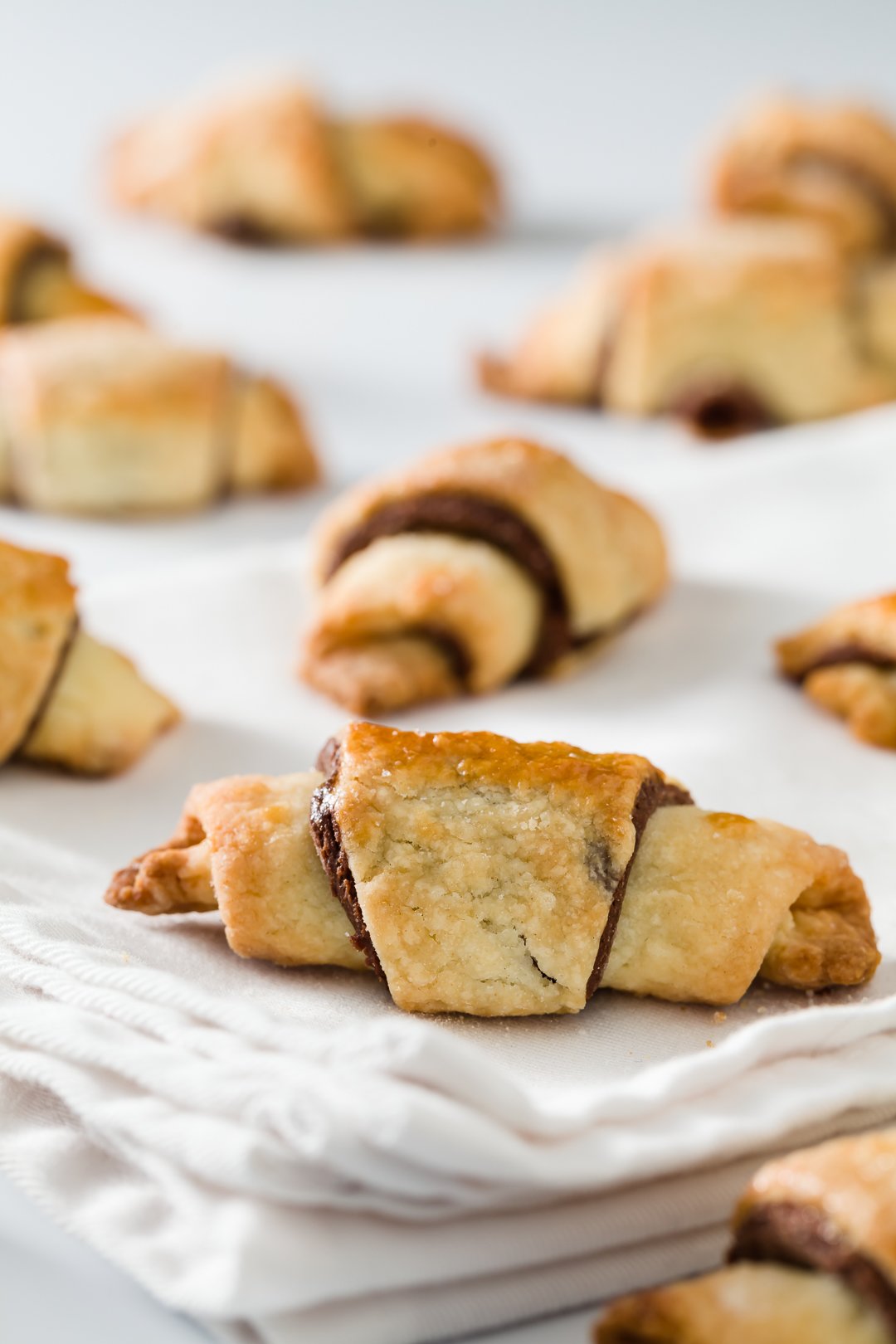 Obviously, you can and should eat rugelach whenever, but I wanted to point out that rugelach are a great treat to make at holiday cookie parties if you are looking for something to represent Hanukkah.

These particular rugelach are also wonderful for Shavuot.

Shavuot is a lesser known, but very important holiday. Shavuot celebrates the day that the Jewish people received the Torah (the Hebrew Bible). On Shavuot, it is customary to eat dairy because (according to one opinion) once the Israelites were informed that there were dietary laws that they needed to learn, they chose to eat only dairy in order to have time to learn the laws of kosher slaughter.

Each year at the Passover Seder, Jews are asked to think of the exodus from Egypt as if we had personally been there. I do think about it, and I wonder what I would have done had I been there when Moses came down with the Torah. I’m typically of the rules-are-loose-guidelines camp; my crazy chocolate cheesecake rugelach should give you a clue that I don’t like to stick within a mold. I could imagine saying, “Come on guys, we can still eat meat, we’ll just learn the Kosher thing as we go. Surely, there is some wiggle room for the first couple of months.” But, I’d like to think that if I had just seen the Red Sea part and had dined on manna falling from the sky, I would have treated these rules with reverence and seen this learning period as a great opportunity: Shavuot is a fabulous excuse to eat cheesecake, chocolate cheesecake rugelach, or if, you prefer, lots of buttercream frosting! 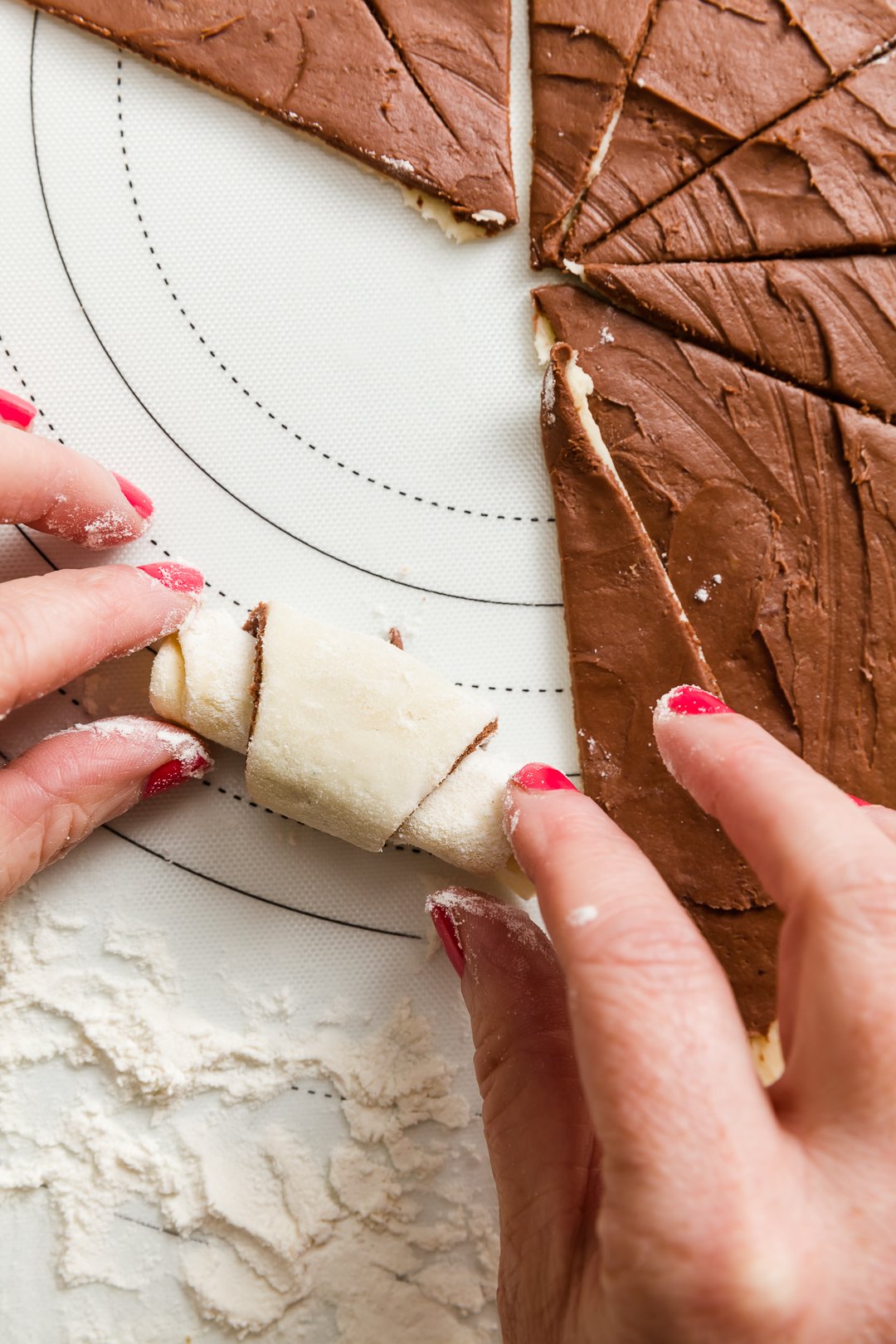