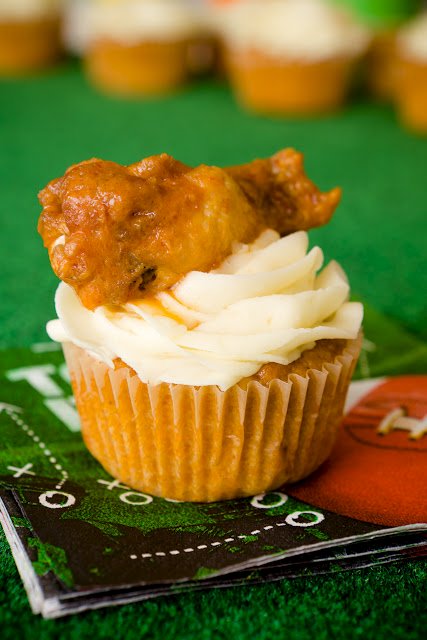 When my house started to smell like buffalo wings (there was no chicken involved at this point), I knew I had the flavor right. I didn’t expect the cupcakes to taste particularly good, but I slowly began to suspect that I was going to like the buffalo chicken cupcakes when I took a lick of my cupcake batter-laden finger.

When I tasted the cupcakes hot out of the oven, I realized that I had created a new crowd-pleasing Super Bowl tradition. These cupcakes are also perfect to bring as a tailgating appetizer or to bring to a football party at any point during the season!

Are the buffalo chicken cupcakes sweet?

They are sweet in the way that cornbread is sweet. They have sugar, but they wouldn’t make a satisfying dessert. I classify these as savory cupcakes – with hot sauce and blue cheese in the cake and a blue cheese buttercream frosting.

Are buffalo chicken cupcakes a dessert or an appetizer?

I’d serve these savory cupcakes as an appetizer.

Is there chicken in the cupcake?

No, the chicken is just on top. You can leave it off if you absolutely must.

Are the cupcakes spicy?

Whether or not the cupcakes are spicy depends on which hot sauce you use. I used a medium hot sauce and they were just a tad bit spicy.

Is the blue cheese overwhelming?

Blue cheese can easily become an overpowering flavor. I put just enough blue cheese in the cupcake and frosting to give them some tang without making the whole thing taste like blue cheese.

Which team are you rooting for?

Since St. Louis no longer has a football team, I’m perpetually rooting for the Giants. I grew up in New York so they were the team my family always cheered for.

How to Present These Cupcakes 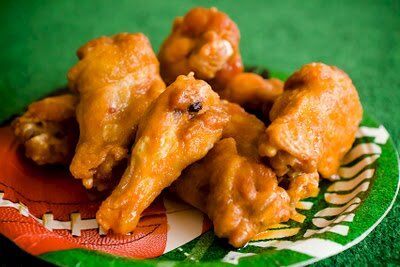 Just before serving, and to maximize the wow factor of these cupcakes, I recommend that you top them with buffalo chicken wings or buffalo chicken drummettes. Imagine the frosting as a sweet blue cheese dip and dig in!

I’ve developed a number of crowd-pleasing football and Super Bowl foods and desserts over the years – some are a bit crazy. A few of my favorites include: