Magic Bullet vs Ordinary Blender: How to Make Nut Butter 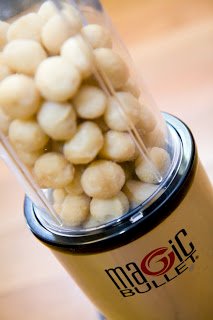 Do You Need a Magic Bullet To Make Nut Butters?

Several people told me that the best way to do it was to use a Magic Bullet. Luckily, Groom 2.0 owned a Magic Bullet, so I borrowed it and gave it a go.

What Are You Talking About? What is a Magic Bullet?

The Magic Bullet Put to the Test

I loaded up 8oz of macadamia nuts into the larger cup of the Magic Bullet. I’d been warned by Groom 2.0 that he had already broken one by blending for too long. “Use short pulses,” he said. Clearly, he understands the importance of foreplay. Don’t go too strong too fast.

Groom 2.0 also had suggested that I might end up having to use the smaller cup because nuts would get stuck on the side of the big cup and not blend. 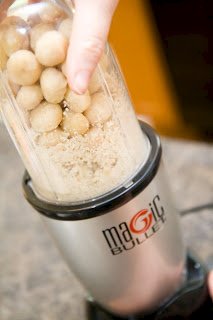 I pulsed maybe 10 times or so. Each time, I felt like I was playing a game of Trouble (the one where the dice are in the plastic sphere that you press to make them roll). The Magic Bullet has no on/off switch – you just press the bullet to make it go. Awww, yeah.

I moved some of the nuts to the smaller cup and pulsed some more. I had to keep pulsing and then shaking the nuts off the sides.

After 10 minutes or so, I did have a smooth nut butter! This was quite the exciting climax! 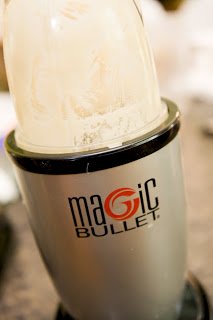 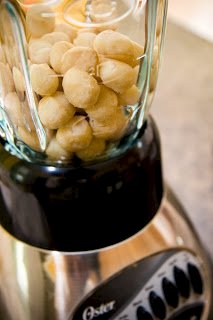 Jonathan came into the kitchen to watch the Magic Bullet fun. What guy wouldn’t want to watch? He asked an important question, “Why not make the nut butter in an ordinary blender?”

We loaded the blender up with 8oz of macadamia nuts and used the same pulsing technique. It had the same problems of nut butter getting stuck to the sides and we had to keep sticking a spatula down in the blender to push the nuts to the middle. After 10 minutes, we had smooth, creamy macadamia nut butter.

Got your own tips for making good nut butter or disagree with my stance on the Magic Bullet? Let me know in the comments.

Do forgive the dirty talk – I couldn’t write about nut butter and the Magic Bullet without going there.