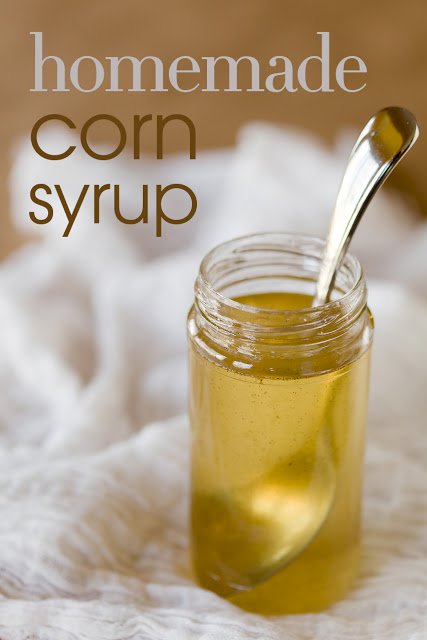 Every time I discover a way to make a popular commercial product at home, my mind is blown. Homemade corn syrup is not something I had ever considered making, but much like homemade grenadine, homemade Baileys, homemade goldfish crackers, and homemade Oreo cookies, I am so glad that I did. While I wouldn’t make any of these products from scratch every single time (I’m human and laziness often wins), every item on the list is better that its store-bought counterpart.

When I posted on the Cupcake Project Facebook page that I was making something with two pounds of sugar and corn, the guesses started rolling in. Several of you (the first being Amanda Johnson) correctly surmised that I was making homemade corn syrup (have a look at the post to see the other guesses). Susan Milner wasn’t so sure: “I thought corn syrup at first, too, but corn syrup doesn’t taste like corn. It’s just sugar from corn, so I say it’s a corn whiskey moonshine for sure!” I didn’t make moonshine, but Susan is correct. Store-bought corn syrup doesn’t taste like corn. In fact, this corn syrup is quite a different product from what you are used to (see the corn syrup Wikipedia page for details on how commercial corn syrup is made). This corn syrup is a thick sugar syrup that has a mild, pleasing taste of sweet corn.

Q. Will recipes made with this corn syrup all end up tasting like corn?
A. I depends on the recipe – how many other flavors are present and how strong they are. The corn flavor in homemade corn syrup is very mild and it is easily overpowered. I like the corn flavor, but if you are looking for a corn syrup substitute and don’t want it taste like corn, you can leave the corn off entirely and just make a thick sugar syrup (I’ll show you how below).

Q. What is the shelf life of homemade corn syrup?
A. I haven’t put this to the test, but Stella from Brave Tart (whose recipe I used) says that it lasts indefinitely in the refrigerator.

To make homemade corn syrup you need a vanilla bean. Vanilla beans can be expensive. In the Whole Foods near my house, one bean costs six dollars. If you plan to bake vanilla cupcakes on a regular basis, I recommend purchasing vanilla beans online – you’ll save a ton of money. These beans are incredibly fresh and my mailbox has never smelled as good as the day the beans arrived. (View on Amazon) [paid link] 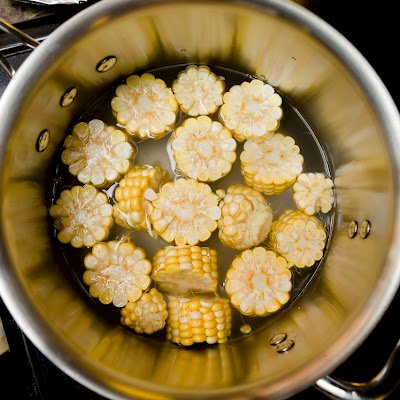 The recipe I used comes from Stella Parks of BraveTart. I’ve rewritten it and added my own notes here.

Homemade corn syrup is not something I had ever considered making, but much like homemade grenadine, I am so glad that I did.
Course Condiments
Cuisine American
Prep Time 15 minutes
Cook Time 1 hour
Total Time 1 hour 15 minutes
Servings 36 servings
Calories 107kcal
Author Stefani