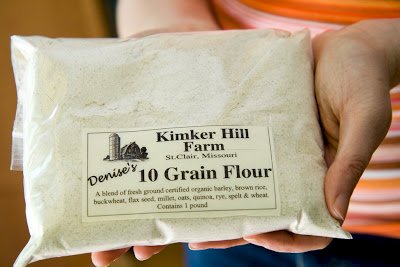 Baking with multigrain flour was not something I had considered until I received a package of multigrain flour through the combined community supported agriculture (CCSA) program I am a part of. When I joined the CCSA, I had no idea that I would also get locally milled flour! This flour was destined to go in a cupcake!

Can You Directly Substitute Multigrain Flour For White Flour?

I tried directly substituting multigrain flour for white flour, but it didn’t work as I had hoped. My test cupcake was far too crumbly – it completely fell apart when I picked it up. It seemed the multigrain flour had absorbed more of the cake moisture than white flour would have.

To solve this problem, I added an extra egg and some extra oil to the recipe. My cupcakes stuck together perfectly.

Note: My friend Lori of Life in Webster Groves used the same 10 grain flour to make a strawberry bread. She also found that she needed to increase the liquid to make her recipe work.

How Does Multigrain Flour Affect the Taste of Your Baking?

Multigrain flour is going to taste different than white flour. The big difference is that it actually has a taste. White flour takes on other flavors of your baking, while multigrain brings its own flavor elements.

How Does Multigrain Flour Affect the Texture of Your Baking?

Not surprisingly, the multigrain flour caused my cupcakes to be more grainy. This isn’t a bad thing, just something to be aware of. The change in texture led many to feel that they were more muffiny than cupcakey. However, as noted above, they were plenty moist after my modifications.

Everything I wrote about multigrain flour above will vary depending on the exact mix of grains in your multigrain flour. I highly recommend experimenting with some different flours. Let me know how it goes.