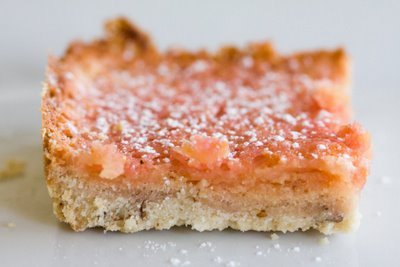 Prickly pear lemon bars are sweet and tangy and have a buttery crust that I could eat all by itself. They are a variation on my favorite lemon lime squares. While I wouldn’t make the prickly pear bars over the lemon lime squares every time, they are great for something different and the pink color is so striking! 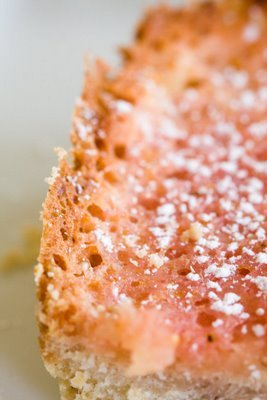 As a pregnant foodie, I often find myself at restaurants with top-tier bartenders and have recently begun to challenge them to make me tasty virgin drinks. Last night at a restaurant, I had a drink with almond syrup, pear nectar, pomegranate, and lemon that was like nothing I had ever tasted before – in a good way. But (more relevant to this post )earlier in the week I visited a different local restaurant that had several virgin drink options on the menu. The bartender, Keith, recommended a drink that featured prickly pear and lemonade. He gave me a shot of the prickly pear juice on its own to entice me. Loved it! I proceeded to order the drink – which rocked my world. I decided right then that prickly pear would be the flavor of the week. 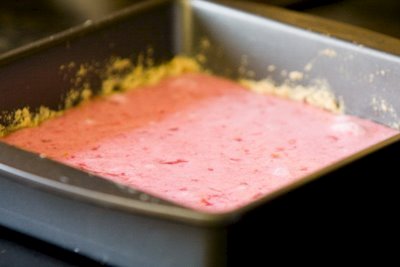 The prickly pear lemon bar recipe that I came up with was based on a recipe called Lemony Lime Squares that I originally found in a newspaper (the clipping is so old that I can’t tell which paper) as an adaptation from a recipe in the book Low-fat & Luscious Desserts by the American Heart Association [paid link]. Here is my adaptation:

Prickly pear lemon bars are sweet and tangy and have a buttery crust that I could eat all by itself. They are a variation on my favorite lemon-lime squares.
Course Dessert
Cuisine American
Prep Time 10 minutes
Cook Time 35 minutes
Total Time 45 minutes
Servings 16 bars
Calories 109kcal
Author Stefani

Prepare the topping and bake 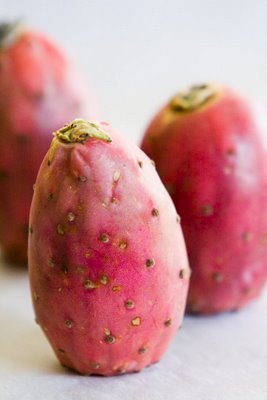 Prickly pear is not easy to find in St. Louis. Some of my friends from other parts of the country have informed me that it’s practically a weed where they live. I thought for sure that our international supermarket would carry prickly pear, but they said they wouldn’t carry it until next month. Then, I checked a Mexican grocery and they told me to check the Asian grocery. Surprisingly, I found it at Whole Foods. I shop there almost daily, but I had never noticed prickly pears so that was the last place that I looked for them.

I was informed by my Twitter friend c_ellis that our local grocery store, Schnucks, sometimes carries prickly pear sorbet, so your local store might, too. 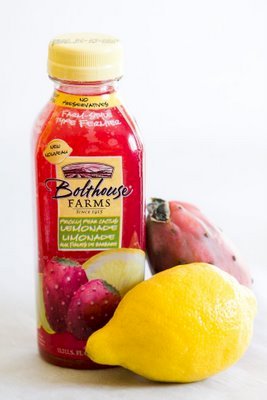 Bolthouse Farms made a prickly pear cactus lemonade which will give you a taste of the flavor, but I found it to be way too sweet.

Lastly, you could always order one of the many prickly pear products available online [paid link]. You can choose from syrups, jellies and jams, and candies.

One More Photo of the Prickly Pear Lemon Bars, Just for Kicks 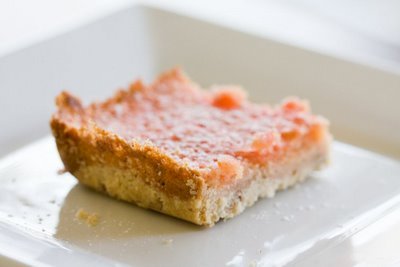