If you had asked me about stuffing last summer, I would have assumed that you were speaking of teddy bear innards and told you about my stuffing-related run in with the law (I’ll share that at the end of this post).  This summer, however, my focus is on the edible kind of stuffing – savory bread pudding loaded with farm-fresh vegetables.

Serve summertime stuffing shots in snazzy shot glasses at your next dinner party.  Call the course an amuse-bouche rather than an appetizer for added hip points. Or, if you are a purist – someone who believes that stuffing must literally be stuffed in something – stay tuned for my next post. 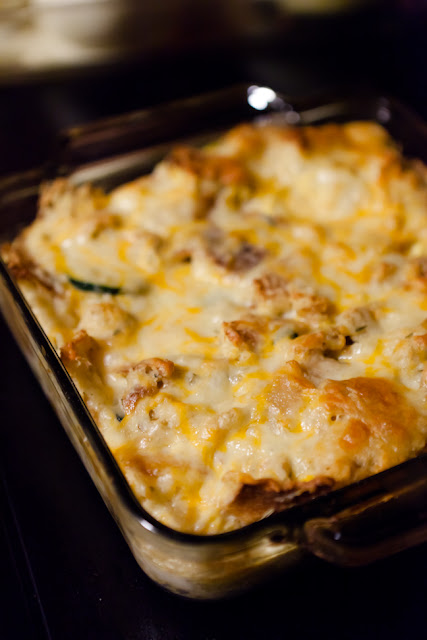 I got the recipe for this stuffing by modifying the savory zucchini and goat cheese bread pudding recipe from The Barefoot Kitchen.  One thing that I loved about this stuffing is the cheese!  Why doesn’t stuffing always have cheese?  You can’t go wrong with bread and cheese!  In the version of this stuffing shown above, I used a blend of shredded Mexican cheeses, but you can personalize the recipe by using your favorite cheese.

Join the free mailing list to receive the latest recipes, tips, and tricks by email!
Print Pin
3.5 from 2 votes

My Stuffing-Related Run In With the Law

Jonathan and I have a LoveSac. Get your mind out of the gutter; it’s just a gourmet version of a big bean bag chair (see above).  The LoveSac had seen way too much love (in the form of piss and puke) from our now deceased poodle, Scruffles.  Jonathan (cleanup master for all household messes – a role he both takes pride in and despises) was able to get the outside of the sac clean, but the inside needed new stuffing.  How does one re-stuff a sack?

Our first step in Mission Re-stuff was to dispose of the old sac innards. “No problem,” I said.  This step didn’t take a stuffing MacGyver.  We would just find the nearest dumpster and dump the stuffing.  Jonathan warned me that this was not legal.  “It’s a dumpster, it’s made for dumping,” I replied.  “It’s no big deal.”  Our car ride to the dumpster consisted of a diatribe on what life for our unborn child would be like (I was pregnant at the time) if both of his parents were in jail.

Things were looking good as we pulled wads and wads of stinky stuffing out of the LoveSac and into the dumpster; even Jonathan had begun to relax.  As the cop car pulled up and the the officer emerged and approached us, I saw the reflection of my tail between my legs.  No bail was necessary, but it may as well have been in Jonathan’s mind.  He was right.  Look, I even put it in writing.

After removing the rest of the stuffing into trash bags at our house, we took the LoveSac to Build-A-Bear Workshop and spent an hour at their bear stuffing machine. The best part: We got to put a heart inside of our LoveSac and make a wish. Our LoveSac is now truly filled with love.