Snickerdoodle Cupcakes: Cupcakes with a Surprise Inside

While those snickerdoodle cupcakes sounded great, I opted to do things my own way. 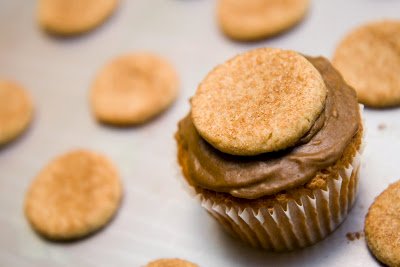 The very first taster – The first taster of the snickerdoodle cupcake was a friend of mine with whom I was playing a game of spades. As soon as she started eating the cupcake, she lost all ability to concentrate on the game. I took this as a good sign, but I really didn’t need to guess for long about her opinion of the cupcake. She “oohed and ahhed” for quite a few minutes about not only the flavor, but how amazing it was that there was a cookie baked in the middle. She was this cupcake’s number one fan!

Me – I thought they were delicious. However, I was a bit frustrated that the cookie blended into the cake so much. Despite my first taster’s comments about the cookie being such a nice treat in the cupcake, I could hardly tell where the cookie ended and the cake started. If I looked, I could see where the cookie was – which was neat – but it tasted just like the cake. Like Bride and Groom 2.0, I adored the frosting!

I made the snickerdoodle cupcake recipe by slightly modifying How Stuff Works’ caramelized sugar cake. I have reprinted it with my modifications below. 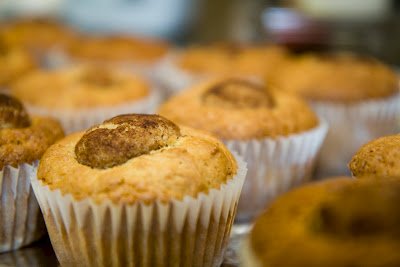 Bake at 375 F for 25 minutes or until the top bounces back when touched lightly. As you can see above, they look kind of ugly before they are frosted. However, it’s also sort of fun to see the cookie popping out. I almost didn’t want to frost them.

I fell in love with penuche frosting when I made my quinoa cupcakes. I used the same recipe that I used on those cupcakes, only I added cinnamon to make it more snickerdoodly.

I got the original penuche frosting recipe from Southern Food on About.com.

(Speaking of snickerdoodle cookies. If you love them and these cupcakes, you may also love my snickerdoodle bars! They are perfect for a crowd!)

Snickerdoodle Cupcakes: Cupcakes with a Surprise Inside

See this post for more ideas to enhance this cupcake.