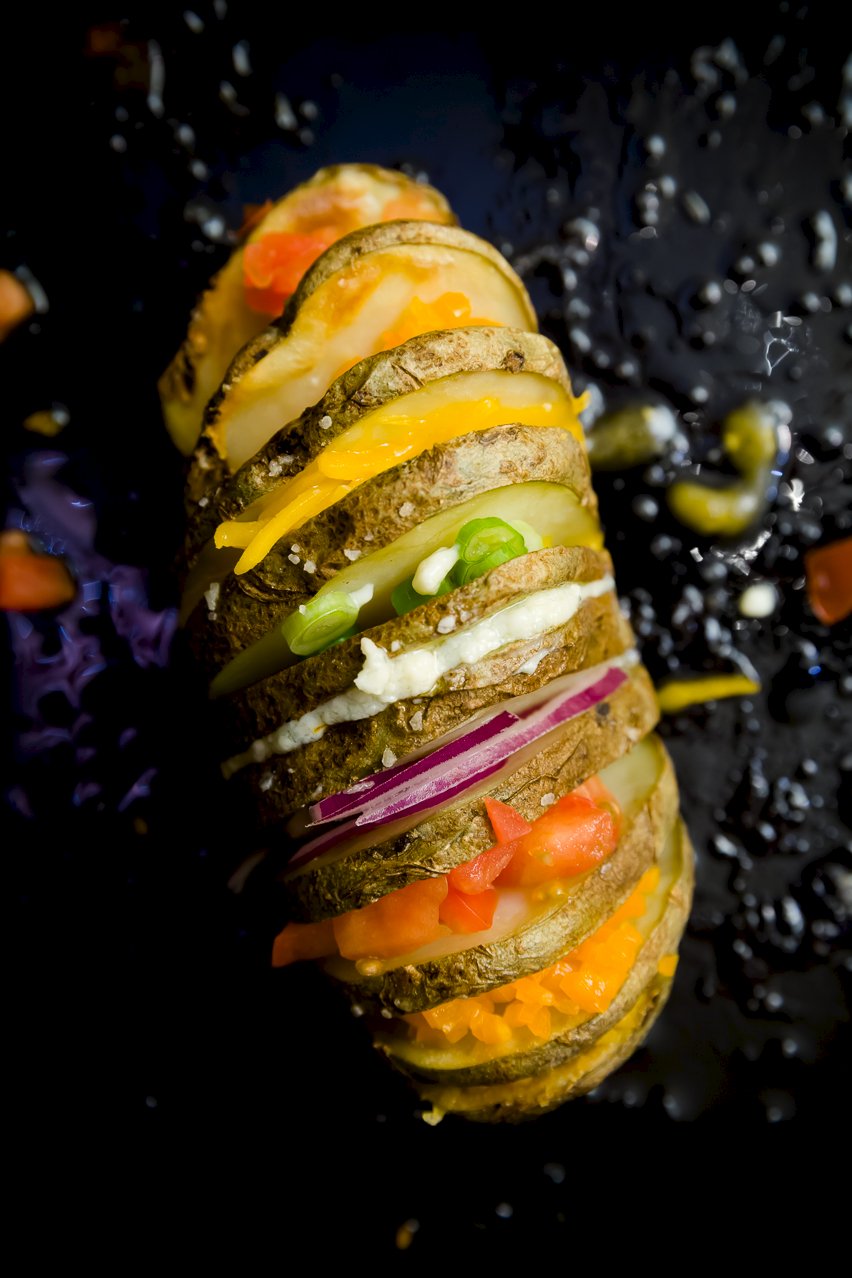 Hasselback potatoes (named after the restaurant at the Hasselbacken Hotel in Stockholm, Sweden) are a showstopping cross between thick-cut fries and loaded baked potatoes.  They have the same appeal as pull-apart bread – ripping off pieces is irresistible!  Each piping hot potato piece is crispy on the outside and soft on the inside.

In honor of  St. Patrick’s Day, I made rainbow Hasselback potatoes, filling each potato gap with a colored veggie or cheese.  My family and I had a blast searching the grocery store to find just the right ingredients for each color.  Here’s what we came up with: 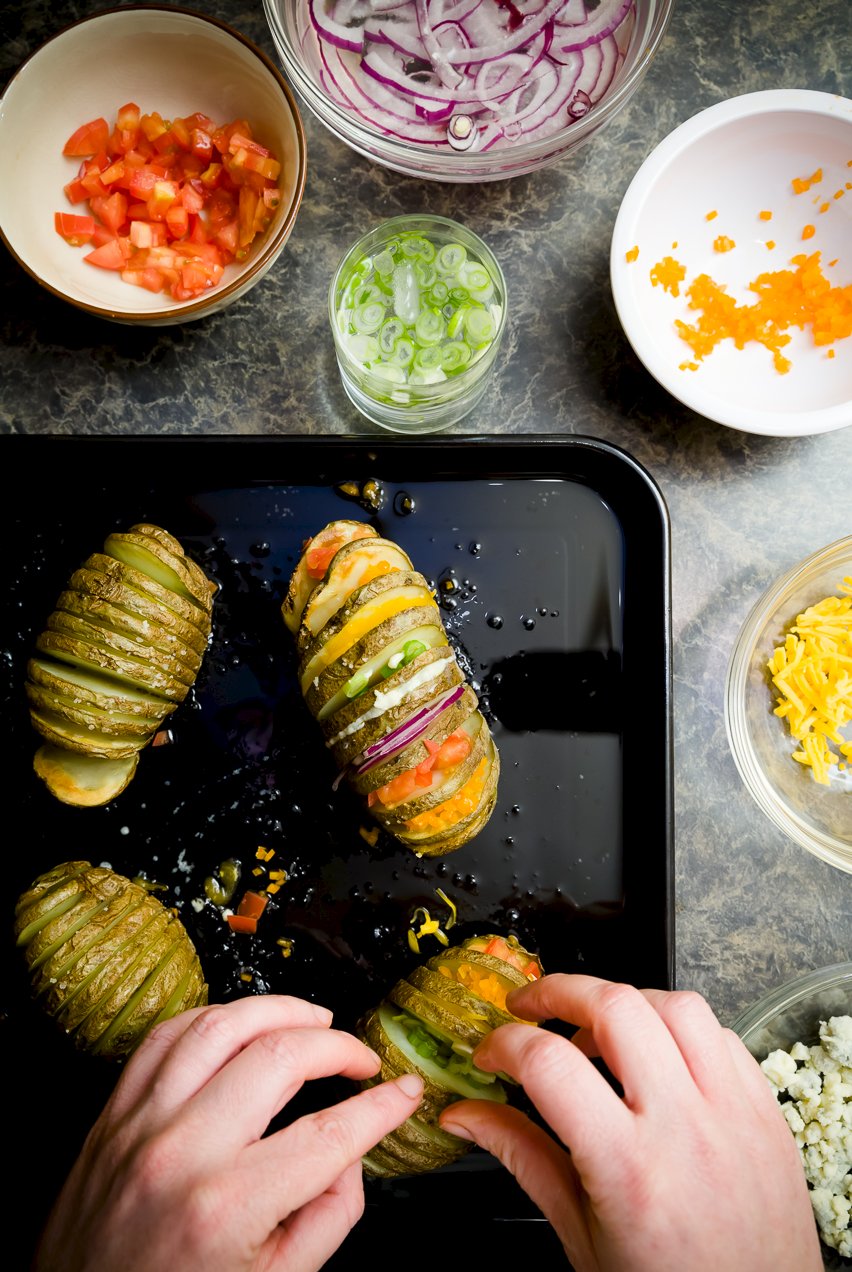 Although Hasselback potatoes look super fancy, they are not all that hard to prepare. 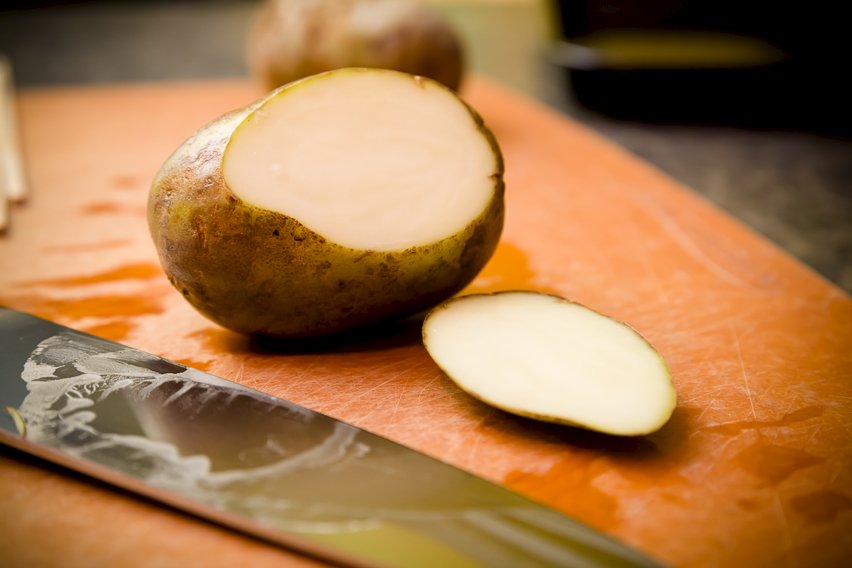 First, cut a small slice off of the potato so that it can lay flat.  Then, it’s time for the slicing.  Here’s the secret:

The secret is cheap chopsticks!  Don’t use nice ones because you are going to scratch them up. 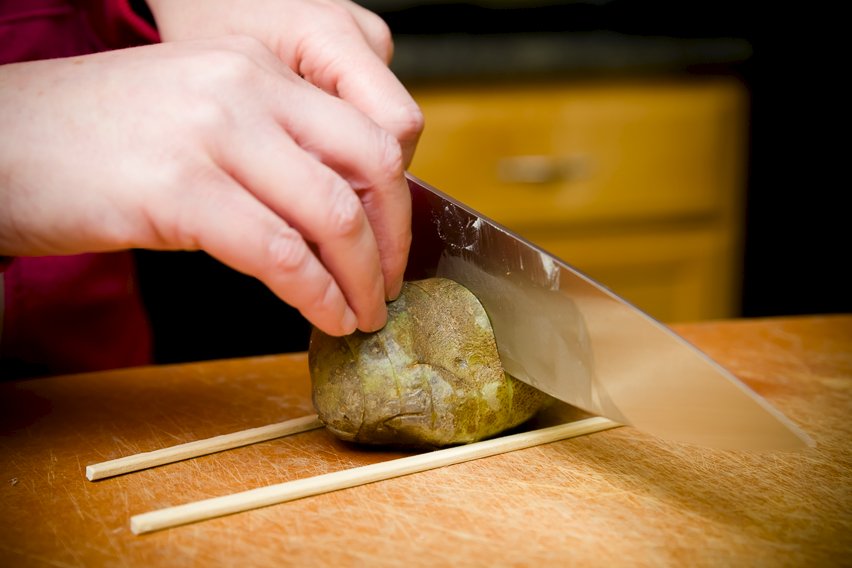 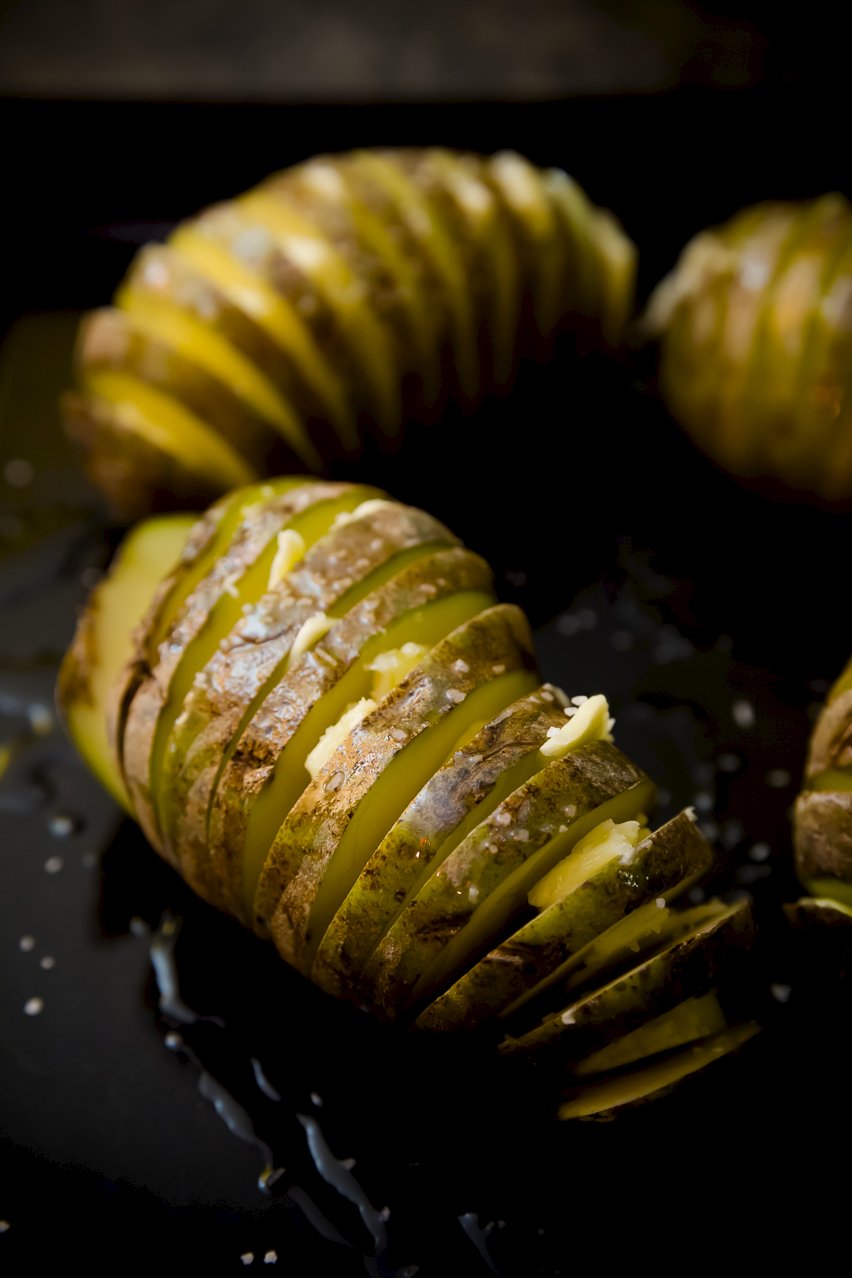 Put tiny pats of butter between each potato slice, drizzle with oil, sprinkle with kosher salt, and bake.  I never said this was going to be healthy.

Then, you have two choices.  You can bake for a full hour and add the rainbow fun after the potato is all done.  The potato will still be hot enough to melt the cheeses, but the peppers, tomatoes, and onions will be raw. 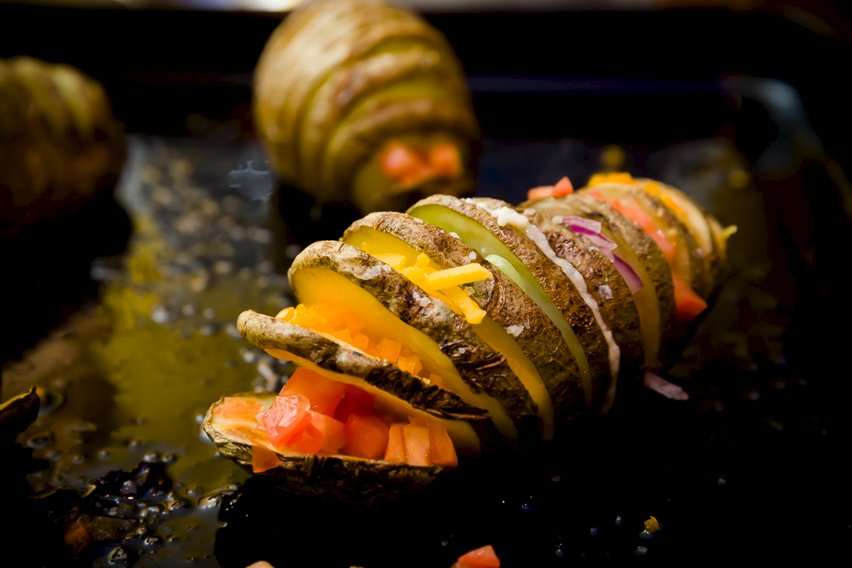 Or, you can remove the potatoes after 45 minutes, add the fillings, and bake with the fillings for the last fifteen minutes.  I think this is the tastier option, but keep in mind that if you do this, the colors will be more muted and the fillings will sink a bit into the potato during cooking: 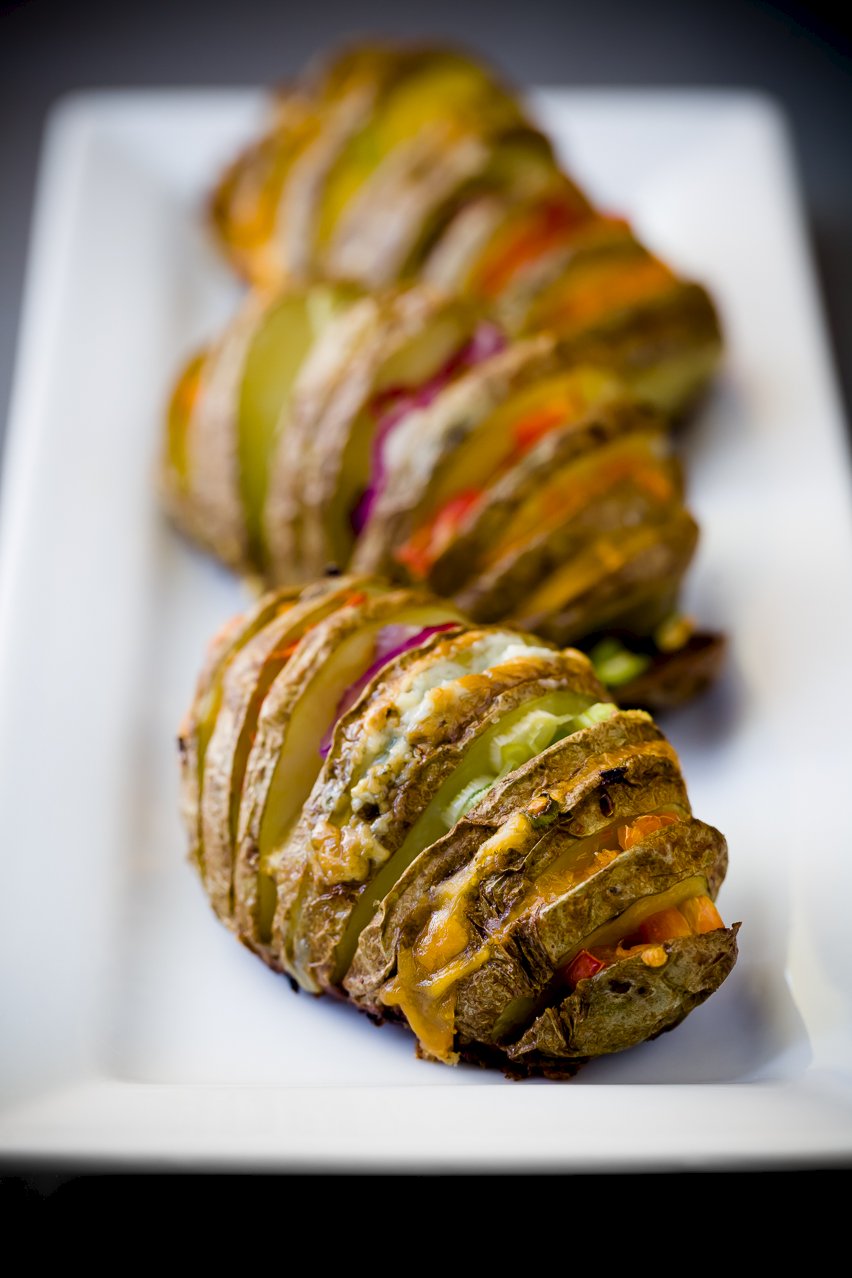 You can’t go wrong either way.  You can even create your own fillings.  How about avocado for green or prosciutto for red?

What to Serve with these Potatoes

They are amazing with steak or hamburgers. But, if you want to try something different, consider serving them with bison chili!