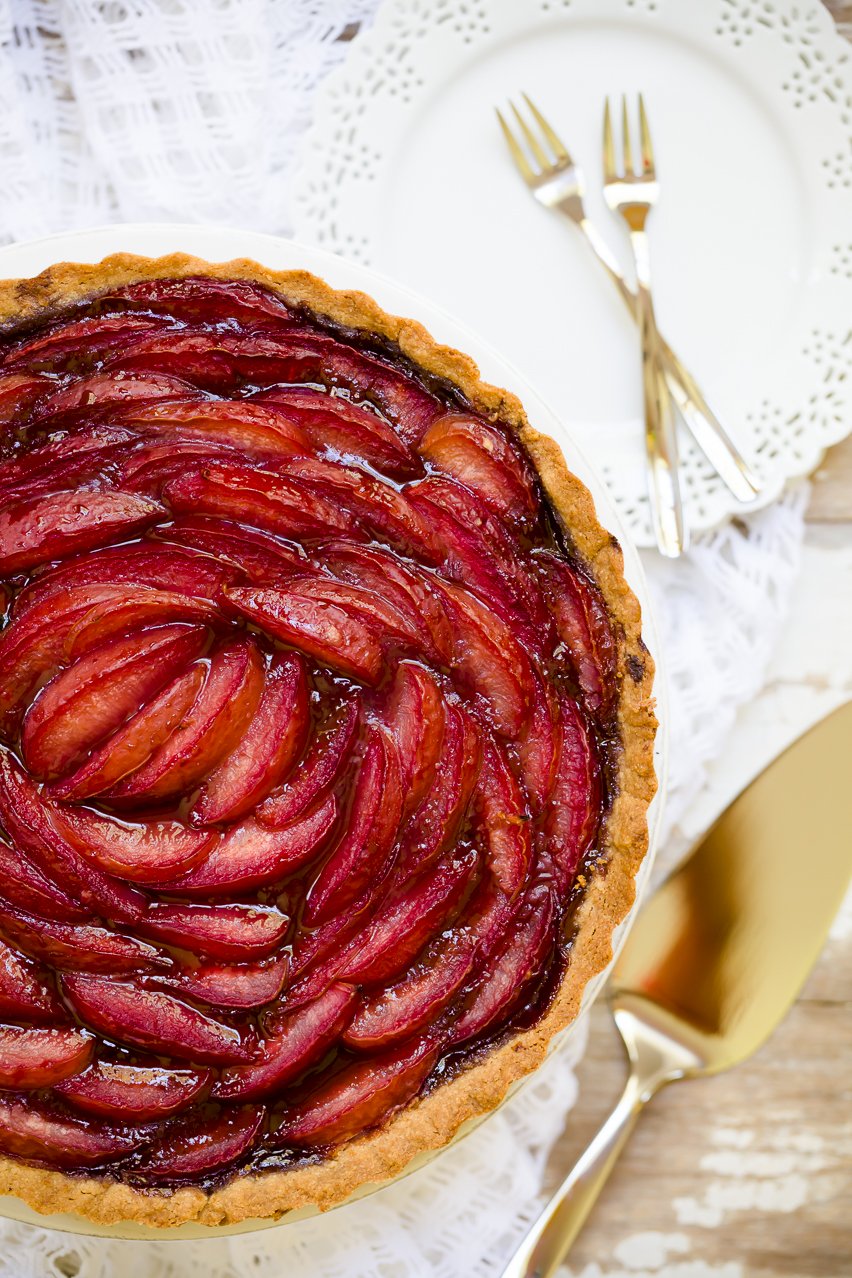 We eat more pluots (a plum and apricot hybrid) in our house than any other summer fruit.  They are in our fruit bowl from the first time we see them on the shelves in May until a chill hits the air and they disappear from stores.  It had never occurred to me to bake with pluots until I saw someone post a pluot pie on Instagram.  I saw the fact that I had never baked with pluots as an extreme baking oversight.  My pluots needed to be baked ASAP and thus this pluot and port wine tart was born.

I have a new appreciation for tarts.  First off, their crust is essentially a cookie.  I love flaky pie crust as much as the next person, but I love cookies more.  As a bonus, tart crusts require no rolling; you simply press the dough into the pan.  So easy!  Also, tarts are gorgeous.  While pies can be pretty in a rustic, homey sort of way, tarts are works of art. 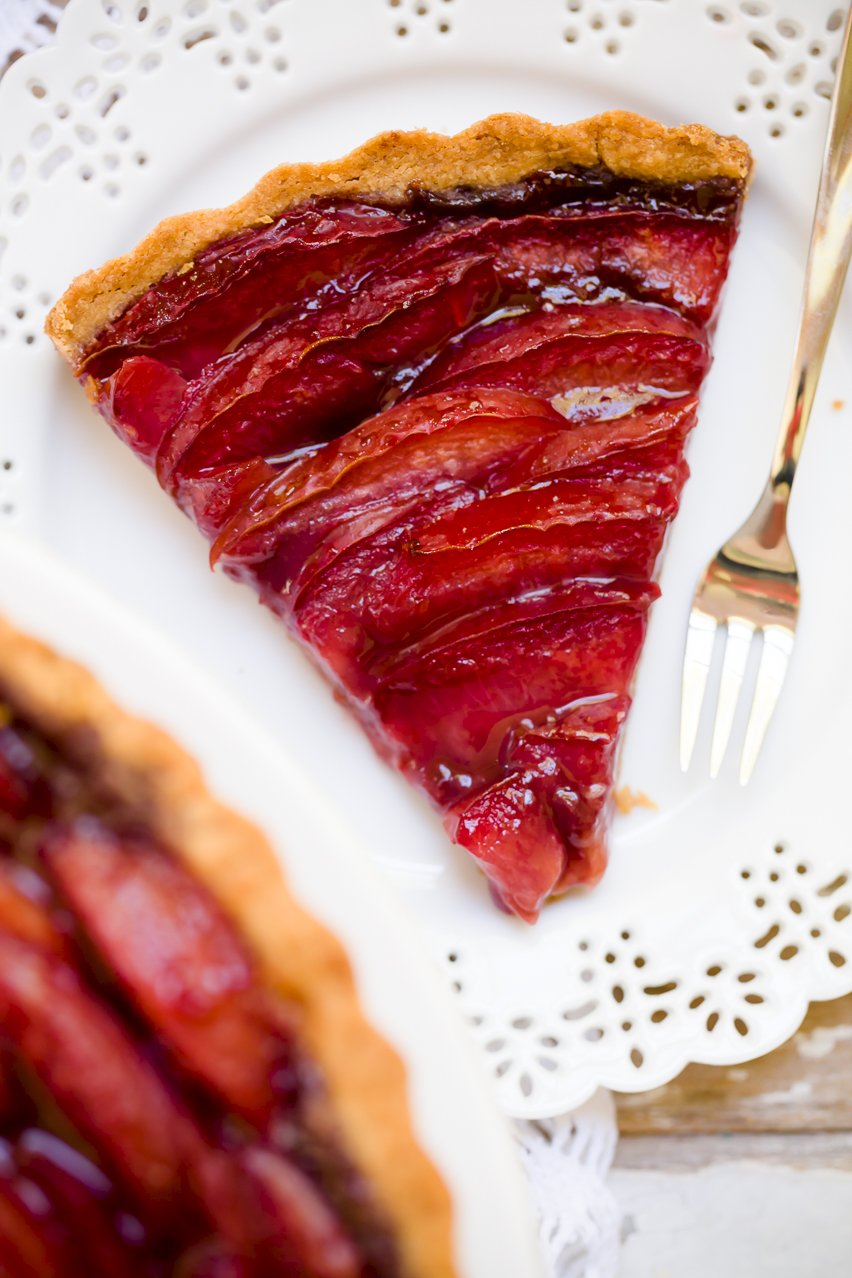 This pluot tart is prepared by cooking down port wine with sugar and a cinnamon stick to create a fragrant, warm, and complex syrup.  This syrup is then poured over sliced pluots.  The fruit rests on a brown sugar crust that tastes like a crispy chocolate chip cookie (minus the chips).

If you are unable to find pluots, this tart can easily be made with other stone fruits like plums, nectarines, and peaches. 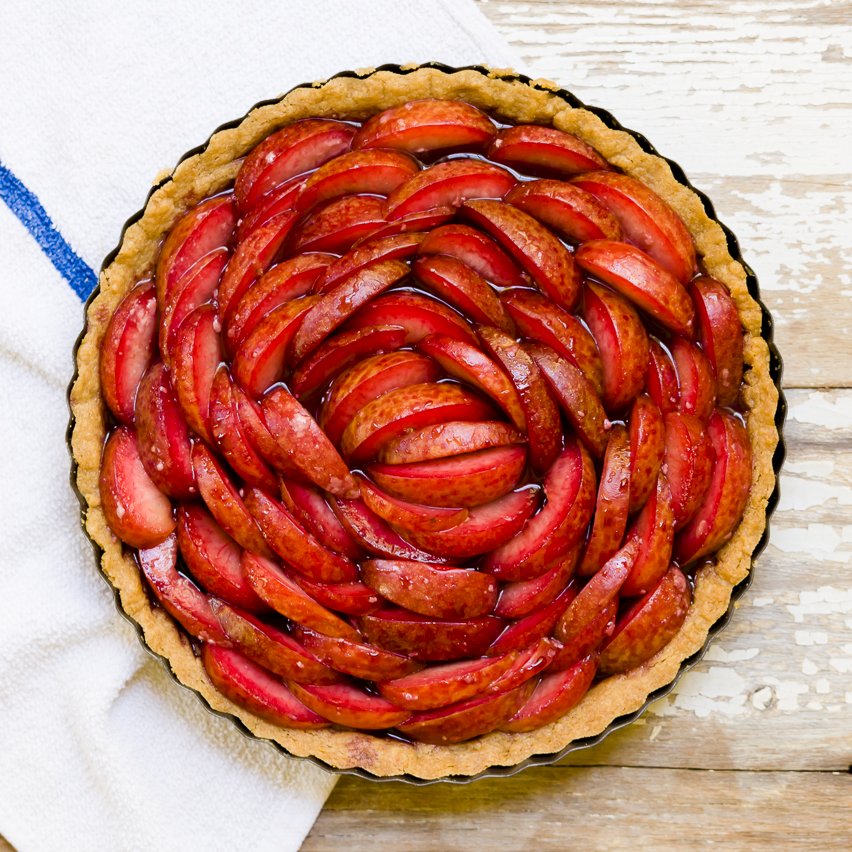 My recipe is adapted from two others, the rustic plum and port tart from Bon Appétit and the brown sugar tart crust from Healthy Delicious. Try making this with the salted honey crust that I use on my jam tart for a nice variation. 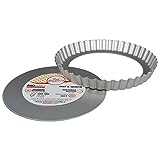 I know that a tart pan is one more piece of specialty bakeware to own.  But, it’s not a pricey one and, once you own a tart pan, you may find yourself hooked on tarts!

This tart can also work with plums, peaches, or nectarines.
If you cut the tart before it cools, the cut won't be as clean. Juice will spill all over. It will still taste good, but expect a delicious mess.