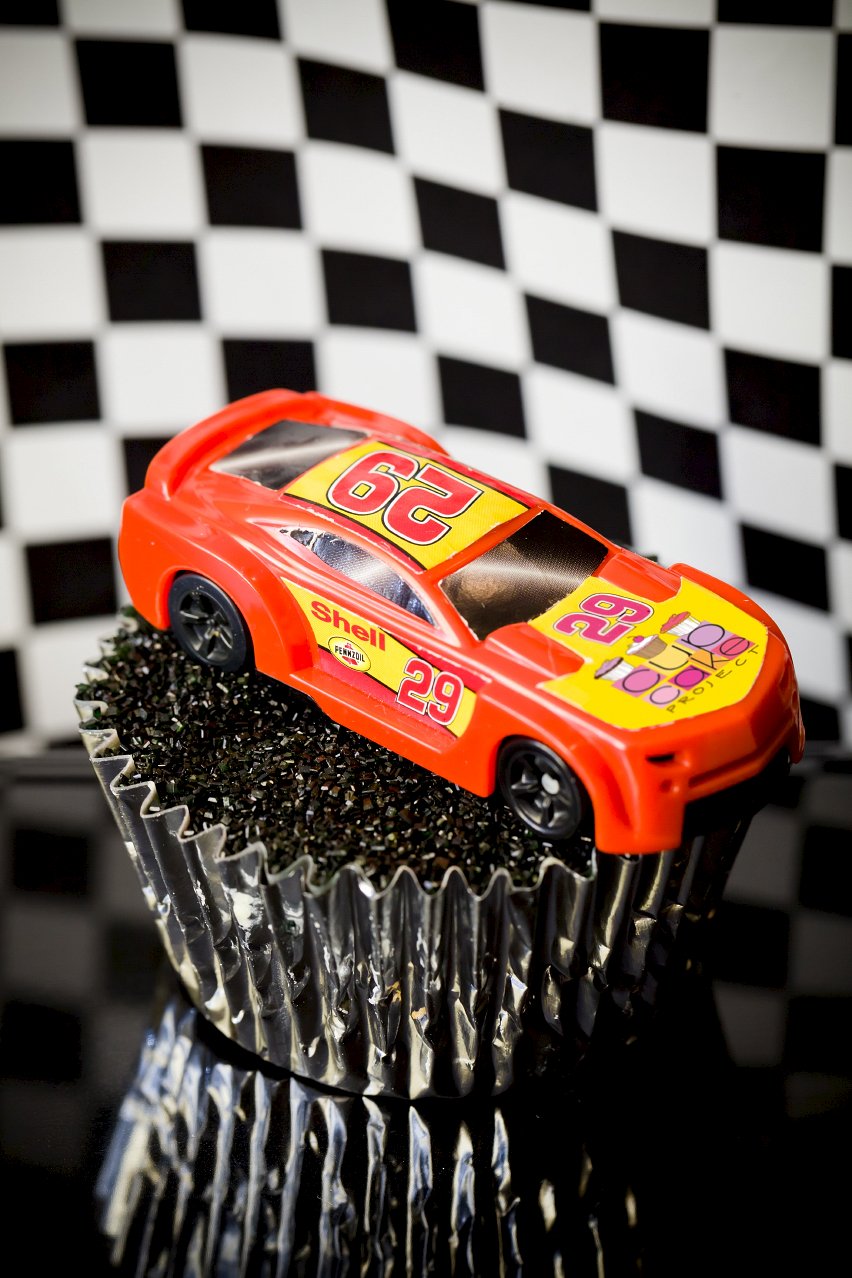 This NASCAR cupcake is for Nanette Biddle Taylor who posted the following on the Cupcake Project Facebook Page last week:

Might I suggest some type of NASCAR-themed cupcake in honor of the start of the racing season at Daytona in less than 10 days??? I’m having withdrawals and can’t wait for Daytona.

After seeing Nanette’s request, I polled the Cupcake Project Facebook Community to see what types of food you thought best represented NASCAR.  Beer was the clear winner!  I’ve been around that track before.  If you want a beer cupcake, check out my beer cheese cupcakes, Hefeweizen (wheat beer) cupcakes, or my cupcakes with a built-in cup for beer.  Another popular food on the list was hot dogs; if you want to make a hot dog cupcake for NASCAR, I’ve got a recipe for that as well.  So, I was forced to race toward another popular suggestion – pork rinds!

Pork rinds are a definite part of NASCAR culture – so much so that NASCAR celeb Junior Johnson created his own line of pork rinds (I haven’t tried them, but apparently they are quite good).

Oddly, I’m not the first person to make a pork rind cupcake.  It’s been done before for people on low-carb diets.  These recipes call for grinding up pork rinds and using that as flour (hey – that makes the cupcakes gluten-free too!).  I wanted my pork rind cupcakes to have more of a normal cupcake rise, so I used regular all-purpose flour plus ground pork rinds in my cupcakes.

Since pork rinds are often salt and vinegar flavored, I decided to use that flavor profile for my pork rind cupcakes.  I couldn’t quite get the idea of NASCAR and beer out of my mind, so I topped these cupcakes with a beer glaze.

“Yuck” is a strong word.  I’d use the word “different” to describe these NASCAR cupcakes. If you’ve ever had salt and vinegar potato chips (or pork rinds), you know that the flavor takes some getting used to.  When faced with that combination in a cupcake, it’s a whole new learning curve for your palate.  The pork rinds make these cupcakes a little greasy (not surprising and not necessarily a bad thing) and lend an intense bacon-like flavor (picture your salt and vinegar chips dunked in bacon dip).  Don’t think of these cupcakes as a dessert – think of them as pork rinds in cupcake form and see if the taste drives you to seconds.

Salt and Vinegar Pork Rind Cupcakes with a Beer Glaze

While researching Junior Johnson due to his pork rinds, I learned that he has a brand of moonshine, Midnight Moon, and that moonshine is a huge part of NASCAR history (funny that no one in the Facebook community suggested moonshine as a NASCAR thing).  I now have a book that I want to read and I might have to make a moonshine cupcake soon!