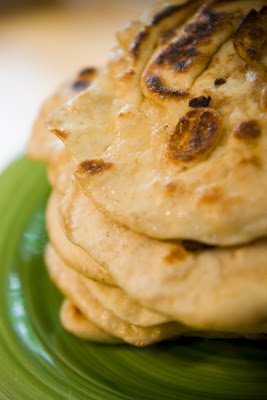 Naan is one of my favorite components of an Indian meal. Sometimes when I go to an Indian buffet, I’ll hit the buffet one last time for naan only so that it is the last flavor in my mouth when I walk out the door.

Naan is an Indian bread that is similar to pita, but so much better (don’t even try to debate it with me)! It is traditionally made in a tandoor (a clay oven), but I made this naan recipe in a cast iron skillet.

Why Did I Make a Naan Recipe?

My Taste & Create partner this month was Heaven is Chocolate, Cheese, and Carbs (is that not the coolest blog name ever?). She had a naan recipe on her blog and I was all over it. What made picking the naan recipe extra fun was that it came from Cooking 4 All Seasons and HICCAC made it last month as her entry for Taste & Create. It’s like a continuing chain of Taste & Create love.

How Did the Naan Recipe Compare to Naan I’ve Tried at Indian Restaurants?

I won’t say that this naan recipe was better than that of the naan I get at my favorite Indian restaurant. I will, however, say that it was just as good. It was also not that hard to make. You may recall that my last attempt to use yeast was a complete failure. The failure was due in part to using the wrong kind of yeast and not warming the milk. This time, I followed directions and it was a breeze. If you can make pancakes, you can make naan.

As mentioned above, this recipe came from Cooking 4 All Seasons via Heaven is Chocolate, Cheese, and Carbs. I am reprinting it with my notes. I also left out the sesame seeds that were in the original recipe because I didn’t think they were necessary.
Join the free mailing list to receive the latest recipes, tips, and tricks by email! 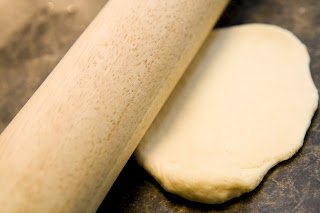 Roll out into triangles, dusting lightly with flour as needed. 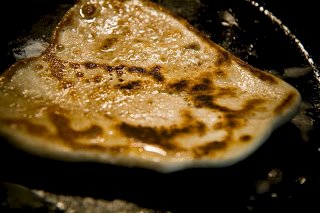 Will There Be Naan Cupcakes?

There will not be naan cupcakes, but there will be Indian cupcakes. I baked them today and haven’t yet frosted them. I had a few issues with them, but the jury isn’t out yet. I’ll give the whole story soon.