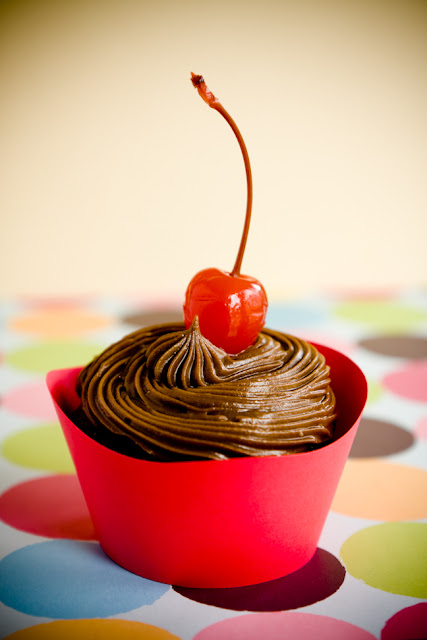 “Tastes like soda,” commented Groom 4.0 when I had him try these cherry Coke cupcakes without knowing what they were.  Score!  Goal achieved.  He went on to say that if Bride 4.0 didn’t pick these as her choice for their wedding cupcakes, he would replace his selection, Piña Colada cupcakes, with these.  He didn’t need to worry – after two bites of these moist maraschino-filled cherry Coke cupcakes, Bride 4.0 was already picturing 80 of them on her wedding cupcake stand.

Cherry Coke cupcakes require an ingredient that you don’t have and probably aren’t going to be able to find at any store near you.  Sorry!  The good news is that it’s cheap (just $5.95) and I’ll tell you where to get it online (no, I’m not being paid to write this, and I get no kickback).   The secret ingredient that is no longer a secret is Kool Kola extract from The Homemade Soda Company.  While there are quite a few recipes online for cola-flavored cupcakes, what makes mine really pop (soda-pop that is) is the cola extract.  I use it in the cake (in addition to actual cola) and to make frosting that tastes just like Coke without being watery.  You could certainly try making cherry Coke cupcakes without the extract, but they just won’t be the same. 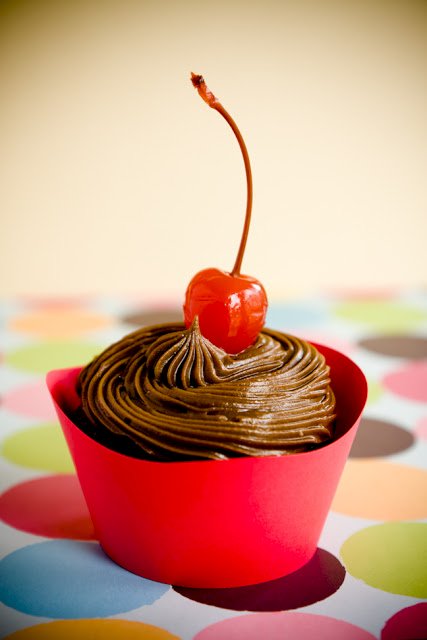 I got the idea for putting the whole maraschino cherries directly into the cupcake from Annie’s Eats.  Her version of the cherry coke cupcake is definitely worth checking out.

The cupcake recipe itself is an adaption of the root beer cake that I used for my soda fountain cupcakes.  That recipe originally came from BitterSweet.

Jonathan made these wavy Coke-inspired cupcake wrappers using our Silhouette

(read my post on creating cupcake wrappers for more on how that works).  He will not be making custom wrappers for the wedding (it would be way too much work, considering I’m baking cupcakes and he’s the wedding photographer), but we really liked the way they turned out.