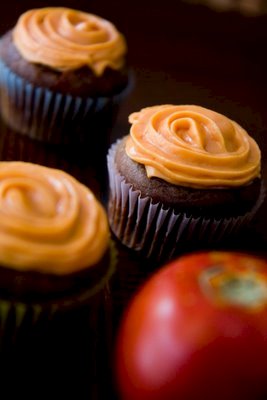 If I didn’t tell you, you probably wouldn’t guess that these cupcakes contained tomatoes and beans.

This is my second time making cupcakes with tomatoes. Remember these tomato cupcakes from last year? 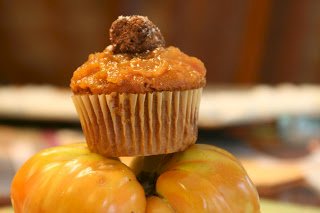 This was last year’s tomato cupcake.
Last year’s cupcakes were really tasty, but they took an entire day to bake.

This year’s baked bean and tomato cupcakes were easy, just as good, and won first prize at Tomato Fest!

Why Baked Bean and Tomato Cupcakes?

I wouldn’t have even entered Tomato Fest this year were it not for the Legume Love Affair. The Legume Love Affair is a blog event hosted by the Well-Seasoned Cook where you have to cook with legumes (duh!). I decided to bake bean cupcakes for the event.

What to put in the bean cupcake? Tomatoes, of course! Then, I remembered that Tomato Fest was coming up, and the rest is history.

What Does a Baked Bean and Tomato Cupcake Taste Like?

For the ultimate test of the baked bean and tomato cupcake, I gave one to my friend who just got (and proudly wears) this shirt from Groom 2.5: 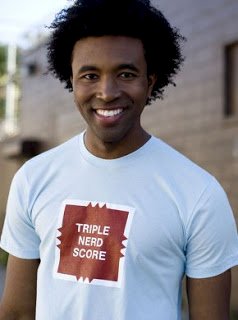 If you are a proud nerd Scrabble fanatic, you can buy this shirt from Busted Tees.

The shirt is almost as nerdy as trying to make cupcakes with tomatoes and beans. You could see why we might be friends.

The Scrabble-loving taster tried the cupcakes without knowing what they were. She thought that they tasted like a basic spice cake with some not-so-sweet strawberries. Little did she know that those were not bad strawberries, they were tomatoes! She also didn’t realize that there were beans in there.

The cupcakes were surprisingly light and super moist. It’s a nice cupcake to bake in early Autumn – try it while tomatoes are still in season, but when it starts to get just a little bit cooler.

I changed the recipe a ton, but I did get the original pinto bean cupcake inspiration from eHow.

The Frosting I frosted these cupcakes with tomato cream cheese frosting!

Jonathan says that I can’t call the cupcakes “baked bean and tomato” because I did not use a can of baked beans. However, I baked some beans so I think that it’s totally legit. What do you think?