Apple bacon cheddar cupcakes with mesquite buttercream are the boyfriend jeans of the cupcake world. They are a perfect fit for your man: they feature the magic word – bacon – and the mesquite gives them a nutty, earthy, manly finish. Yet, when you try them on (your tongue) and experience the cheddar, apple cider, and brown sugar, you’ll find that they fit you just as well.  Just like boyfriend jeans, your guy will claim they are his, but you’ll be stealing them out from under him any chance you get.

A Note About the Mesquite 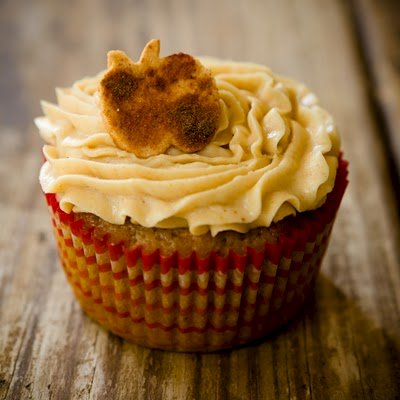 These apple bacon cheddar cupcakes feature mesquite flour in both the cake and the frosting.  If you are not familiar with mesquite flour, I recommend you read my post on mesquite tortillas where I discuss the flour and provide some links for more information.

It may be difficult to find mesquite flour in your area.  I’ve never seen it sold near me and only had some in the pantry because Navitas was nice enough to send me a free sample.  They do sell mesquite flour online, though, and I’d highly recommend it as a fun food splurge.

Note: If you don't have mesquite flour (or even if you do and want to try something different), I'd recommend my apple butter brown sugar frosting as an alternate choice for these cupcakes. Apple Chip Toppers These cupcakes are topped with my homemade apple chips (get the recipe in my homemade apple chip post). Don't add the toppers until just before serving or they will get soggy.